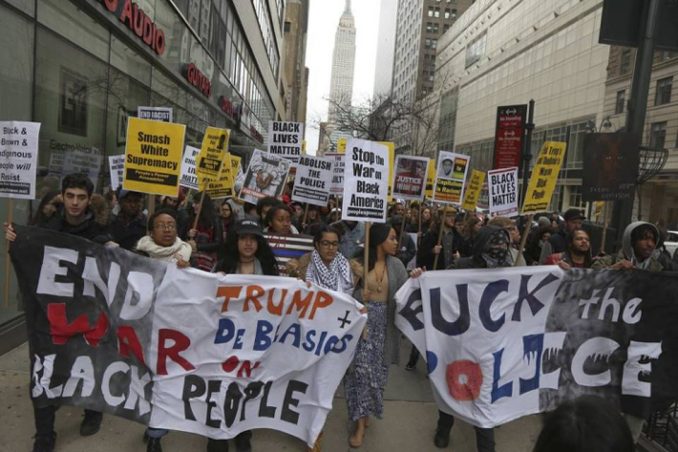 Hundreds of activists skillfully moved past police barricades to scale the stairs to Manhattan’s High Line Park and drop two banners April 1. One read, “Stop Trump and de Blasio’s War on Black People!” and the other read, “F-ck the Police.” Tourists and residents alike took photos and ­anti-racist literature as activists successfully evaded police while chanting, “Black lives, they matter here! Refugees, they matter here!” and “How do you spell racist? N-Y-P-D!”

The protest initiated by the People’s Power Assembly, and supported by NYC Shut it Down, Why Accountability, Workers World Party, Hoods 4 Justice and other activists, sought to bring the battle for Black lives to the forefront of New Yorkers’ minds through their militant action, which also took over Macy’s at Herald Square, Chelsea Market and the Whitney Museum. One person was arrested and was later released.

Many consider Mayor Bill de Blasio a political ally against Trump’s white supremacy, especially since he so often claims that New York is a “sanctuary city” for migrants and people of color. However, Broken Windows Policing, which he supports, is the height of hypocrisy, as it targets people of color primarily with unwarranted summonses and can flag undocumented migrants for deportation for minor infractions like subway fare evasion.

Despite record numbers of activists turning out to march against Trump since the November election, corporate media have been too busy diverting attention toward Russia and north Korea to focus on continued grass-roots resistance against white supremacy.

“This march showed that there is still a militant movement on the ground in NYC dedicated to the abolition of racist policing,” said Mike Bento of NYC Shut It Down. “Through the speeches and the chants, the march showed how all the recent attacks on oppressed people by the Trump administration are related to the oppression of Black people up to and including the de Blasio administration’s continued support of broken windows policing. From stop-and-frisk to project raids, Trump’s social-cleansing platform is facilitated by the continued support of racist policing by liberal politicians at the local level.”

Clare Fogerty, an organizer with People’s Power Assembly and NYC Shut It Down, had earlier attended Timothy Caughman’s funeral. Caughman had been stabbed to death March 20 by a depraved racist who had traveled from Baltimore to New York with the stated intention of murdering Black men. Local media ran stories that mentioned the murderer’s “sharp outfit” and history of fighting in the murderous U.S. military, while Caughman was a “career criminal” living in a halfway house. While the media carried on their racist ways, New York City Mayor Bill de Blasio saw Caughman’s funeral as a great media opportunity.

“De Blasio stood up at Timothy Caughman’s funeral and claimed to care about the lives of Black people,” Fogerty told WW. “If that was truly the case, he would hold the NYPD accountable for it’s continued savage treatment of Black people. He held the funeral up by 10 minutes ‘cause he was late and we were waiting for him to capitalize on the death of a Black man. He turned it into a press conference, a goddamn charade.”

The April 1 action sent a powerful message across New York — that racist state violence will be challenged wherever and whenever possible. The non-permit protest action traversed midtown to make a strong statement against white supremacy, proving once again that the real path to liberation is in the streets.