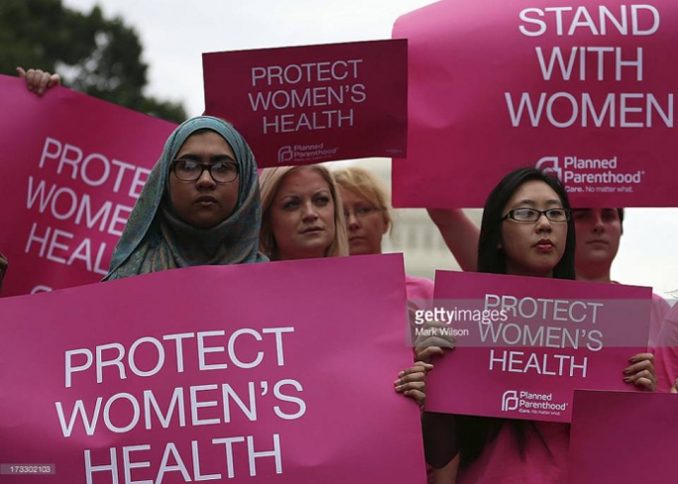 The U.S. Senate voted 51-50 on March 30 to overturn an Obama administrative rule not allowing states to defund Planned Parenthood payments for Title X patients. The House passed the same resolution in February, so it now goes to the Misogynist in Chief to be signed into law.

Collateral damage in this totally biased vote is 4 million poor women who rely on Title X of the Public Health Service Act for comprehensive family planning — which covers contraceptives but not abortion — and related preventive health services. Government payment for abortions for low-income women has been outlawed since 1976 by the Hyde Amendment.

Title X was passed by the Nixon administration in 1970, when politicians recognized the basic health care rights of low-income families or uninsured people, including those not eligible for Medicaid. They were aware of the connection between sex and science. They saw the need to make family planning accessible to poor families as part of their agenda to cut welfare payments for children.

Passing this resolution means that if states choose to defund Planned Parenthood as a service provider for Title X patients — 11 states already have such laws — that poor women, mostly young women of color (59 percent) and immigrants, often in rural areas of the Midwest and South, will have to search for new providers or go without vital health care.

Planned Parenthood serves a third of Title X patients, using $70 million a year in family planning grants to provide birth control and sexually transmitted infection and cancer screenings. The organization is singled out because it provides abortions for 3 percent of its millions of patients through more than 650 clinics nationwide.

A March 2016 Guttmacher report attributed the decline in abortions between 2008 and 2011 to limiting unintended pregnancy through more contraceptive use rather than state restrictions on abortion. It concludes: “Supporting and expanding women’s access to contraceptive services leads to lower incidence of abortion.”

But today’s predominantly male lawmakers consciously ignore the basic connection between contraception and unintended pregnancies. Added to their overriding hatred of legal, safe, accessible abortion is their contempt for and lack of compassion for all women, let alone the extra-heavy burden that poor women carry as they struggle to care for their families. By depriving poor women of easy access to contraception, this ill-advised bill will only drive desperate women to seek abortions.

Though the Republican Party lost a major opportunity to defund Planned Parenthood directly when the reactionary American Health Care Act self-destructed at the end of March, the April 2 New York Times reported that it has two more chances: attaching a defunding provision to a bill financing government operations for the rest of the year or adding one to a tax reform bill.

Vice President Mike Pence has played a significant role in the crusade to defund Planned Parenthood going back to his days in Congress when he was the first to introduce such a bill in 2007. He cast the deciding vote on March 30, when 48 Democrats were joined by two Republican women in a 50-50 tie. One senator noted ironically that Pence had not gotten the message after attending a “women’s empowerment” forum prior to the vote.

But the real irony about “women’s empowerment” was noted by British columnist Sarah Ditum in her comment on Trump’s speech at the forum: “I don’t know what that expression [women’s empowerment] means [since it] apparently no longer entails giving women any power, including the power to decide whether they want to be pregnant or not.” (independent.co.uk, March 30)

In an act of desperation in early March, Trump offered Planned Parenthood a deal: Stop performing abortions and keep receiving $550 million in federal funding. The answer was a resounding “No deal!”

Meanwhile, two days before the Senate vote, the people who deliberately created a maliciously deceptive video about Planned Parenthood — David Daleiden and Sandra Merritt of the bogus Center for Medical Progress — were indicted March 28 by the state of California on 15 felony counts. They are charged with “violating the privacy of health-care providers by recording confidential information without their consent” by using false identities in the state to conduct “interviews” about donating fetal tissue for medical research.

Their 2015 smear video was instrumental in initiating the national witch hunt against Planned Parenthood, which bolstered the demand for defunding by charging the organization with “selling baby parts.” Although several states initially investigated the organization on such charges, no evidence was found to substantiate the claims. In a clear repudiation of the video, the lawsuit calls CMP “a complex criminal enterprise conceived and executed by anti-abortion extremists.”

Validated by two recent global marches involving millions of women and their supporters demanding women’s rights, the struggle for quality, comprehensive health care for all women continues in the U.S.  As Nancy Northrup, president and CEO of the Center for Reproductive Rights, noted after the Title X vote, “[Women’s] health and rights should never be up for debate.” (March 30)