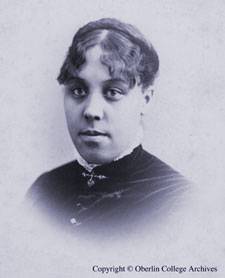 Ida Gibbs was born on Nov. 16, 1862, in Victoria, British Columbia, Canada. She later attended and completed her college education in 1884, earning a bachelor’s and a master’s degree from Oberlin College in Ohio.  She became an instructor at the M Street High School (now called the Dunbar High School) in Washington, D.C., and then retired after marrying career diplomat William Henry Hunt in 1904.

Although she traveled with her spouse on his diplomatic assignments, Gibbs Hunt continued her activism in the areas of civil rights, women’s affairs and Pan-Africanism. The Black Past website notes: “In 1905, she joined a handful of black women in founding the first Young Women’s Christian Association for African Americans in Washington, D.C.  She participated in the Niagara Movement, The Femmes de France, the Bethel Literary Society, the National Association for the Advancement of Colored People, the Washington Welfare Association, the Women’s International League for Peace and Freedom and the Red Cross.”

This biography continues: “[Hunt] wrote and gave speeches in support of peace, women’s suffrage and civil rights for African Americans. … [She] was the assistant secretary for the Second Pan-African Congress in Paris in 1919. She delivered a paper entitled ‘The “Coloured” Races and the League of Nations’ at the Third Pan-African Congress in London in 1923 and co-chaired the Conference’s Executive Committee with W.E.B. Du Bois.”

Hunt promoted her ideas internationally, and published many articles and reviews on cultural issues. She remained active in social justice organizations in the U.S. Ida Gibbs Hunt died in Washington, D.C., on Dec. 19, 1957.

The year 1919, when the second Pan-African Congress was held, was a tumultuous year for race relations in the U.S. Race riots occurred; the largest and most deadly took place in Chicago. African-American troops who had served in France were not about to suffer the same indignities as their ancestors. Out of the 1919 events came a plethora of political, cultural and literary outpourings, popularly known as the Harlem Renaissance.

By 1923, Addie Waites Hunton was focusing her attention on the world peace movement, seeing a direct link between ending imperialist war and the national liberation of colonial territories and African Americans. Funding for the Pan-African movement was then largely carried out by the International Women’s Circle for Peace and Foreign Relations, which Hunton was involved in.

Du Bois acknowledged in 1955 in “Pan-Africanism: A Mission in My Life,” that “American Negro women revived the Congress idea and a fourth Pan-African Congress was held in New York [in 1927].”  Thirteen countries were represented, including from Africa the Gold Coast, Sierra Leone, Liberia and Nigeria. Mass participation at several venues was estimated at 5,000 people.

Women at forefront of struggles in Africa, U.S.

Women played an instrumental role in the formation of the Pan-African movement from the late 19th century through the national liberation struggles of the middle-to-late-20th century. In Ghana, South Africa, Egypt, Guinea, Algeria, Angola, Guinea-Bissau, Mozambique, Zimbabwe and other states.  Women were at the forefront of the independence efforts in the areas of mass mobilization, political education, armed struggle and national reconstruction.

In the U.S., it was also the activities of such women as Mamie Till Mobley, Rosa  Parks, Jo Ann Robinson, Ella Baker, Diane Nash, Fannie Lou Hamer, Septima Clark, Gloria Richardson and many others who provided the social impetus for the re-emergence of the Civil Rights and Black Power struggles of the 1950s and 1960s.

Since the 1960s and 1970s, consciousness about the essential role of women in popular movements and intellectual culture has grown immensely.

This review of women’s philosophical and political contributions to the organizational origins of Pan-Africanism from the 1890s through the 1920s provides a glimpse of their significance. Much more work is needed by scholars, journalists and activists to uncover and expose this important history to wider audiences — including emerging generations of revolutionaries in Western industrialized countries and the broader world.