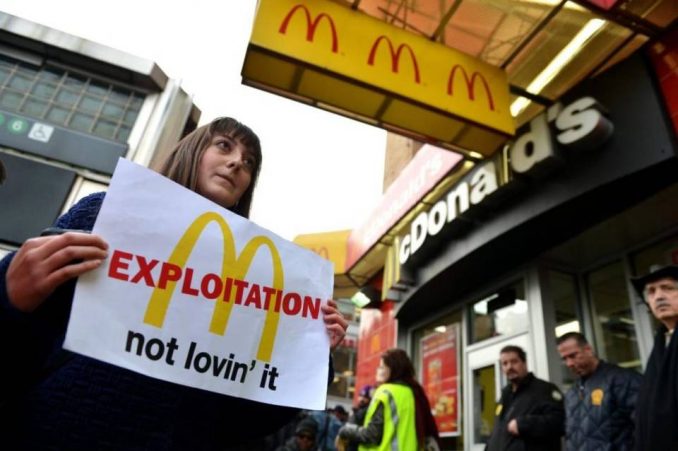 According to Department Store Union (RWDSU) President Stuart Appelbaum, “On-call scheduling is a pervasive and exploitive employment practice where workers do not find out until just before a scheduled shift if they will be required to work or not.” As Domino’s delivery worker José Sánchez explained, “You can have a schedule, but then they can change the hours without really notifying us.” ­Chipotle restaurant worker Harmonie Higgins, who is pregnant, added, “I find it hard to find time to go to doctor’s appointments and find time to rest.” (rwdsu.info, March 3)

Workers at a Washington Heights Domino’s restaurant, led by Sánchez, walked off the job the same day and held a picket line demanding fair scheduling. “We have a life,” Sánchez said at the protest. “The heads of these billion-dollar companies are home with their families, and we’re out making money for them. They should have a little more respect for us.” (manhattantimesnews, March 8)

After 15 months of failed contract negotiations, Boston public school teachers are turning up the heat on the Boston Public School District. On March 10, teachers, who are 76 percent women and are represented by the Boston Teachers Union, protested outside schools across the city to demand a fair contract.

The teachers have been working without a contract since August. “We’re fighting for working conditions that support our most vulnerable students, reducing class sizes in schools with the highest needs and providing paid family leave for all our teachers.” noted btu.org.

The BPSD has dug in and refused to provide support for students with special needs or to guarantee equal pay for workers at autonomous schools. The district even went so far as to demand that workers get a second medical opinion before going on family leave! (dailycaller.com, March 15)

The union is encouraging members and supporters to protest outside a BPSD budget meeting on March 22. “We’ll be there to let the committee and others know that we are determined to obtain a fair contract settlement,” said BTU President Richard Stutman.

If Congress fails to pass the Coal Miners Protection Act by April 30, about 12,500 retired union miners and widows of retirees will lose their pension and health care benefits. The miners, who spent their lives working in terrible conditions and sacrificed their health in the process, took lower wages to secure a healthy retirement. Congress has been debating since 2015 whether or not to pay them now that the companies they worked for have gone bankrupt. And you better believe the bosses don’t have to worry about their own survival and health care in their old age!

The plan does not require taxpayer dollars, but would transfer money from the Abandoned Mine Land fund to the 1974 Mine ­Workers’ pension plan to prevent insolvency.

Tell Congress to stop playing games with the health of retirees and pass the Miners Protection Act! Sign the petition at ­supportmineworkers.org.

A detailed study by the Economic Policy Institute, titled “Diversity in the New York City Union and Nonunion Construction Sectors,” showed that Black and Latinx workers advanced in the NYC construction industry between 2006 and 2015 thanks to unions. Not only did the number of Black and Latinx workers accepted for apprenticeships grow compared to 20 years ago, but they were paid more thanks to union representation. Now they make up 55.1 percent of NYC union construction workers.

These changes must be measured in relation to the long history of racial and gender discrimination in the building trades nationally and in particular in New York City, where change was resisted for many decades. Only after a bitter fight led by various civil rights organizations and a few governmental agencies to extend union representation to all workers, white and of color, men and women, are unions today helping to close racial and ethnic wage gaps. The study concluded that “a significant transformation now seems to be happening.” (epi.org, March 2)