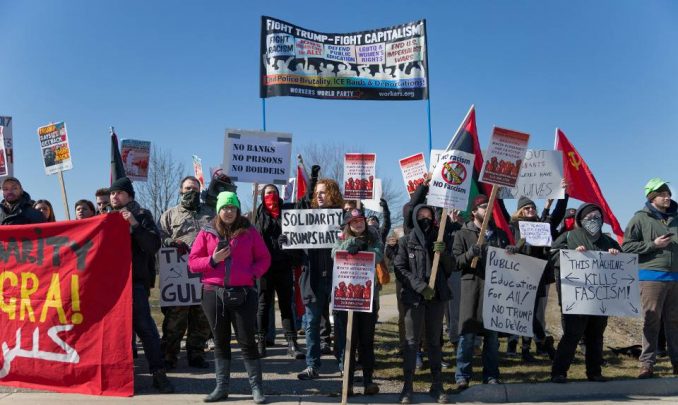 Sterling Heights, Mich. – A militant demonstration organized by the Michigan Peoples Defense Network countered a Trump rally here on March 4. The anti-Trump demonstration was especially significant because Sterling Heights is located in Macomb County, a predominantly white working-class area where Trump decisively won the vote in the presidential election.

Sterling Heights has also been a place of struggle against racist elements attempting to shut down the building of a Muslim mosque in the city. The MPDN rally took place despite numerous threats against the organizers.

Chanting “No Trump! No KKK! No fascist USA!” “No hate! No fear! Immigrants are welcome here!” and “From Palestine to Mexico, tear down the walls!” a hundred demonstrators lined the sidewalk as Trump supporters entered “Freedom Hill,” their rally site. When some of the right-wingers attempted to attack the MPDN demonstration, activists held strong and pushed them back.

The pro-Trump rally was poorly attended, with only several hundred people, well below right-wing organizer estimates, and seemingly characteristic of other pro-Trump actions that day across the U.S.

At a rally after the MPDN demonstration, speakers emphasized they will not abandon any section of the working class to Trump and his billionaire cabinet, who are using racism, sexism and anti-LGBTQ bigotry to sow division among workers. The billionaires are pushing an agenda of tax breaks for the rich, abolition of the minimum wage and destruction of public education and health care. Ten percent of Macomb County residents stand to lose their health care if the Affordable Care Act is eliminated.

A young woman summed up the significance of the spirited counterprotest: “I am a Muslim immigrant. I came to Sterling Heights as a refugee queer woman. I am from Sterling Heights, but Sterling Heights did not represent me [in the election]. It voted against my dignity as a human being. To have everyone come out in such numbers … means a lot.”