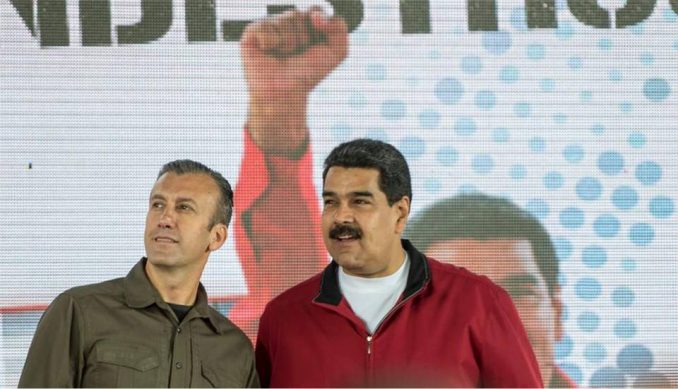 The Bolivarian government of Venezuela is fighting back against the outrageous allegations and sanctions levied against Vice President Tareck El Aissami by the Trump administration on Feb. 13. The U.S. has accused him of being an international drug kingpin with millions of dollars in assets in the United States to be frozen. The opposite is true. President Nicolás Maduro on Feb. 14 went on national television in Venezuela demanding a retraction and formal apology from the U.S. Workers World freely shares here a public letter from Vice President El Aissami, published as a full-page ad in the New York Times on Feb. 22. The letter has been lightly edited by WW.

I write to you as a Venezuelan citizen and in my capacity as Executive Vice President of the Bolivarian Republic of Venezuela, … [in] reply to the issuance of sanctions against me by the U.S. Treasury Department’s Office of Foreign Assets Control (OFAC) last Tuesday, Feb. 13.

First, in your capacity as OFAC Authority you have been deceived by political sectors, lobbyists and stakeholders in the U.S. whose essential interest is to prevent the United States and Venezuela from restoring their political and diplomatic relations on the basis of mutual recognition and respect.

These stakeholders not only lack any evidence to demonstrate the extremely serious accusations against me, but they also have built a false-positive case in order to criminalize — through me — the government of the Bolivarian Republic of Venezuela, a country that is decidedly waging a war on the transnational drug trafficking business.

You should be aware that when I headed the public security corps of my country, in 2008-2012, our fight against drug cartels achieved the greatest progress in our history and in the western hemisphere, both in terms of the transnational drug trafficking business and their logistics structures.

During those years, the Venezuelan anti-drug enforcement authorities under my leadership captured, arrested and brought 102 heads of criminal drug trafficking organizations not only to Venezuelan justice but also to the justice of other countries where they were wanted.

From these 102 captured drug lords, 21 were promptly deported to the USA and 36 to Colombia, in accordance with the requests made by the authorities of each country and in compliance with the international agreements on the fight against organized crime, facts formally acknowledged by the U.S. and Colombian authorities.

Between 2005 and 2013, the seizure of drugs by the Venezuelan authorities averaged 56.61 tons per year, which is a far higher figure than the 34.94 tons per year averaged in the six preceding years, when the U.S. Drug Enforcement Agency was operating in Venezuela.

This figure shows by itself the lack of commitment of the DEA to fighting drug trafficking, and upholds the very well-documented assertion of the connections between that U.S. agency with the criminal drug organizations. In addition, Venezuela has always been recognized by the United Nations as a drug-free territory.

The extraordinary progress made by the Bolivarian Republic of Venezuela in the fight against drug trafficking — which I directed in my capacity as head of the public security corps — was acknowledged by international organizations, such as the United Nations Organization, and appears in the archives of the judicial bodies of the United States and Colombia, which countries also acknowledged the efforts that I headed against organized crime, which is unprecedented in our hemisphere.

Thanks to this modern legal instrument, Venezuela has destroyed, disabled or brought down over 100 aircraft belonging to the drug transport structure from Colombia and neighboring countries illegally flying over our territory.

Venezuela is waging an all-out war against drugs because it is a cross-border crime against humanity, and because such fight is a shared responsibility, as members of the international community.

Venezuela also fights drug cartels because our country and our people are victims of drug trafficking, particularly of the powerful Colombian illegal drug industry, the main supplier of the drug that floods the streets of the United States and Europe.

You would need to investigate further before endorsing such false and reckless accusation, crafted by bureaucrats and anti-Venezuelan stakeholders, which sets a dangerous precedent in the relation between sovereign nations.

The decision of 120 countries to reject these illegal measures adopted against Venezuela clearly demonstrates that this unilateral decision is a serious error of the U.S. administration, contrary to international law.

But beyond any political and geopolitical considerations, OFAC’s decision constitutes a serious violation against my human rights and seriously damages my dignity and honor. I have led my personal, professional and political life in my country, which I love deeply and to which I devote my life through a political project whose supreme objective is the happiness of our people, equality and social justice.

I have no assets or accounts in the United States or in any country of the world, and it is both absurd and pathetic that [a U.S.] administrative body — without presenting any evidence — adopts a measure to freeze goods and assets that I do not own at all.

The intended sanctions, approved by the head of OFAC, on the very day of his confirmation as Secretary of the Department of the Treasury, are illegal and in violation of International Law. Acting ex officio and without any evidence, as an extraterritorial police and without having powers to do so, is a format that violates the entire international human rights system, whose doctrine prevails in the world.

Paradoxically, whereas a governmental office dares to accuse, without evidence, people anywhere in the world — as recognized by the international organizations and academic research —  the “war on drugs” has failed all over the planet and especially in the U.S.

Today more drugs are brought into the United States than ever before, while a corrupt and legal powerful financial structure legitimizes and recycles dirty money from this international illegal activity, which deprives thousands of [U.S.] young people of their life and future.

The United States owes the world and their own people a reflection on the resounding failure of their fight against drugs. In the country where the

so-called “war on drugs” has been implemented as a unilateral strategy, the drug cartels today are stronger than ever; the production of illegal drugs has multiplied, bringing about economic losses and, more importantly, more loss of human lives.

How many chiefs of criminal drug organizations have been captured by the U.S in its territory? How many banks and tax havens have been closed down by the U.S. for supporting this gigantic illegal business and crime against humanity?

Even though the U.S. claims an extraterritorial power to certify, accuse and punish people and countries, it has failed to ratify any of the international treaties concerning this sensitive issue.

The United States must rethink this matter and rectify, particularly as to the application of policies and measures that are clearly against international laws and are aggressive and unfair in the realm of human rights; in addition, they are dangerous for international relations and unconstitutional in light of the U.S Constitution itself.

The U.S. should [recognize] that only through joint, transparent and honest cooperation between the States, can the fruits the international community and world citizens be harvested.

I am a Venezuelan citizen, I am a Bolivarian and a Latin American. I am fully convinced of the ideals of independence, justice and freedom for which our liberators gave their lives and I am willing to submit to the same fate in the defense of our sovereignty, our Homeland and our People.