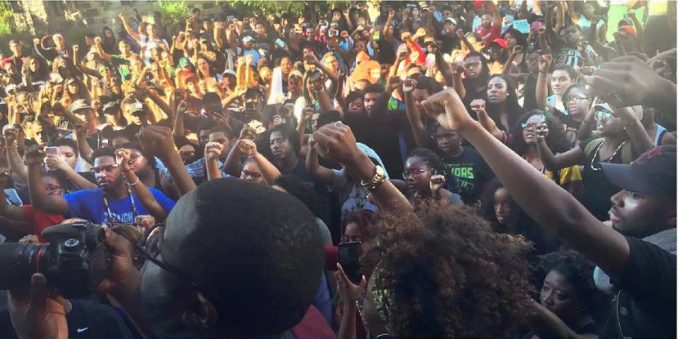 This outcome is a victory for the determined, anti-racist students who kept up the outcry against the EMU administration. It was due to protesters’ fearlessness and persistence that the charges were dropped. The EMU Black Student Union and the NAACP, among other groups, organized the protests.

The 16 students were sanctioned after occupying the Student Center past closing time in November. They heroically defied this “colorblind” administration. EMU officials originally called for the students’ expulsion, but later reduced the punishment to deferred suspensions. Officials then sent out letters of reprimand to the 16 students, which would have stayed on their academic records.

Throughout the negotiations and student hearings, even in the face of massive criticism, the administration maintained that the rules must be “evenly applied” and that they must maintain the “integrity” of the “investigative process.” This prompted a student to succinctly reply, “Fuck the process!”

The students condemned the white university administration’s racist hypocrisy in pursuing sanctions against Black students protesting racist intimidation. While EMU diligently prosecuted the case against the protesters, they didn’t put as much energy into finding those who wrote the threatening, racist messages on university buildings — including on the door of a historically Black fraternity. Students carried a huge sign at the protests stating: “Eastern Michigan University’s president is a racist.”

The irony was not lost on protest organizers when the university held its Dr. Martin Luther King Day symposium, entitled, “Courageous Conversations: Writings on the Walls,” at the same time as it pursued punishment against Black students protesting racist graffiti.

There is a long tradition of anti-racist student organizing in the Washtenaw County area. Many organizers at recent events in the city of Ypsilanti identified themselves with the deep abolitionist history in that city. Frederick Douglass spoke there during three separate visits 150 years ago, and the largest number of African-American Civil War veterans in the country are interred there.

Mobilization at the University of Michigan around racial justice and sanctuary university status has likewise recently reached critical mass, especially through the efforts of Students4Justice, a students of color-led social justice group. The organization staged a walkout last year on Nov. 16 that attracted well over 1,000 students, faculty and community members.

The protests follow years of organizing in the Washtenaw area by groups such as the Ann Arbor Alliance for Black Lives and Radical Washtenaw, who have fought to win justice for Aura Rain Rosser, a Black woman killed by Ann Arbor police officer David Reid on Nov. 9, 2014.

Ann Arbor, dubbed “Klan Arbor” by some organizers, has shown its commitment to white supremacy and racism in its adamant refusal to significantly change its policing policies and hold accountable any officers or officials for Rosser’s death. Armed and in uniform, Reid still roams Ann Arbor, a known threat to all Black and Brown lives.

The victory at EMU vindicates the 16 courageous, determined students and those who have stood in solidarity with them.