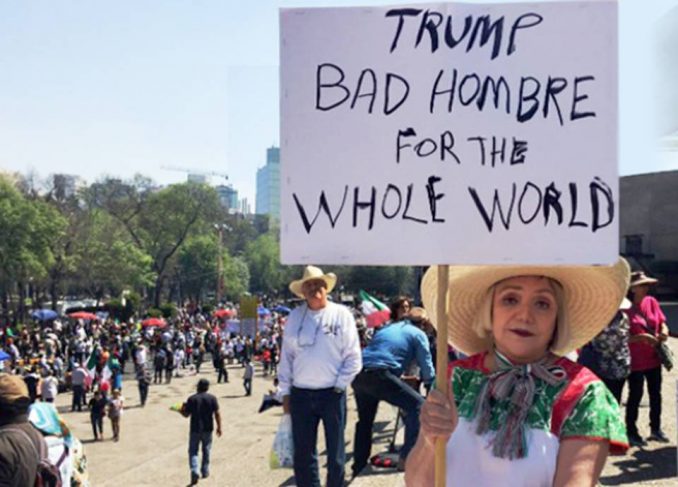 There were nation-wide protests in México against Trump on Feb. 12.

Feb. 13 — Donald Trump has suffered a series of setbacks in his foreign policy promises while escalating attacks on the workers and oppressed at home.

Trump campaigned against China all throughout his candidacy. He made aggressive charges that China was “raping our country” through currency manipulation and unfair trade. Trump threatened trade retaliation and questioned the One China policy by taking a phone call from the president of Taiwan, which is rightfully part of China.

Reality set in last week. After a phone call with the president of the People’s Republic of China, Xi Jinping, who represents 1.3 billion people and the second-largest economy in the world, Trump announced he would follow the One China policy and not recognize Taiwan.

During his campaign, he curried favor with the most right-wing, pro-Israeli forces, like billionaire casino owner Sheldon Adelson, by vowing to move the U.S. Embassy from Tel Aviv to Jerusalem. No other imperialist country has an embassy in Jerusalem.

But when he sought Saudi and Egyptian help in the Middle East, he was told to drop the idea of moving the embassy to Jerusalem. He has not mentioned it since.

Trump vowed to restore torture as official policy and to reopen secret torture sites that the Bush administration had established in other countries but later outlawed. In the face of potential antagonism from the hundreds of millions of people in the Middle East, Trump has had to quietly back away from both these pledges.

Of course, his ban of Muslim immigrants and refugees has blown up in his face. It provoked widespread demonstrations throughout the U.S. and other continents, which are still going on.

While the capitalist media were focused on the courts and the travel ban, Trump introduced sweeping new rules for deportation. President Barack Obama was rightfully known as “deporter in chief” for the millions of deportations under his regime. In his last years, however, Obama relaxed the rules governing deportations to exclude all but the most serious crimes.

Trump issued an executive order on Jan. 25 changing the rules. His new rules call for deporting anyone with a chargeable offense, whether or not they have been convicted of a crime.

Chargeable offenses include crossing the border without documents, using a false Social Security card (without which no one can work) and any minor misdemeanor. The new rules give local immigration authorities complete discretion in deportation proceedings.

These rules make all 11 million undocumented workers in the U.S. subject to arrest and deportation at any time.

Breaking up a family

Trump’s message was clear in the high-profile deportation of Guadalupe Garcia de Rayos, 35, a mother of two who came to the U.S. in the 1990s when she was 14. Garcia was arrested in an ICE workplace raid in 2008, but the agency worked out an arrangement for her to remain as long as she reported to ICE periodically. She had reported eight times since then.

In 2013 an order to deport was instituted, but Garcia de Rayos was allowed to remain. But when Trump changed the rules to allow priority deportation for any illegality, she was seized on Feb. 8 when she reported to ICE and deported within 24 hours.

Protesters were arrested at demonstrations to stop her deportation.

As to the raids over the last week, Trump has announced he was “carrying out my campaign promise.” In other words, he is stoking fear in the immigrant community and stoking hatred in his reactionary racist followers.

Billionaires on a rampage

One of the reasons political machines under capitalist democracy have been hesitant to put billionaires personally in charge of the White House, as opposed to allowing them into the cabinet and other high positions, is the fear that their greed will lead them to wreck the economy and endanger the system altogether.

But now there is a billionaire boss, who came from outside the political establishment, who has moved directly into the White House, and has complete domination of the most powerful governmental executive position in the world.

The Democratic Party administration of Bill Clinton laid the basis for the great financial crash of 2008. Financial policy was dominated by Robert Rubin, Clinton’s secretary of the Treasury and former head of Goldman Sachs, along with Larry Summers and Alan Greenspan, all voices of Wall Street.

This group cast aside regulations that had put a lid on bank speculation. They overturned the Glass-Steagall Act, passed after the Great Depression. The Clinton group fought against regulating a major new speculative instrument called financial derivatives. That unleashed Wall Street and the banks to do as they pleased.

It took less than 10 years for the massive speculation in mortgages and derivatives to build up a bubble. The bubble burst and the Great Recession of 2008 crashed down on the U.S. and the globe. It made the cyclical capitalist boom-and-bust crisis immeasurably worse.

Now the Trump administration is busily crafting new ways of removing all restraints on the banks and financiers.

In the wake of the 2008 crash, the Dodd-Frank Wall Street Reform and Consumer Protection Act was passed to put some restraints on the banks going forward. Trump boasted to a host of bankers that he was going to get advice from Jamie Dimon of JPMorgan Chase on how to take apart Dodd-Frank, among other regulations.

The working class must get ready for a reenactment of speculative frenzy among the bankers and the bosses if Trump pushes through his financial “reform,” which includes his plan to lower corporate taxes and do away with regulations on corporate crimes against the workers and against the environment.

The right wing mobilized anti-abortion forces nationally on Feb. 11 to demonstrate against Planned Parenthood. Trump has promised to defund the organization, which provides not only abortions but basic women’s health care throughout the country.

A massive pushback by tens of thousands in the movement against Trump’s Muslim travel ban panicked the ruling class and the courts. Trump suffered a setback as Ninth Circuit Court judges unanimously upheld a Seattle district court ruling that temporarily stopped the travel ban. There is no evidence that Trump has given up the ban, but he has had to say that he might have to redraft it to make it more acceptable in court. But the mass opposition is already in motion.

As demonstrations against the deportations broke out throughout the U.S., a massive demonstration in Mexico City was part of a Mexico-wide mobilization against the wall and the persecution of  immigrants. Meanwhile, in the U.S., workers have been demonstrating against anti-union, “right to work” moves in Wisconsin and Michigan state legislatures.

The temporary victory in court against the travel ban and  deportations is the result of both the demonstrations down below and the harm that the ban does to the tech industry, the universities, hospitals, agribusiness and other capitalist institutions. It is a case in which the movement on behalf of the oppressed benefited from a combination of their own struggle and a split in the ruling class.

Courts no friend of workers and oppressed

The court ruling on the travel ban has been accompanied by mountains of capitalist praise for judicial checks on the executive, the great “separation of powers,” “checks and balances” and so on.

The Seattle and the Ninth Circuit courts issued liberal rulings. Trump will undoubtedly try again, since the judiciary, and especially the federal judiciary, is the most reactionary branch of the three branches of the capitalist state. Federal judges are appointed for life. They cannot be removed by any ordinary means. Therefore, no one should be inveigled into relying on the courts.

Of course, the workers and oppressed are always in favor of rulings they can take advantage of. For example, the Supreme Court ruling in Brown v. the Board of Education overturned the racist doctrine of “separate but equal,” which had been the legal basis for Jim Crow laws enforcing segregation in the South.

But that 1954 ruling was in anticipation of the coming massive Civil Rights Movement and the general Black Liberation struggle rising in the South. It was an anticipatory ruling.

Similarly, the 1973 Roe v. Wade decision that legalized abortion was a ruling in reaction to a mass movement of women. It had nothing to do with any progressive leaning of the court. In fact, it was a Nixon court with a majority of Republican-appointed judges who were under mass pressure.

By contrast, the history of the Supreme Court is overwhelmingly reactionary. An 1806 Supreme Court ruling that a union organized by shoemakers was a “criminal conspiracy” was applied to other unions for much of the 19th century.

The Dred Scott decision of 1858 declared that runaway fugitive enslaved people were still property of a master and had to be returned. The Plessy v. Ferguson ruling of 1896 upheld the pernicious “separate but equal” doctrine of racial segregation in public facilities.

This reactionary history extends all the way to this century’s Citizens United decision, which unleashed billions of dollars to further corrupt the voting system and gut the Voting Rights Act, disenfranchising millions of African American and Latinx people.

There are no checks and balances on the extreme capitalist exploitation and accumulation of wealth in the U.S. that has left the top 0.1 percent of the population with more wealth than the bottom 90 percent.

As a rule, these atrocities are either ignored or blessed by the courts.

The only true check on the aggression of the ruling class against the workers and the oppressed is the mass struggle.