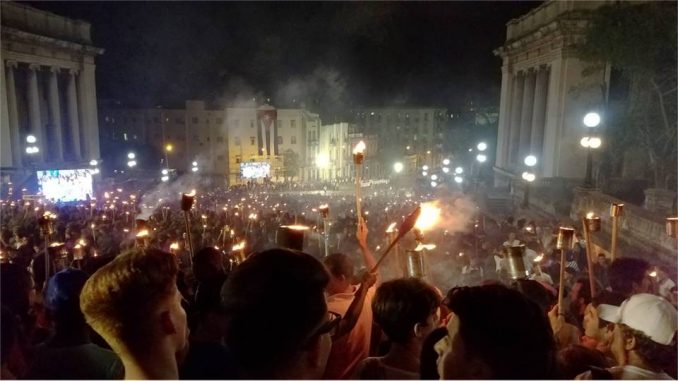 On Jan. 1, 1959, the Cuban people, with the leadership of Fidel Castro, Che Guevara and others, overthrew the U.S.-backed regime of Fulgencio Batista and established a socialist state 90 miles off the coast of Florida.

The accomplishments of the Cuban Revolution are many, including free education and health care for all Cubans, a long record of support for anti-imperialist struggles around the world, and enormous relief efforts in response to humanitarian crises, such as the 2014 West African Ebola outbreak.

The Revolution has also overcome enormous obstacles, including the U.S.-orchestrated invasion at the Bay of Pigs in 1961, the U.S. blockade (in place since 1960), numerous terrorist attacks by Cuban exile militias based in Florida and the collapse of the Soviet Union in 1991.

In spite of this extraordinary endurance, U.S. journalists and politicians constantly declare impending collapse of the Revolution. After 58 years of incorrect predictions, they’re still at it. These voices have only grown louder since the 2011 changes in Cuban economic policy, the 2014 thaw in U.S.-Cuba relations and the death of Fidel Castro last year.

So are the naysayers right this time? How strong is the Cuban Revolution? Will it endure?

The people are the revolution

Last month, this writer had the opportunity to visit Cuba and witness the indomitable strength of the Revolution firsthand. On Jan. 27, thousands of students marched through the streets of Havana in the annual “March of the Torches” to commemorate Jose Martí, the Cuban national hero. The march was first organized at the University of Havana in 1953 to celebrate the 100th anniversary of Martí’s birth. This year’s march was the first since the passing of Fidel Castro and was dedicated to him.

When asked about the recent developments in Cuba, Alejandro, an electrical engineering student at the José Antonio Echeverría Higher Polytechnic Institute who attended the march, put it this way:

“A lot of people think that when Fidel died the Revolution was going to fall apart, but that is not going to happen. The young Cubans are going to strengthen the Revolution and carry it forward. A big change is the change in U.S.-Cuba relations, which should benefit both countries … but that doesn’t mean we will give up any of the principles we have struggled for, or that we will let ourselves be defeated.”

Richael, who is studying biochemistry and Chinese at the University of Havana, made it clear what those principles are: “Fidel took [Martí’s] ideas and values, the ideas of anti-imperialism, patriotism and Latin-Americanism and put them into practice… . Some things are never going to change: free health care and education.”

Given Fidel’s enormous significance to the Cuban people, one might expect to find his face painted on every surface since his passing. In fact, nothing could be further from the truth: Fidel’s image is almost nowhere to be seen.

Raúl Castro announced at a tribute to Fidel before his burial, “Faithful to Martí’s philosophy that ‘all the glory in the world fits into a kernel of corn,’ the leader of the Revolution rejected any manifestation of a cult of personality, and remained true to this position until the last hours of his life, insisting that, after his death, his name and likeness never be used to designate institutions, plazas, parks, avenues, streets or other public spaces, nor monuments, busts, statues and other such tributes be erected.” (en.granma.cu)

Alejandro explained this decision, “Fidel wanted to make it clear that he wasn’t the Revolution, that the people were the Revolution. Don’t think the Revolution is over because Fidel has died. We are strong and will continue with his ideas.”