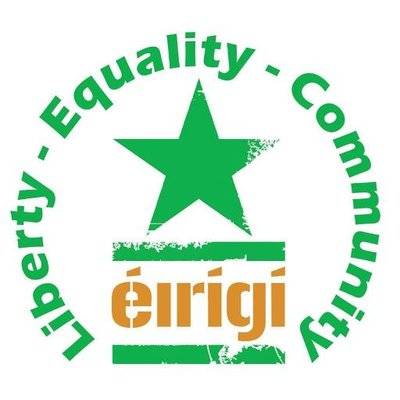 The following interview with Ian Ó Dálaigh of Ireland was conducted by Zach Gevelinger. Ó Dálaigh is the Galway-area representative for Éirígí. He is also involved with the Galway Palestine Solidarity Campaign and the Galway Housing Action Group. Éirígí is a socialist republican party. In Ireland, “republicanism” historically means a political ideology that seeks a cultural, political and economic divorce from England and the United Kingdom. Irish republicanism was founded on the basis of a secular nonsectarian approach to religion, as well as liberty and equality for the people of no property.

Gevelinger: Could you briefly explain the origins of your party, meaning and platform?

Ó Dálaigh: Éirígí was founded in April 2006 as a campaigns group by socialist republicans based in Dublin. We then went on to constitute as a political party at our first Ard Fheis [annual party conference] in 2007. The root cause of our formation was the simple fact that Ireland remained partitioned and the working class remained exploited.

Éirígí is an Irish Gaelic word, translated as “arise” or “rise up,” in reference to the famous quote from one of James Larkin’s speeches: “The great only appear great because we are on our knees: Let us rise.”

As for our platform, we place ourselves firmly in the long socialist republican tradition that exists in Ireland. Our platform is premised on the fact that, as I’ve already said, Ireland is partitioned and its working class is exploited. This has been the case for a long, long time — and it may take a long time to change it. Right now, the need to popularize a genuine socialist republican alternative to capitalism and imperialism is of paramount importance.

Gevelinger: How does Éirígí differ from other republican and/or socialist groups?

Ó Dálaigh: The decision to form Éirígí was not one that was taken lightly. It was felt that there was space for a new socialist republican organization. The growth of the party since then, from seven Dublin-based members to having bases across Ireland, confirms that this analysis was the correct one. While we are constituted as a political party, we differ from most other parties in that we do not see electoralism as a means towards creating a socialist republic. While we do feel that tactical engagement in elections can be of use in certain circumstances, what we are about is mobilizing people against capitalism and imperialism. We also believe the building of a new progressive social movement to be an essential step on the road to transforming Ireland’s socioeconomic system. Such a movement will need to encompass trade unions, political parties, community groups, campaign groups, residents associations and nonaligned individuals.

Gevelinger: What current political work is Éirígí engaged in?

Ó Dálaigh: We began 2016 by taking part in the Save Moore Street campaign, which involved the occupation of buildings that were the last headquarters of the rebel leaders during the 1916 Rising. The campaign ended in victory, as a court ruled that the buildings and streets surrounding 16 Moore Street are of huge historical significance and should be protected.

Our activists were heavily involved in the anti-water tax campaign, which has recently come to a halt, and ended with success — for now at least, as the issue has been put on the long finger [i.e., postponed] by the free state government.

More recently, November saw the launch of our Public Housing for All campaign. This is currently our main campaign, and will likely remain so for the foreseeable future, as the housing crisis across Ireland is deepening. Some of our members were involved in the recent occupation of Apollo House in Dublin, a direct action which brought huge focus on the housing crisis and ensured that 76 people previously sleeping on our streets have been transitioned into stable beds. So you could say that we began 2016 fighting for heritage, and ended it by fighting for our future.

Our Ciorcal [branch] in County Wicklow recently rolled out the first of what we hope will be many community programs: providing low-cost fuel to their community through the formation of a local co-op. These are the kinds of actions that we feel simultaneously highlight the failings of capitalism, the importance of people power, and the need for community empowerment in striving towards a better world.

Gevelinger: How is the Easter Rising still relevant 100 years on?

Ó Dálaigh: Simply put, it is still relevant because its aims and objectives have not yet been achieved. An Ireland that “cherishes all of the children of the nation” remains an aspiration, not a concrete reality. The challenges facing republicans today may be different, but the objective remains the same. When you look at the main driving forces behind the Rising — the militant trade unionism of the Irish Citizen Army, the desire for national liberation of the IRB [Irish Republican Brotherhood] and Irish Volunteers — it is clear that the root causes of conflict in Ireland have still not been fully addressed. We believe, as James Connolly did, that the class question and national question are intrinsically linked and any attempt to separate them will lead us down a blind alley instead of advancing the aims of socialist republicanism. The failings of capitalism in Ireland are there for all to see — the housing crisis, the deep inequality, our reliance on foreign direct investment — are just a few examples. In addition, imperialism is still rife in Ireland — the British occupation of the six counties, U.S. military involvement in Shannon airport, and European Union membership attest to this. So, if we accept the premise that the Easter Rising was born out of a desire to overthrow an imperialist power and establish a republic that would put the needs of the many over the greed of the few, then any observer of modern Ireland will see that the Rising is still very much relevant.

Ó Dálaigh: I’d like to thank you for giving Éirígí the opportunity to explain its ideas to people in the U.S.  Communication and solidarity between peoples involved in struggle is essential in the fight for a better world, and long may it continue.