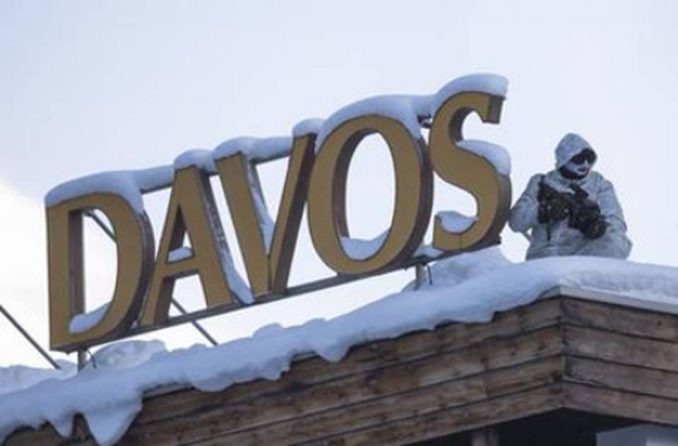 Police on guard next to the Congress Center ahead of the 47th annual meeting of the World Economic Forum in Davos, Switzerland.

While 3,000 of the world’s wealthiest people wined and dined on champagne and caviar in Davos, Switzerland, Jan. 17-20, 9 percent of the world’s people went to bed hungry.

These millionaires, economists and government leaders met at the World Economic Forum, as they do annually, in pursuit of international trade agreements and other measures which will provide wider markets and lead to higher profits for their countries’ companies. This year they’re worried. A major topic of discussion was the future of corporate globalization, which is endangered, as fury grows worldwide over rising income inequality. That and social polarization were viewed as risks to the world capitalist economy which could stymie globalization.

The masses of people know that the super rich are getting richer and that they — the workers and oppressed people whose labor creates the wealth — are getting poorer. The WEF said that median income had fallen 2.4 percent from 2008 to 2013 in 26 industrialized countries. In Europe and the United States, some of that anger is terribly misdirected at immigrants and other oppressed people — who are just trying to survive — instead of at the obscenely wealthy capitalist class.

In fact, the “global elite” are so concerned at growing international anger at financial inequities that an article included in the Forum’s agenda was entitled “Davos leaders agree: Share the wealth or face the consequences.” Christine Lagarde, head of the imperialist-run International Monetary Fund, asked, “When you have a real crisis, what kind of measures do we take to reduce inequality?” She concluded, “It probably means more redistribution.” After her comment, the topic was dropped. (weforum.org/agenda) That is not a popular idea among billionaires.

Actually, a report prepared to coincide with the Davos conference by Oxfam, a British-based charity, asserted that eight men now own the same amount of wealth as the 3.6 billion people who form the poorest half of the earth’s population. Through evading taxes, driving down wages, fighting unionization, influencing elections and pressuring governments to gain pro-business policies, the super rich are amassing enormous wealth at an incredible rate — faster than ever.

Who are these eight billionaires? Together they are worth $426 billion, equal to the wealth of half the planet’s population, said the Jan. 15 Guardian newspaper. Three years ago, Workers World newspaper reported that 85 billionaires owned that percentage of wealth. But due to acquisitions, mergers, expansions and lucrative investments, wealth has become more concentrated in fewer hands. Monopolies develop and prosper as their competitors are pushed aside, often shrinking their businesses or closing — with their workforce seeing hours or jobs disappear. Companies must expand or die.

Take online bookseller Amazon, owned by Jeff Bezos, purchaser of the Washington Post. Now the mail-order conglomerate sells everything, even cookies from Australia. His company’s practices have forced independent bookstores to close, and pose a threat to other brick-and-mortar stores.

The richest 1% has owned more wealth than the rest of the planet’s population since 2015, says Oxfam. They benefitted from the “jobless” recovery after the global economic crisis, garnering big profits, while U.S. and other workers lost ground. Despite reactionary economists’ pronouncements, no profits “trickled down” to the workers and communities here or abroad.

Examining the impact of corporate globalization shows that the vast majority of the world’s poorest 50 percent work very hard to get by. One in 10 people (720 million), mostly women, struggle to survive on less than $2 a day. The increasing wealth concentrated in the hands of a few is not being shared with poorer countries or their inhabitants. There has been no “recovery” for them.

Can capitalism be reformed?

Panels in Davos discussed whether capitalism could be reformed. If so, what are the best ways, and how could globalization be improved to help the masses? Some crucial questions were not even addressed: Could workers be paid more? Can their bargaining power be strengthened? Can the super rich redistribute their wealth? Nor were education costs or access to health care taken up.

Nobel-Prize-winning economist Joseph Stiglitz explained that allowing more bargaining rights to workers is “where Davos man is going to get stuck. … Globalization has reduced the bargaining power of workers, and corporations have taken advantage of it.” In Davos, he did not hear discussion of how to change globalization to address inequality, with measures like transferring wealth and power to workers, more union bargaining rights and labor protections. (New York Times, Jan. 18)

Will corporate moguls act on humanitarian appeals to share their wealth, to be generous to workers at home or abroad? No.

Human labor creates the capitalists’ wealth; workers are paid a mere fraction of the value they create. That is the basis of all profits; it is intrinsic to the system. Corporations search the globe looking for the cheapest labor. They suppress labor struggles for higher wages, sometimes brutally.

Capitalists are not interested in raising wages or sharing or redistributing their wealth. Not only are they greedy, but they are spurred on to expand their businesses and buy up or merge with other companies — or they will be pushed out by bigger corporations, by monopolies.

To live under a kinder, fairer economic system requires that we — workers and oppressed people, immigrants, students and our allies — fight to get rid of heinous, inequitable and exploitative capitalism, based on private ownership of industry and the profit motive. We must establish socialism, with collective ownership, equal sharing of resources and true humanitarianism — and with equality, mutual respect and opportunities for all.