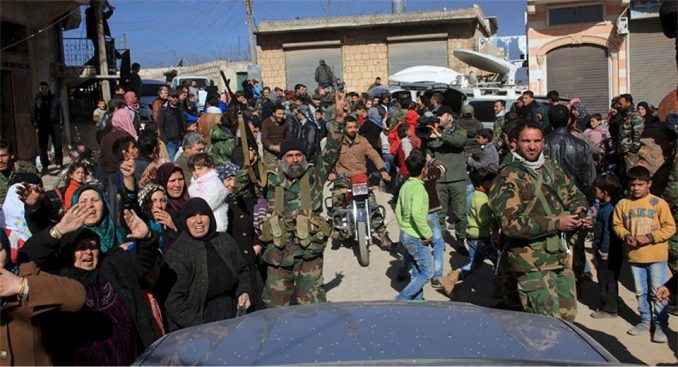 The Syrian military has successfully liberated the entire city of Aleppo, which, up until the current conflict broke out in 2012, was the largest city in Syria. For more than four years, much of Aleppo had been occupied by U.S.-supported “rebel” forces, including groups tied to al-Qaida, and many thousands of non-Syrian mercenaries.

The people in Aleppo are jubilant. Christians, who make up 10 percent of Syria’s population, were able to conduct a religious Christmas ceremony in Aleppo for the first time in five years.

Dr. Nabil Antaki, a physician who stayed and served his patients in western Aleppo through the war, told a reporter: “The situation in Aleppo is now much better than it was in the last four years. It is now almost liberated from the rebels-terrorists. The inhabitants of Aleppo have a feeling of safety, there has been no mortar shelling in the last few days as it was daily during the last four years. The inhabitants of East Aleppo are free now from the terrorists, who used them as human shields.” (tinyurl.com/jp3tt3r; Zenit, Dec. 26)

Many Aleppo residents have returned to inspect homes that were damaged or destroyed by the intense warfare. Some 400,000 people have been killed in the Syrian conflict. Another 4.8 million Syrians have been forced to flee the country, 6.1 million more are homeless in their own country, and a once-modern infrastructure has been largely destroyed. (worlddivision.org, Nov. 15)

On Dec. 28, a ceasefire brokered by Russia and Turkey was announced in Moscow. Negotiations for a political settlement to the war are scheduled for January in Kazakhstan’s capital city of Astana. Turkey had been a main conduit of the Pentagon and CIA’s billions of dollars of weapons and training to the “rebels,” that is, the reactionaries.

U.S. imperialism not part of negotiations

The agreement came just days after the shocking assassination of the Russian ambassador to Turkey, Andrey Karlov, by a Turkish police officer. Karlov had previously been the ambassador to the Democratic People’s Republic of Korea. If this was an attempt to torpedo Syrian peace negotiations, of which Karlov was a key participant, it backfired.

U.S. imperialism, ignoring the terrible suffering that this war has caused for the Syrian people, has tried to overturn the elected government of President Bashar al-Assad and install a regime tailored to serve Wall Street.

Now it finds itself closed out of the upcoming negotiations, which will include the Syrian government, Russia, Turkey, Iran and several opposition groups.  The Islamic State group and the al-Qaida affiliate in Syria are excluded. The United Nations Security Council has passed a Russian-authored resolution backing the ceasefire and negotiations. Although forced to go along with this, Washington is obviously enraged by this resolution, as it fails to demand that President Assad step down.

Pro-war Sen. Lindsey Graham wrote on Twitter, “I fear what is being hailed as a ceasefire in Syria will become a capitulation to Russia and Iran.” (bloomberg.com, Dec. 29)

Sara Flounders, co-director of the International Action Center, told Press TV in an interview on Dec. 31 that the very fact that a Syrian ceasefire agreement was reached without the participation of the U.S. is an extremely important development. She added that it shows Washington was the “biggest impediment” to peace all along.

U.S. imperialism, stymied for now, refuses to stop its efforts to get a grip over Syria and the whole Middle East. “It is not for certain that this is ending,” said Flounders. “I think the U.S. efforts to destabilize the entire region will very much continue. That is a real danger we need to be aware of.”