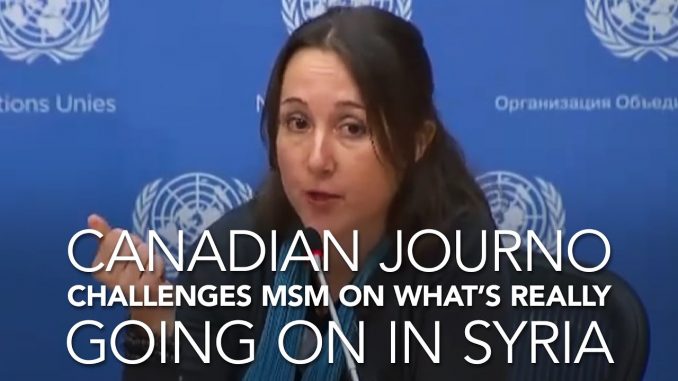 Before a packed house in Detroit on Dec. 12, Bartlett spoke of her experiences in Syria and the time she spent embedded with government officials and members of the Syrian Arab Army. This allowed her to see first hand the destruction caused by Western-backed proxies in Aleppo.

Countering a renewed corporate media blitz, Bartlett dispelled many of the “humanitarian concerns” peddled to people in the U.S. to encourage support for more imperialist intervention and destruction in Syria.

Bartlett also dispelled many of the Western lies about rebel groups such as the allegedly “neutral” Syrian Civil Defense,  known as the White Helmets. She also exposed the so-called “moderate rebels,” who have been used as a media prop to showcase the alleged brutality of the Syrian government in Aleppo.

Her discussion on the situation in Syria emphasized the disdain that civilians in cities like Aleppo have for the rebel groups, such as Jahbat Al-Nusra, an Al-Qaida affiliate which had essentially been holding them hostage for several years now.

Bartlett said many of the civilians in Aleppo felt hate for the rebels who had subjected them to this war they never asked for. The people told her the rebels have been hoarding aid, which the West said the population desperately needed, and selling it at vastly inflated prices.

Bartlett said many of the civilians in the areas of Aleppo liberated by the Syrian government hadn’t even heard of the White Helmets. In the West, however, the White Helmets have gained fame, despite their close ties to Al-Qaida and the time they spend training in Turkey — which was funded by the U.S. and the European Union.

Joe Mshahwar, a local Syrian-American activist, also spoke on conditions in Syria and the U.S. scorched-earth policy there. He addressed the hypocrisy of the West’s portrayal of Russia’s actions in Syria, given that Russia was invited to aid its Syrian ally by President Bashar al-Assad.

Mshahwar also talked about the “rebels,” armed and funded by the U.S., Turkey and the Gulf States. And he described U.S. leaders’ willingness to allow the Islamic State group to make key advances as long as they harmed Syria’s legitimate government.

Abayomi Azikiwe, editor of Pan-African News Wire, spoke on the important conflicts in Yemen and Libya and across the Horn of Africa. He showed the connections between these conflicts and the wars in Syria and Iraq and how they relate to the interests of U.S. imperialism.

Bartlett’s California speaking tour included three meetings in the Bay Area — in Santa Cruz, Oakland and San Francisco, Dec. 14-16. Each meeting was packed with people eager to hear an eyewitness view of the situation in Syria, untarnished by U.S. imperialism’s official line spoon fed to the mainstream media.

Bartlett strongly reiterated, “What you hear in the corporate media is the opposite of reality.” She explained that the “majority of people in Syria support their government and army, while outside jihadist forces, in alliance with domestic fundamentalists and a coalition of foreign governments led by the U.S., have imposed an inhumane reign of terror on the country.”

Bartlett gave very well-documented facts, including video, exposing U.S.-manufactured lies about the Syrian army and government. She exposed the corporate media’s lies and also  those of Amy Goodman of “Democracy Now.” Bartlett said Goodman continues to interview discredited voices and spread U.S. lies, with no investigation of her own, while actively refusing to interview voices countering the lies.

Larudee exposed the White Helmets, their creator and the funding that went into making the Netflix movie, which he said may be nominated for an Academy Award as a documentary. He said it should instead have been nominated in the “fiction” category.

Achi thanked the IAC “for being the only organization that responded to our initial calls for solidarity in Los Angeles.” He spoke about the solidarity between Christians and Muslims who see each other as sisters and brothers. Achi said the attempts by the U.S. for regime change would destroy that unity and punish the majority of Syrians, over 70 percent of whom support President Assad. He substantiated that by citing polls from the Guardian and other news sources.

The meeting was chaired by Rebecka Jackson, of the IAC and Workers World Party. Before the question-and-answer period, she explained that a “progressive stack” would ensure all voices are heard, especially those of women and oppressed peoples. Then she introduced IAC member Ramiro Fúnez who emceed the informative and lively Q&A.

Terri Kay and John Parker contributed to this article.