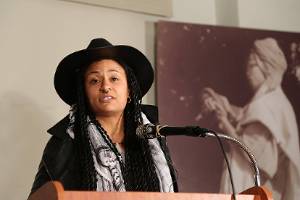 The article below is from a speech given at the Nov. 11-13, 2016 Workers World Party National Conference at the Shabazz Center in Washington Heights, N.Y.

Artists who I never thought would make the jump to direct activism are filling the streets, getting arrested and laying on the line to stop Trump. This shows how deplorable and detestable this man is. It also makes this the perfect time to recruit artists and encourage them to make revolutionary art.

What art is NOT is entertainment. An entertainer distracts. An artist’s job is to challenge. To make you uncomfortable, to make you question. For those who say art is not political, they don’t know shit about art. Art was always, and still is, a space to critique the ruling class.

Cesar Cruz said the role of art is to disturb the comforted and comfort the disturbed. But now it goes deeper. It is time to instigate the disturbed, to give them strength and focus in their purpose, to connect and lead in the movement against capitalism and imperialism.

Art is a weapon. You can use it to protect yourself from the ugliness of the world and fight against those who mean to squash you. When I was in Palestine, I worked with the youth of Juliano Khamis’s Freedom Theater and saw art save lives and give life to generations of people under the terror of Israel. Art was so dangerous there that they murdered Khamis. There is a reason art programs are the first thing to be defunded in schools.

As artists, our job is to show people the grim, deadly reality that we could face. As artists, it is our job to break down socialism into something visceral and ­accessible.

Che knew, as he said his dying words, “Shoot, coward, you are only going to kill a man.” Che knew that revolutionary ideas, like art, are the living incarnation of a knowledge much bigger than the artist or the person.

Art teaches you how to think and it gives voice to the voiceless. [Through art] you can discover the terms with which you are connected to other lives. This is a very great liberation for the suffering, struggling person who always thinks they are alone.

The reality is that everyone deserves life and empathy and space to be their truest selves: That is art and that is communism.

I was recently asked a very important question, which made me think deeply: “As a Black woman, why Workers World Party?”

I grew up in a house of neutral political and religious identity that encouraged expansive free thought. I was allowed to read and study whatever I chose. By seven years old, I was a vegetarian and an atheist. I spouted equality and revolution, so my grandmother always jokingly called me a communist.

Still too young to understand the depth or history of communism, I firmly maintained I was an anarchist and remained so most of my life. I believed in anarchy because I always felt absolutely alone. I’d never met anyone who believed what I did or felt what I did about the world. I was certain they had all been assassinated, and I was resigned to T-shirts with inspirational quotes. I never trusted anyone politically, and I never joined in anything overtly political.

Finally, I was beat by the [Los Angeles Police Department] in 2014 — a tragic event, I’m sure, but an event that brought me [to Workers World], to a group of people who embodied all the things I had felt all of my life. And with them everything made sense.

Communism as a practice was the means to enact the principles I valued from anarchy. I could see communism as a framework for freedom, for building a world in which the individual is protected from oppression by a united whole. Communism is a vehicle to defend lives of color and defeat imperialism.

It is people literally fighting for your life with their lives. Who saw your inherent worth, as a woman, as a Black woman.

Why Workers World? Because at my first [WWP] conference I saw a Black woman being announced as a presidential candidate. And in that woman I saw myself and my value.

Why Workers World? Because I see revolutionaries who have fought for decades and still go weeks without real sleep to keep the movement going.

Why Workers World? Because in a world of uncertainty, I know this is the group that will ride or die. If some shit goes down, a Black life stolen by police, Native lives attacked at Standing Rock, oppressed lives being snatched by imperialism anywhere on this globe, Workers World is pissed, and they are about to take it to the streets.