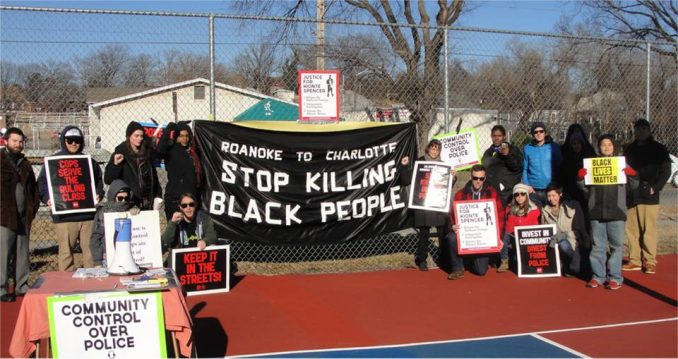 Dozens of community members from numerous cities across Virginia joined in solidarity here on Dec. 10 for a People’s Rally Against Police Violence. The Justice For Kionte Spencer Coalition, named after an 18-year-old Black youth murdered by Roanoke County cops in February, sponsored the rally. (facebook.com/JusticeforKionte)

Multinational supporters of all ages traveled to the rally from Lexington, Harrisonburg, Charlottesville, Salem, Blacksburg and Richmond, as well as Baltimore. Students from local Hollins University and distant Michigan State participated.

After Spencer was killed, the Roanoke County Police Department “investigated” itself and claimed its officers did nothing wrong. A Virginia Commonwealth’s Attorney rubber-stamped the investigation. Then the U.S. Attorney’s office refused to recommend any federal charges against the cops who killed Spencer. His family is currently looking into civil litigation.

To date, neither the dashcam video nor names of the police who did the killing have been released publicly. This despite repeated demands by the Justice For Kionte Coalition, the Roanoke and Virginia NAACP, and many individuals and organizations in Virginia and beyond.

Since Spencer was killed, there have been protests, educationals and other events to demand justice and support his family. Awareness of the case has grown at the local and regional levels. Spencer’s brother, Carl Spencer, raised the case at the Fight For $15 August 2016 national conference in Richmond and at the Workers World Party November 2016 national conference in New York City.

On Dec. 10, speakers from a range of organizations, from Fight For $15 Roanoke to the Community Anti-Racism Initiative (CARE) from Lexington, spoke out in front of banners reading “Justice For Kionte” and “Roanoke to Charlotte: Stop Killing Black People.”

During the open mic session, speakers exposed violence inflicted on poor and working people in Virginia and elsewhere, including bank evictions and foreclosures, employers who pay low wages, cuts to public education and other public services, as well as exorbitant rent and unfit housing by slumlords. All African-American and other speakers of color testified to the historical and present atrocities inflicted on their people by the police.

A Filipina speaker from Charlottesville raised connections between the U.S. military occupying her country and other nations such as Puerto Rico, and the police occupying communities of color and brutalizing LGBTQ people within the U.S. Many speakers also demanded money for people’s needs, not for more police and jails.

The rally concluded with all present pledging to continue the fight for justice for Kionte Spencer, to fight police violence, and to attend and/or promote community events, such as the first ever MLK Community Parade in Lexington, Va., set for Jan. 14, 2017. (carerockbridge.org)