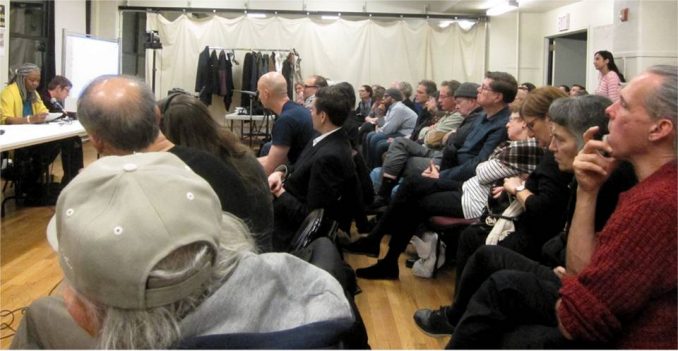 Hands Off Syria on Dec 2.

New York – It was standing-room-only at the Manhattan Theatre Club. People not able to find seats stood in the hall or in the back to hear members of the Hands Off Syria Coalition report on what the next U.S. president might mean for the war in Syria.

The panel discussion on Dec. 2 kicked off a national speaking tour that will headline Eva Bartlett, an independent journalist, along with local activists in different cities. Also participating were Dr. Ghias Moussa of the Syrian American forum, Margaret Kimberley of the Black Agenda Report and Sara Flounders representing the International Action Center. The tour will also bring speakers to audiences from Detroit to Denver and several cities in California. Bahman Aziz of the U.S. Peace Council chaired the event.

Bartlett, who had just returned from East Aleppo, spoke about how Syrians were pleased to hear that there are people in the West who support their struggle against foreign-backed fighters and can see through the haze of corporate media fog surrounding the war.

Moussa told the audience what life in Syria was like before the war began to tear the country apart. Bread was subsidized, education was free and sectarianism was kept in check by the state.

Kimberley drew connections between racism in the United States and the racism inherent in the foreign policy of destruction that has decimated Libya, Haiti and Syria.

Flounders spoke of the need to resist Donald Trump, as his foreign policy is likely not to deviate too much from the previous administration and that, if anything, the violence and grief the Syrian people have suffered over the last years will increase under a Trump presidency if there is no resistance.

Many attending were curious about how the new presidency might affect the situation in the Middle East. While Hillary Clinton was certainly openly belligerent in her plans for Syria, some have assumed that Trump will be less exuberant about continuing the U.S. government’s decades long brutal onslaught against the people of the Middle East and North Africa.

As many of the panelists pointed out to the audience, the U.S. history of war across the world is not new, and indeed knows no party affiliation. In the Gulf War of 1990-1991, President George H.W. Bush, a Republican, sent U.S. forces to Kuwait and later invaded Iraq. Sanctions on Iraq were continued under President Bill Clinton, a Democrat, and a second war against Iraq was launched in 2003 by George W. Bush, a Republican. The same bipartisan treatment has been handed out to Palestine, as year after year the U.S. government funds and arms the Israeli apartheid machine that dumps white phosphorus on hospitals in Gaza.

The panelists indicated that we shouldn’t expect much of a change between a Democrat like Obama and a Republican like Trump when it comes to the war in Syria. All were in agreement that we need to build a strong coalition that is ready to take militant action against Trump’s racism and imperialism.

More dates for the Hands Off Syria Campaign speaking tour are:

For detailed information about each of these events, please visit the coalition’s website at HandsOffSyriaCoalition.net.