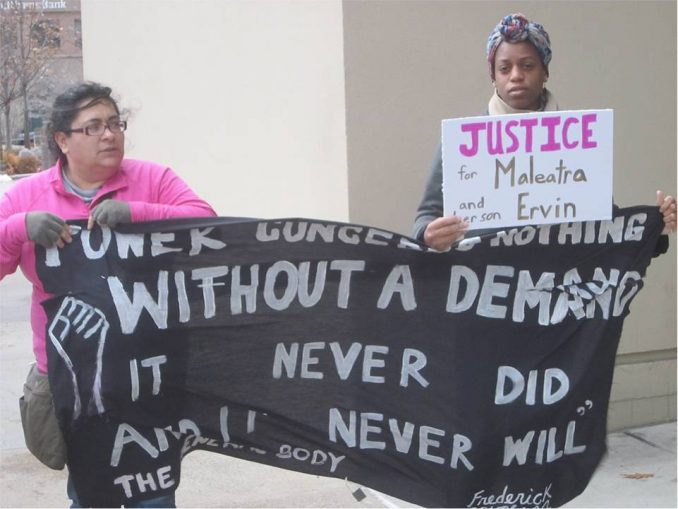 Syracuse cop Chester Thompson raped Maleatra Montanez on Valentine’s Day 2015 after she called 911 for help finding her missing 15-year-old daughter. When Thompson arrived, in uniform and armed, he demanded sex and threatened Montanez’s infant son if she did not comply. Other women had previously filed complaints against Thompson for sexual assault. “Counseled” by the SPD, he had always been allowed back to active duty.

Montanez reported the crime immediately and agreed to a rape kit test. But when Thompson was brought to trial in December 2015, he was found guilty only of a “misconduct” misdemeanor and received no jail time. Though fired from the SPD, he was allowed to keep his pension, and continues to live and walk free in the city.

An outrageous loophole in New York state law protects rapist cops unless the “alleged victim” explicitly says no and refuses. This legalizes cop rape. As BLM activists cogently asserted in an open letter to city and county officials, which was read at the rally: “Sex demanded by an officer of the state, wearing a gun, in your house, is never sex given with consent, whether the victim says no, yes, or nothing.”

SeQuoia Kemp of BLM Syracuse spoke on the intersectional impact of racist, anti-woman and anti-LGBTQ state violence directly on the bodies of women of color, trans women and trans people. Herve Comeau, also of BLM, condemned the “criminalization of people of color and poor people” by a “system that robs us of justice every day.” Comments by BLM organizers Anthony Harper, Yanira Rodriguez and Nikeeta Slade energized ralliers, who stood in line to sign up for information on how to keep protesting.

Maleatra Montanez has valiantly kept alive the fight for justice for herself and other women raped by Thompson. She demonstrated immediately in front of Syracuse City Hall with a few friends after the slap-on-the-hand verdict. When asked her demands, she said she wanted an apology from the city for herself and her son and “for this never to happen again to anyone else.” (Syracuse Post-Standard, Dec. 22, 2015)

Because of her perseverance, other women have come forward with accounts of cop rape by Thompson. In a July 2015 essay posted on the website of the Love & Rage Media Collective, Liz El Bayadi recounted how 20 years earlier, when she was only 18, Thompson threatened her with arrest for underage drinking to make her submit to rape.

Cop rape, like murder-by-cop, is not committed by just a “few bad apples.”

BLM activist Vani Kannan gave statistics during the rally documenting that the second most common civilian complaint against police, after excessive force, is for sexual assault, which is 1.5 times more prevalent in cops than in men in the general population.

There are hundreds if not thousands of rapist cops unidentified for every Daniel Holtzclaw, the Oklahoma City cop sentenced to 263 years in prison in 2015 for using his police database to locate and then rape vulnerable women of color.

For people in the grip of the so-called “justice system,” who are disproportionately poor and of color, cops are not the only people sexually assaulting them. Besides rape by prison guard after sentencing, there are also judges.

The same day as the Syracuse BLM rally, a local newspaper ran a story with this headline: “North Country judge accused of reducing and paying traffic fines for sexual favors.” (Syracuse Post-Standard, Nov. 30) The euphemism “sexual favors” means rape, since no consent is possible when the person demanding sex is a judge with a gavel in his hand, ready to hammer punishment into your life.

Fighting back and winning against this abuse are possible. In a recent victory, a massive coalition of Oakland, Calif., groups in the Anti-Police Terror Project and the Take Back Oakland Coalition have been unrelenting in exposing police violence and abuse, including rape.

Three Oakland police chiefs were fired in a span of nine days in June because of revelations of a departmental “sex scandal.” Numerous Bay Area cops across several cities and counties have been indicted on felony charges for rape and sexual assault.