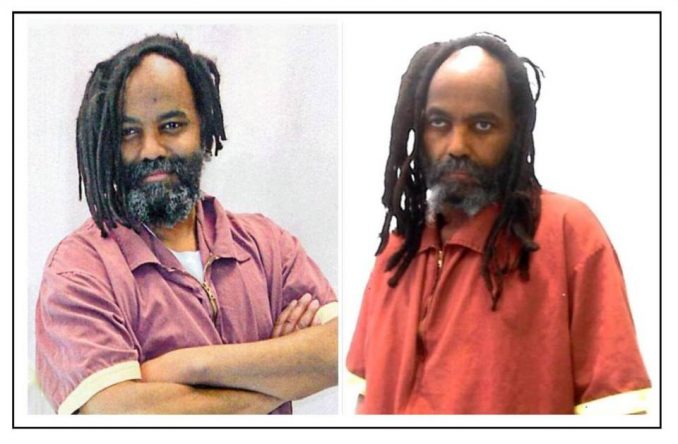 Philadelphia – A street rally and indoor panel discussions here on Dec. 9 will focus attention on a major health care crisis, made worse by polluted and even toxic water in state prisons. Political prisoner Mumia Abu-Jamal’s supporters are raising the issue of untreated hepatitis C, which affects 7,000 prisoners in Pennsylvania.

Thirty-five years after being unjustly incarcerated and sentenced to death row and later having his sentence converted to life in prison without parole, Abu-Jamal, who suffers from untreated hep C, is once again threatened with a state imposed “death sentence.”

The Pennsylvania Department of Corrections has refused to provide lifesaving drugs that could cure him and the other prisoners.

The rally starts at 3 p.m. at the Frank Rizzo statue at 15th Street and JFK Boulevard, chosen to express solidarity with the #FrankRizzoDown campaign. The REAL Justice Coalition started the campaign to have this statue of notoriously racist former mayor and top cop Rizzo taken down.

Pam Africa, minister of confrontation for the MOVE organization, told Workers World, “We got Mumia off death row. Now we are demanding an immediate hep C cure for Mumia and other Pennsylvania hep C infected prisoners. Mumia and many others are very sick and will die if the state keeps refusing to treat them.”

In December 2015, during a court hearing on Abu-Jamal’s behalf before Federal Judge Robert D. Mariani, the Pennsylvania DOC accidently let slip that the state’s “protocol” withholds hep C treatment until a prisoner suffers life-threatening severe sclerosis of the liver. Only 50 prisoners have received treatment.

While denying Abu-Jamal’s lawsuit, Mariani declared that the state’s protocol was unconstitutional. Lawyers for Abu-Jamal and other prisoners have charged that even delaying treatment is “cruel and unusual punishment.”

New antiviral medications Harvoni and Sovaldi with 95 percent cure rates for hep C have been available since 2013. However, the pharmaceutical industry charges around $94,000 for a 12-week course, putting it out of reach for millions of people, including prisoners if the state won’t pay.

“There are 3.2 million people in the United States living with Hepatitis C. This is unacceptable when there is a cure for the illness,” said Prison Health News’ Teresa Sullivan, who will be speaking on Dec. 9.

The latest guidelines from the American Association for the Study of Liver Disease and the Center for Disease Control recommend that all chronic hep C patients be given the antiviral drugs without regard to severity of symptoms. Despite these guidelines, less than 1 percent of U.S. prisoners are receiving treatment for hep C.

At SCI Mahanoy and SCI Frackville water is so toxic that prisoners cannot drink it or bathe in it. This crisis and similar unresolved water problems at other prisons prompted the Philadelphia City Council to call on Gov. Tom Wolf and the Pennsylvania state Legislature to “ensure that individuals incarcerated and working in state prisons have access to clean water and proper health services.”

The Dec. 9 program will also give updates on a new lawsuit, which could reopen all of the decisions made against Abu-Jamal since 1998.

The program will conclude with a discussion on the tasks ahead to win Mumia’s freedom. It also will respond to Abu-Jamal’s call to build a united front to confront the incoming national racist billionaire administration.

“As the Trump presidency takes shape … let us build movements. Let’s lift our hearts. Let us remake our history with the brick and mortar of struggle,” Abu-Jamal said on Prison Radio on Nov. 21.