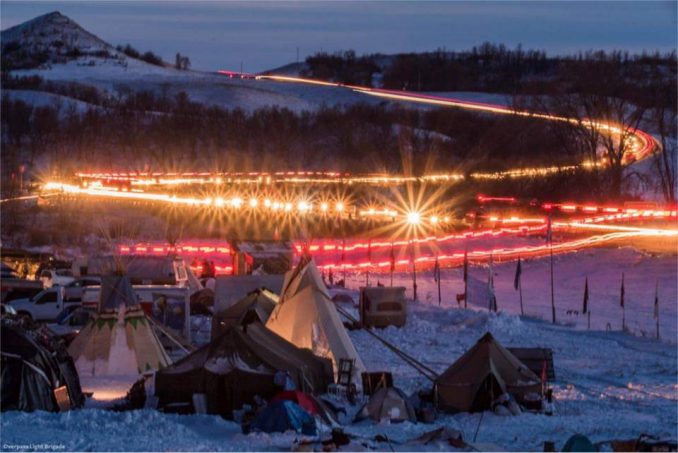 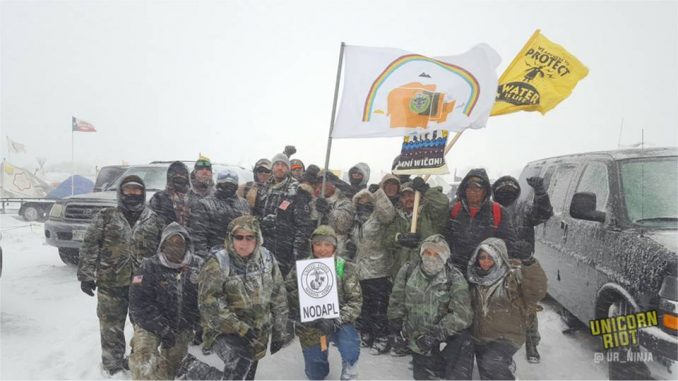 Dec. 6 — In a full-blown North Dakota blizzard, thousands of veterans, many of whom were stationed in Iraq and Afghanistan, led a march Dec. 5 to Highway 1806 Backwater Bridge in solidarity with the Lakota, Dakota and Nakota Nations of Standing Rock. The bridge is the site where police viciously used concussion grenades, teargas, water cannons and more against unarmed water protectors on Nov. 20.

The veterans mobilized delegations of thousands to come to Standing Rock the first weekend in December to act as human shields to protest the ongoing illegal construction of the Dakota Access Pipeline on Sioux land, a $3.7 billion pipeline that will span four states. The ranks of those standing with Standing Rock swelled to an estimated 20,000 people.

The federal government’s Army Corp of Engineers (ACoE), which controls some of the land and permits for where the pipeline is being built, had issued a Dec. 5 “eviction notice” to water protectors to leave their encampments.

As the veterans — many of them Indigenous, along with hundreds of non-Native vets — descended upon Standing Rock, the ACoE suddenly issued a statement on Dec. 4 saying that they would not grant an easement for the pipeline to be drilled under the Missouri River at Lake Oahe, which is part of Standing Rock’s unceded treaty land. The Obama administration, largely silent on the crisis at Standing Rock for months, announced it was sending a federal mediator to monitor potential “violence” — having failed since August to take any action at all to stop the violence that was suffered repeatedly by water protectors.

Many in the water protector movement were joyous upon hearing this news from the ACoE, but their celebration was short-lived. Energy Transfer Partners and Sunoco Logistics Partners (SXL), Wall Street corporations backing the pipeline, announced several hours later that they were not beholden to the ACoE statement and that they planned to drill under Lake Oahe regardless of whether an easement had been granted.

ETP and SXL had filed an action in federal court on Nov. 14 and issued a press release Dec. 4, stating, “The White House’s directive today to the Corps for further delay is just the latest in a series of overt and transparent political actions by an administration which has abandoned the rule of law in favor of currying favor with a narrow and extreme political constituency.

“As stated all along, ETP and SXL are fully committed to ensuring that this vital project is brought to completion and fully expect to complete construction of the pipeline without any additional rerouting in and around Lake Oahe. Nothing this Administration has done today changes that in any way.”

Since last April, members of the Standing Rock Sioux Nation have been in the forefront of uniting hundreds of other Indigenous Nations throughout the Americas to stop this pipeline that threatens the desecration of ancestral lands, violates the 1851 and 1868 treaties signed between them and the U.S. government upholding the Sioux people’s right to land sovereignty, and poses a real threat of poisoning the water supply for at least 17 million people, with the potential of inevitable pipeline leaks.

Facing down horrific violence on the part of the Morton County, N.D., Sheriff’s Department, along with that of the G4S Private Security Firm (armed mercenary thugs), thousands of water protectors have braved tear gas, hypothermia from freezing water shot out of water cannons in below-zero temperatures, bites from vicious attack dogs, rubber bullets and more from the repressive state.

Complicit in this violence have been the pro-establishment media like CNN, MSNBC, Washington Post and New York Times that have whitewashed any major coverage of this significant development that shines a bright light on environmental racism for profit. When there was any coverage at all by the mainstream media, their reporting was often shamefully biased by falsely accusing unarmed water protectors of perpetuating violence against the highly militarized state police and mercenaries.

But in social media, especially Twitter and Facebook, there were reports on every delegation coming to Standing Rock in the ones and twos, in the hundreds or even thousands. That resulted in anywhere between 8,000 to 20,000 or more people in the various camps, all dedicated to halting the pipeline construction. Except for that communication, this important struggle could have succumbed to isolation and alienation which always historically favor the interests of the 1%.

The steadfast resistance to the DAPL by the Sioux and other Indigenous Nations fighting the powers that be for their land and resources has inspired organizations and individuals to travel to Standing Rock to show solidarity.

An apology from veterans

And then there are the veterans led by Wesley Clark Jr., who traveled to Standing Rock from many states in cars and vans to oppose the DAPL. The veterans built barracks at the campsites to keep out the below-zero temperatures.

Before the Dec. 5 march to the Backwater Bridge took place, the veterans participated in a prayer service where Clark, speaking on behalf of the veterans, made a public apology on bended knee to Indigenous elders for U.S. genocidal crimes committed against Indigenous peoples, their land, their culture and resources. A Sacred Fire ceremonial dance led by Indigenous veterans took place at Oceti Sakowin Camp near the bridge.

Indicating that this is just another phase of the #NoDAPL struggle despite winter temperatures, John Bigelow, head of the Oceti Sakowin camp’s media committee and a member of the Standing Rock Sioux, stated, “As water protectors, we have a responsibility to be stewards of the water. We declare here today, we are not going anywhere.” (tinyurl.com/je3l4km)

Loan Tran, a member of the Durham Branch of Workers World Party who recently traveled to Standing Rock as part of a North Carolina delegation, told WW: “What we saw in Standing Rock was not just a struggle to stop a pipeline, but a continuation of the fight for Indigenous sovereignty that Native people have been waging for centuries. With tens of thousands of people working and living in the encampment, the struggle at Standing Rock is a reminder and example to us all of the power and necessity of solidarity with national liberation movements everywhere.”

Mahtowin Munro contributed to this article.