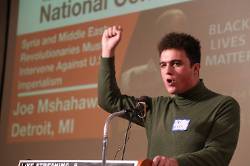 Simultaneously the imperialist powers began the arduous process of redrawing the Middle East and Northern Africa on the basis of a secret Sykes-Picot 2.0. [The original Sykes-Picot was a secret 1916 agreement between Great Britain and France (the Russian Empire also agreed to it) that defined mutually agreed spheres of influence and control in Southwestern Asia.] Its aim was to destabilize independent states and halt any force from gaining any semblance of independence. The war against Syria would be impossible without the destruction of Iraq, the continued occupation of Afghanistan and the total devastation of Libya.

Many people contend that the goal of this war is so-called regime change.

This phrase creates an illusion of one set of interests leaving a state and another set entering. This could not be further from the truth — and don’t let anyone tell you otherwise. The aim of imperialism in Syria is the complete liquidation of the Syrian state and Syrian society.

After Syrians won their independence from French colonialists [in 1946], they built a pluralistic state on the basis of self-determination and anti-Zionism. If the imperialists have their cake and eat it in Syria, we are looking at the prospect of a global war between the United States and Russia, which will not back down from its support for Syrian self- determination. We are also looking at a situation where most colonized countries are at risk of complete Balkanization [breakup of a region into smaller, often hostile units].

Despite Trump’s empty promises, he has no power or intent to step back the U.S. role in Syria. There is no turning back for imperialism in Syria.

Thousands of mercenaries, heavy weapons and toxic reactionary ideologies have been funneled into Syria. This is not something you turn on or off like a switch when you come into office. This is something that Syrians are actively resisting; it is up to us to support their resistance by any means necessary.

Allow me to be absolutely clear about an important facet of this conflict: The U.S. is not fighting the Islamic State group or al-Qaida in Syria. Supposedly imperialists have been fighting a 15-year war on terrorism; yet this terrorism has become a thousand times stronger, a thousand times more fierce. In many ways these reactionary terrorist groups are direct proxies of the imperialist powers.

The imperialists might not have the ability to dictate every action, but they have consistently given their proxies material support and continue to share their aims across the entire region.

We must be vigilant of more than just U.S. escalations in Syria. Turkey, NATO’s Middle Eastern nuclear weapons base, has played a large role in the war against Syria. Turkey is tottering down a path of civil war on its own streets while simultaneously furthering its imperial ambitions in Syria and Iraq. It is almost a certainty that Turkey will be utilized to expand the NATO role in Syria, widening the scope of the war.

Self-determination for Syrians comes above all else right now. Attacks on the Syrian state and their military allies from the Western anti-war movement accomplish nothing progressive. On the contrary, they support the argument for a stronger role for U.S. imperialism.

The cause of Syrian self-determination now extends past the borders of Syria into Europe. Millions of Syrians have been forced into Europe and are living in genocidal conditions among other peoples from the Middle East and Africa. Trump’s victory and the rising ultraright pose an existential threat to Syrians in their homeland and in the streets of Europe.

Workers World Party and our allies have always been strong proponents self-determination. We must continue to build and organize around this principle while also consciously challenging the propaganda war being waged against Syria. It is imperative that everyone get organizations and struggles they know involved in the new Hands Off Syria Coalition.

The nature of the war against Syria mirrors many imperialist methods of oppression in the West, and these ties can actively be made. Just like the pigs are out here on these streets everyday lynching people of color, reactionary death squads in Syria are committing genocide against Kurds, Christians, Druze, Shia and Sunnis who will not submit! Standing Rock and the movement against war in Syria need to actively build together. Both are fighting a struggle for self-determination against the same enemy!

A country that oppresses others will never be free. The only road to peace: U.S. out of the Middle East!