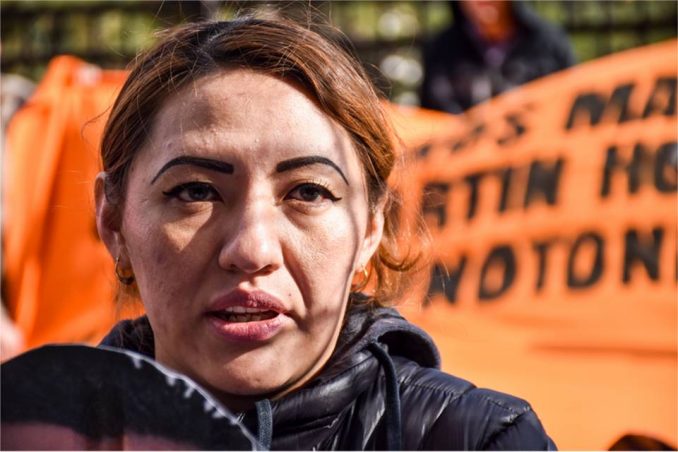 A march Nov. 21 on the Philadelphia office of Immigration and Customs Enforcement demanded a halt to deportation proceedings for Pittsburgh construction worker Martín Esquivel-Hernández. The demonstration by family members and supporters represented a growing movement of activists in Pennsylvania and other states willing to march in the streets, provide sanctuary and carry out civil disobedience even before President-elect Donald Trump takes office.

Trump has promised to deport up to 11 million migrant workers and their families, build a wall on the U.S.-Mexican border and cut funding for cities that refuse to cooperate with ICE.

Esquivel-Hernández was an activist in the Latino Parents Council, in the A+ Schools Community Alliance for Public Education, and a facilitator, along with his spouse Alma Brigido, for the recently completed Latino Needs Assessment Project to examine the challenges confronting Latinx families in Pittsburgh’s Allegheny County.

Racially profiled in a traffic stop in the affluent suburban town of Mount Lebanon, Esquivel-Hernández was cited by police on March 26 for driving without a valid license and without insurance. Currently, 12 states and the District of Columbia allow undocumented residents to receive a driver’s license. Lucha Pro Licencias PA and other groups have been fighting for seven years to make Pennsylvania the 14th such area.

Esquivel-Hernández paid his fine on April 21, and according to U.S. District Court case records, he was identified as undocumented on April 25. On May 1, he and his family marched in an immigrants’ rights rally from Beechview to Brookline. He and his young daughters held a sign that read: “Not one more deportation.”

The next morning, at 6 a.m., ICE officers took Esquivel-Hernández from his Pittsburgh home.

Even though Esquivel-Hernández didn’t meet the agency’s established criteria for detaining and deporting undocumented residents, such as being a threat to public safety or national security, ICE continues to hold him in a for-profit prison in Youngstown, Ohio.

Martín’s alleged crime is not that he is in the U.S. without authorization (being undocumented is not a crime). Rather, U.S. Attorney David J. Hickton has decided to criminally prosecute Martín for “re-entry after deportation,” for having repeatedly tried to cross the U.S.-Mexican border to be with his spouse and children.

Before marching, the Pittsburgh activists joined Philadelphia immigrant rights activists at the Arch Street United Methodist Church in Center City, where Javier Flores, his spouse and three children have received sanctuary since Nov. 13. Flores is a 40-year-old native of Mexico City who came to North Philadelphia without papers in 1997 and started a family. Since then, he has been deported and re-entered the U.S. several times, has endured 15 months in jail and was once again targeted to be deported on Nov. 14.

Black lettering on a twenty-foot-long orange banner at the front of the march read, “Devuélvenos Martín,” “Bring Martin Home,” “#NiUnaMas,” and “Sign the petition at KeeptheEsquivelFamilyTogether.com.” At the end of the march, in front of the ICE offices, Alma Brigido said, “These injustices are happening all over the United States to many families. … This has got to stop.”

Since the election of Trump on Nov. 8, thousands of students, professors, alumni and others at U.S. universities have signed petitions asking their schools to protect undocumented students from deportation.

Philadelphia and Pittsburgh are both sanctuary cities. They are two out of 300 cities from Seattle to Portland, Maine, where policies have been enacted to refuse to cooperate with immigration officials or persecute or track undocumented migrants.

The New Sanctuary Movement in Philadelphia has recruited over 750 people to join their Sanctuary in the Streets campaign, with the intention of disrupting ICE raids and supporting the families being targeted.