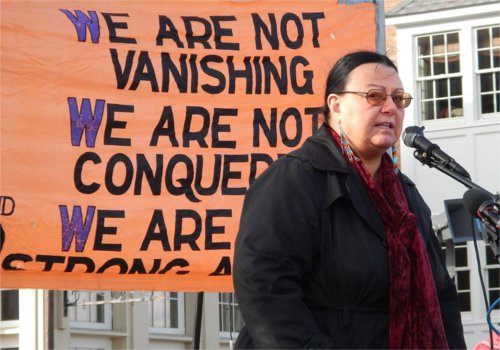 Mahtowin Munro, of United American Indians of New England, gave this talk at the National Day of Mourning commemoration in Plymouth, Mass., on Nov. 24.

We give a big shoutout to the hundreds of people from this region who are in Standing Rock, N.D., right now, but are also standing with us in spirit today.

All of you will have heard at least something about the courageous resistance of thousands in North Dakota against the Dakota Access Pipeline. Some of you have even been able to travel there to show your solidarity.

Since last April, water protectors from the Standing Rock Reservation in North Dakota and from all over Turtle Island have been pouring in to stop the Dakota Access oil pipeline that is scheduled to run through four states and under the Missouri River and which threatens the drinking water of millions of people. The pipeline runs through unceded treaty land and sacred ancestral sites.

There is unprecedented unity in the gathering of Nations at Standing Rock, with people from not only the Americas, but also Kanaka, Sami, Maori, Australian Indigenous and many more. Standing Rock has been the biggest display of Indigenous resistance and unity any of us have ever seen.

Yes. It is something new happening just this year. It is a new awakening or reawakening for millions. Yet it is also part of a continuum of Indigenous struggle that stretches back for centuries — to Taino resistance, to Metacom trying to unite everyone to push the English back into the ocean, to the Wounded Knee occupation in 1973 and to the Kanesatake and Kahnawake Oka summer of 1990.

Let us do everything possible to preserve the unity that now exists among Indigenous Peoples. We are going to need it for the struggles ahead. There is unprecedented support from non-Native people, some of whom are risking their lives by locking down or standing on the frontlines.

The peaceful #NoDAPL struggle has been met with intense repression. Law enforcement, including police from other states, and the National Guard block roads. They have repeatedly pepper-sprayed, teargassed and shot peaceful water protectors with rubber bullets. They have used sound cannons. They used water cannons against our people in freezing cold temperatures. They drew loaded weapons as people were praying. They have thrown concussion grenades directly on people’s bodies resulting in critical injuries. Sophia Wilansky’s arm was pretty much destroyed, and many more people were injured in an hours-long attack which began on the night of Nov. 20.

People’s right to travel and communicate freely has been restricted. This insane response has been coupled with security guards hired by the pipeline company pepper-spraying protectors and sending specially trained attack dogs against them. Hundreds of people have been arrested; some of them were held in dog cages, many of them strip-searched, Elders have been arrested for praying on their ancestral lands. Very little of this has been covered by the corporate media.

Through all of this, the federal government has refused to step in and put a stop to what is going on. Energy Transfer Partners [corporate owner of DAPL] is preparing to drill under Lake Oahe. President Obama, who promised years ago that he would stand with the people of Standing Rock, his Department of Justice and other officials have for months turned their faces away from the people, the violence and human rights abuses.

While Standing Rock is very much on our minds, there  are many other defenses of land and water throughout the Americas. All over Turtle Island, pipelines, fracking, mining and damming projects are being pushed through on Indigenous land. When these projects happen, man camps often spring up. This is a factor that leads to trafficking of Indigenous women and MMIWG2S [missing and murdered Indigenous women, girls and two-spirit people], which is thought of as a Canadian issue, but is a big problem in the U.S., Mexico and other places, too. The contempt for the lives and bodies of Indigenous women is deeply intertwined with the disrespect that settler colonialism has for the water and land.

In Mexico, Guatemala, Honduras and other places, Indigenous activists are being murdered. The University of Hawaii tried to push through the TMT [Thirty Meter Telescope], the world’s largest telescope project, atop Hawaii’s sacred Mauna Kea. Native Hawaiians rapidly organized and blocked the construction there, but the struggle is not fully resolved yet.

In Arizona, crooked politicians such as Sen. John McCain brokered a deal to hand over the sacred Oak Flat area to a mining company, but the San Carlos Apache have been fighting against that. The National Park Service has placed the site on the National Register of Historic Places, but that does not completely halt any mining proposals.

The Canadian government recently approved a massive LNG [liquified natural gas] project on the coast of British Columbia, and continues to push for more pipelines and damming projects that will destroy the land and water. They are always met with stiff opposition. In Nova Scotia, the Alton Gas project recently had to back down because Mi’kmaq people exercised their treaty rights and organized fierce resistance.

So many things come back to the water. Mni wiconi: Water is life. The U.S. has such a high overall living standard, yet families all around the country are having their water shut off. Families in cities like Flint are being poisoned.

What you may not know is that at least 13 percent of Native families in this country do not have tap water or a toilet, and many more do not have safe drinking water. Navajo babies in some parts of their reservation are born with uranium in their tiny bodies because the water is so contaminated due to generations of outside mining companies exploiting the natural resources there. At least 93 First Nations communities in Canada are under longterm boil-water advisories, some of them for decades.

I know some people are feeling discouraged or overwhelmed by so much happening lately. Don’t give in to that too much. Don’t be immobilized by fear. We have too much work to do. If you feel afraid, you will be a lot more afraid of what will happen if we do nothing. You may be feeling like you just woke up to a nightmare. Indigenous people and many other relations have been living that nightmare for centuries, and we are still here and we are still fighting.

Everywhere you look, protectors are defending land and water. There is no turning us back. We are not leaving or going anywhere. Our roots are here; they do not extend across the ocean.

Now more than ever, we need combined action. When we unite like we are doing today, we are powerful. That is what scares the government and corporations like Energy Transfer Partners. That is why they are trying to squash what is happening at Standing Rock and elsewhere. Don’t allow them to stop or divide us.

Maybe Standing Rock has made you rethink your relationship with the land and water. What is happening should be sparking discussions and education about what Native sovereignty truly means and what a treaty represents. Some people are surprised when we speak about Native Nations, rather than “tribes.” Some non-Native people, in fact, never even thought of the concept of Native Nations before, and what it means to have sovereign Nations within the U.S. when everyone is taught that we are a melting pot of “one nation under god.”

Some of us dare to envision much more — decolonization, ridding ourselves of the ideas that colonialism has embedded in us; resisting the subjugation of our bodies, minds and lands, freeing our minds and our lands; turning to our own languages and understandings of every aspect of life; and rediscovering the power of our own institutions. But that is a conversation for another day.