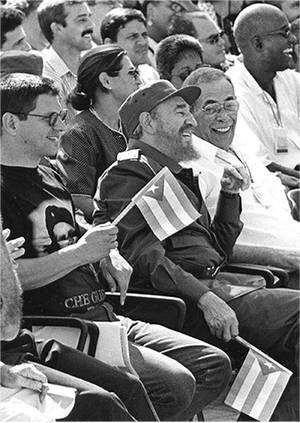 The annual meeting of the National Network on Cuba included a public event at the University of Illinois in Chicago on Nov. 19-20. Arriving guests viewed images of Cuba’s historic leader Fidel Castro taken by Roberto Chile for Fidel’s 90th birthday. The speakers, cultural presentations and audience itself showed the depth of support in the U.S. for the Cuban Revolution. New generations showed their strength, involvement and leadership.

With the recent easing of U.S. government restrictions that had long blocked Cuban representatives from traveling outside New York City and Washington, D.C., this meeting opened broader dialogue in the U.S.

“Those who have visited Cuba know much about what the youth are doing in the university, in the research centers. They are leading the most important aspects of the dialogue between the U.S. and Cuba, because we have identified health care exchanges and so on. We are also proud to say that young people all over the world celebrated the 90th birthday of Fidel, as well as in Cuba.”

In a city infamous for racism, police outrages and economic hardship, Aislinn Pulley, co-founder and lead organizer with Black Lives Matter Chicago, came to the meeting from the funeral of yet another victim of police killings. She rejected the “duopoly” of the Democratic and Republican parties, pointing out that Chicago’s mayor is a Democrat, but the police killings continue. The elected officials in Ferguson, Mo., are also Democrats.

She asked, “What does justice look like? What is an alternative to the present misery so many people are living in? When we struggle we can win. When we fight we do win. That is the lesson of Cuba. Despite being a tiny country of 10 million-plus people and only 90 miles from the shore of the largest superpower the world has known, the Cuban Revolution is alive and thrives.”

Noting that she had been to Cuba three times, Pulley said, “The example of Cuba, particularly in the work I have been involved in, is really important because of the mothers whose children were murdered by the [Batista] dictatorship. They took the streets in Havana and they led marches. And it is the mothers who are leading the marches here in Chicago and across this country. It is the example of that resistance that we emulate, that can teach us to look beyond the mythology of the duopoly in this country, to create a system that is actually provided for and governed by the majority of the populace. The possibility of Cuba is not a mythology. It is a reality.”

Abeeku Ricks, a 2016 graduate of Cuba’s Latin American School of Medicine (ELAM), shared his gratitude to Cuba and explained how different education is in Cuba. “My generation is the health care activists in the world. In the 60s Cuba sent soldiers, now they are sending doctors. Fidel Castro called it one of his greatest accomplishments, the army of white coats.”

Ricks shared that he has friends and family members who have been killed by police here: “Our lives do matter. Cuba put it into perspective how Black people can replicate the Cuban revolution. Cuba has a place in my heart.”

Four Venceremos Brigadistas crafted an interactive discussion to look at anti-oppression and anti-racism as a priority in Cuba solidarity work.

The Interreligious Foundation for Community Organization and the National Lawyers Guild alerted the meeting to two serious attacks on the Cuba solidarity movement. U.S. government agencies are attempting to punish IFCO for its Friendshipment Caravans by stripping the parent organization of its tax-exempt status, and they are attempting to fine Floridian Albert Fox $100,000 for traveling to Cuba. IFCO outlined its plans to organize against the U.S. blockade of Cuba with caravans in April and a travel challenge in July.

A fourth panel examined the definition of ethical travel to Cuba, describing a new organization of travel providers called RESPECT, whose stated principles encourage respect for Cuba’s laws, regulations and sovereignty when planning travel there.

Video of these panels and the public meeting are available at Facebook.com/CubaNetwork, and will be posted soon to NNOC.info.