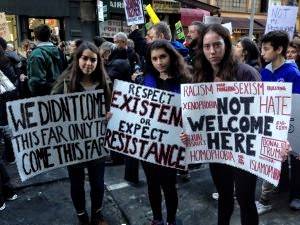 Hours before the final vote tally on Nov. 8, tens of thousands began to march here against Trump. They have continued day and night through midtown Manhattan, rejecting the white supremacy, misogyny, Islamophobia and immigrant bashing he represents.

Trump’s election has inspired many people to protest for the first time in their lives. Many marchers are looking for political answers beyond the two-party system, and members of the People’s Power Assembly NYC, Workers World Party and allied groups have been in the streets to provide those answers.

Members of those organizations have also acted decisively to remove pro-Trump agitators from the crowd and challenge police attempts to control the protests.

On Nov. 8, New York responded to the election of Donald Trump with 30,000 to 50,000 people in the streets. The large crowd assembled downtown at Union Square and marched north two miles on Fifth Avenue to Trump Tower, chanting all the way. Participants were mostly people new to the struggle. They were overwhelmingly young, with many of high school age.

The mood of the crowd became increasingly militant and chants more angry as the huge throng approached Trump Tower, barricaded with garbage trucks. A line of cops and metal barricades confronted the demonstrators. But police had to construct a second row of barricades as the crowd shoved to get through the first fence. A few dozen demonstrators were arrested over the course of the night.

The enormous anti-Trump marches show no signs of slowing, threatening the holiday shopping season along Fifth Avenue, playground of the ultra-rich.