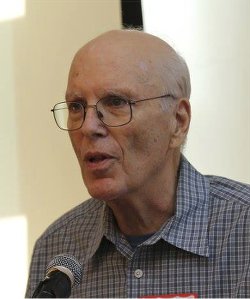 I send my greetings to the 2016 Workers World Party Conference. I have attended every conference since 1962, but medical reasons did not permit it this year.

I want to congratulate the Party on running a dynamic election campaign. I also want to send special greetings to the many youth attending the conference.

The firestorm of local demonstrations that has greeted the victory of the racist, misogynistic, authoritarian billionaire Donald Trump is truly heartwarming. Boastful intimidation has been met by resistance from Portland to Miami, from Chicago to Dallas.

We are in a new political period in the U.S. It has been a new period since the simultaneous rise of Trump and Bernie Sanders. This signified a crisis for both political parties of the capitalist class.

The Democratic Party and the Republican Party have been the political pillars of U.S. capitalism since the Civil War. They have been the durable instruments that have sustained capitalist rule. Both these pillars are now trembling. And they are trembling as a result of the world capitalist economic crisis.

This crisis has undermined the multinational working class globally, and that includes in the U.S. The political crisis in the U.S. is catching up with the corrosive economic crisis and irreversible decline.

Our Party has prepared for and patiently awaited a political opening for revolutionary Marxism in the U.S. With the response to Trump and the Sanders campaign, as well as developments like the Black Lives Matter movement, there are rays of light beginning to shine through this opening.

Trump will not be able to fulfill his wild demagogic economic promises to the workers. You cannot restore jobs that have been destroyed and no longer exist because of technology.

The Democratic Party leadership is in a shambles and is becoming more and more discredited. This leaves the field open for a revolutionary party to plunge into the political and economic struggle and build up its forces with the aim of destroying capitalism altogether. Build Workers World Party!