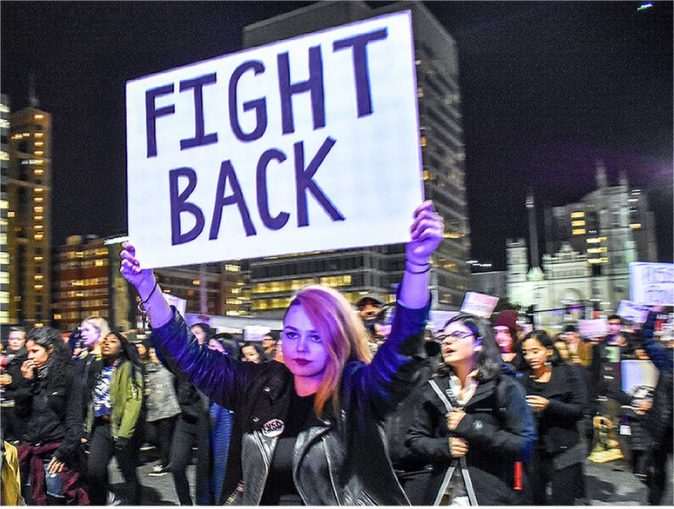 The photo was top of the news: Obama and Trump shaking hands in the Oval Office at the White House, with Obama saying “Give Trump a chance.”

But that gesture and those words reveal the rotten heart of capitalism at the center of the U.S. political system.

Trump’s first staff appointments confirm that he absolutely intends to use that “chance” and the power of the presidency to open direct economic and social war against people of color, workers, women, LGBTQ people, immigrants, people with disabilities and other oppressed groups in the U.S. In a Nov. 13 “60 Minutes” interview, Trump again promised mass deportations of millions of immigrants, defaming them as “criminals.“

Trump has appointed racist, anti-Semite Steve Bannon as his chief strategist and senior counselor. Bannon is a former Wall Street hedge fund manager and Goldman Sachs fat cat. He is also a hate monger-in-chief who presided as CEO of the alt-right Breitbart website, a cesspool for white supremacists and unabashed anti-Semites and racists.

Bannon was Trump’s campaign manager and “general” in their hate campaign to divide U.S. workers through racism and put Trump in office. Now the Goldman Sachs former partner will undoubtedly be chief strategist in planning a direct assault on workers, unions and social benefits.

That this war has already started is evident in the huge postelection increase in physical and verbal attacks against Latinxs, Muslims, African Americans, immigrants, Indigenous people, women, Asians, LGBTQ people and others.

The short list of those Trump might appoint as his “governing team” shows his blatant intent to exploit the people of the U.S. as thoroughly as a coal company decapitates a millennia-old mountain top to get to short-term profit.

On Trump’s list for interior secretary is former Alaska Gov. Sarah Palin, known for her Big Oil “Drill, baby, drill” chant and eagerness to devastate the environment. For attorney general or secretary of state, a leading contender is former U.S. Attorney and New York City Mayor Rudy Giuliani. Giuliani is infamous for his racist and aggressive policing of Black and Brown communities and his later business investments in militarizing law enforcement.

Health and Human Services might be headed up by either Rep. Tom Price or former Louisiana Gov. Bobby Jindal. Both want to overturn the Affordable Care Act and are anti-abortion. And Homeland Security? One Trump favorite is Joe Arpaio, former Arizona sheriff who defied federal law to super-persecute immigrants.

Trump’s election and his plan to try to govern the U.S. with these ultraright racists, woman-haters and anti-LGBTQ bigots have exposed the utter decay of the U.S. capitalist system, which has nothing to offer the workers.

People are afraid, yes, but they are also enraged. There have been huge demonstrations in the U.S. since Trump’s election. Grassroots organizing is underway everywhere, especially by the youth.

In meetings in Wisconsin, organized by the pro-immigrant group Voces de la Frontera, hundreds of people took a pledge together to strike and mobilize massive actions to stop the attacks underway and those that are coming.

Regardless of his “populist” rhetoric, Trump speaks for the tiny minority of billionaires in this country. The real majority has been in the streets every day since the election. And networking has already begun to bring tens of thousands of protesters to D.C. on Jan. 20 for the counterinaugural.

Give Trump a chance to attack our movement with his cast of bigots and exploiters? Not on our lives!