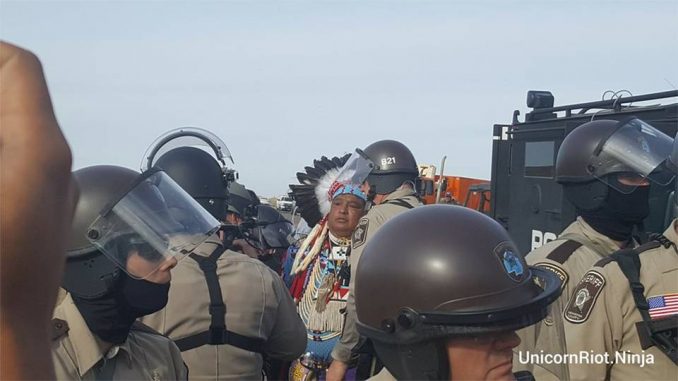 A Native elder in ceremonial dress, who was praying, is arrested by police and military at Oceti Sakowin Treaty Camp, Oct. 27.

On the morning of Oct. 27, a combined force of National Guard soldiers, private security guards and over 200 cops from multiple states mounted a war-level, no-fly zone raid on the Oceti Sakowin (Sioux) people and their supporters who were attempting to stop the Dakota Access Pipeline in North Dakota. The raid was on a winter Treaty Camp that water protectors had set up on unceded 1851 Oceti Sakowin treaty land, north of Standing Rock Reservation, to block further DAPL construction toward the Missouri River.

National Lawyer Guild volunteers at the scene documented that cops made racist taunts, damaged and destroyed sacred ceremonial items, arrested Indigenous elders and others as they prayed and arrested medics marked with the internationally recognized red cross emblem.

More than 140 people were arrested, in addition to 141 who were arrested Oct. 22. Police hid their names and badge numbers to prevent identification for abuse and brutality charges. The state blocked broadcasts of live video and Facebook.

The Standing Rock Sioux have formally opposed the $3.8 billion DAPL “energy project” since 2014. Along with other Native nations and allies, they have gathered along the Missouri River since April to stop the pipeline. It would carry up to 570,000 barrels of fracked Bakken crude each day. A rupture would contaminate the river providing water to 17 million people.

Between January 2012 and September 2013, North Dakota had nearly 300 oil pipeline spills out of about 750 “oil field incidents.” None of these were reported to the public.

Oceti Sakowin Chairman Dave Archambault said on National Public Radio on the day of the state’s attack: “They want to pipe this oil and threaten fresh clean water, threaten the environment, have eminent domain takings — for the purpose of who? Who benefits from it? It’s the billionaires who have oil interests who want to make more money.”

Financing for companies building the DAPL, including Energy Transfer Partners, adds up to $10.25 billion in loans and credit from 38 U.S. and international banks. The banks are betting that dirty-energy drilling and fracking for oil and gas will yield mega-profits on their loans.

Archambault noted that there is worldwide solidarity with Standing Rock, with people “willing to stand beside us as we go up against federal government, go up against state government and go up against large oil industry companies.”

The heroic resistance at Standing Rock is another moment in the centuries-old struggle of Indigenous nations to assert their sovereignty and their treaty rights against continual betrayal and outright war by the U.S. government in league with big business.

Solidarity continues to spread, and the #NoDAPL struggle is far from over.

When a Penobscot Nation water protector was arrested in the raids, a huge solidarity rally was held in Bangor, Maine. When the sheriff of Hennepin County, Minn., sent deputies to participate in the Oct. 27 assault, protesters occupied Minneapolis City Hall to demand that no local resources or people be used to attack the water protectors.

In New Orleans, the Take ‘Em Down NOLA group rallied to demand removal of an Andrew Jackson statue in the fabled square named for that slave-holding U.S. president and murderer of the Native Nations of the Southeast.

In San Juan, Puerto Rico, the Campamento Contra La Junta, opposing the renewed U.S. takeover of Boriken/Puerto Rico, hung a document in solidarity with Standing Rock on the gates of a U.S. federal building. In Canada, a protest by Kahnawake Mohawk community members blockaded the busy Mercier Bridge to Montreal.

Taking the DAPL protest to the U.S. elections, Lakota and other Native youth erected a tipi in Hillary Clinton’s Brooklyn, N.Y.,  campaign office. Virginia Student Environmental Coalition protesters occupied Clinton offices in Richmond, Charlottesville, Blacksburg and Fredericksburg. The students demanded Clinton declare herself against the DAPL — a demand she has not met.

And solidarity is still coming to the Oceti Sakowin at Standing Rock. A Labor for Standing Rock delegation arrived over the weekend of Oct. 29-30. One LSR member was Liam Cain, a union laborer at LIUNA Local 1271 in Cheyenne, Wyo. LIUNA is the union representing workers on the DAPL.

Cain appealed to the pipeline workers:

“To the union laborers working on these projects, I would just implore you to listen to what regular folks are saying. Don’t just listen to the bosses, and not to just the echo-chambers on the [site]. Listen to the water protectors, listen to folks talking about just transition, a view of the future, involving good-paying union jobs, involving many of your skill sets. Generating energy in a much more environmentally sustainable manner… .” (Labor for Standing Rock)

The United American Indians of New England (UAINE) Facebook page was the source of solidarity action information in this article.