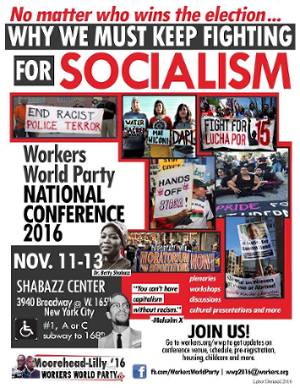 Nov. 1 — The national conference of Workers World Party is fast approaching. Slated for Nov. 11-13 in New York City, this gathering of revolutionaries from around the country and the world will be meeting just days after the U.S. presidential election. Whether Hillary Clinton or Donald Trump is elected, the struggle will continue for the workers and oppressed. That has been the main message of the WWP national election campaign, and it means more organizing, solidarity, Marxist politics and strategizing for the struggle ahead are in order. That’s what the WWP conference is all about.

Organizers of the revolutionary socialist conference have invited activists to participate. In a recent letter they stated:

“Many of us are disillusioned by the current state of things, but we have no illusions that things will get better on their own. Not only do we organize, we fight as if this were a war — a war on Black lives, a war on workers and oppressed people. As our battles intensify, many of us are thinking about how we must organize ourselves for the next phase — how we must convene our movement as the presidential elections will soon be over. Also, how we must build with each other and commit to solidarity — because so many people depend upon it: the Black Lives Matter movement, immigrant families, the LGBTQ community, women and the entire working class.

“On Nov 11-13, many of us are convening in New York City for the annual Workers World Party conference, at the historic Malcolm X and Betty Shabazz Memorial and Education Center, at 3940 Broadway (West 165th Street) in Manhattan. This will be a gathering of revolutionaries, activists, organizers, and community members who are fed up and say ‘No more!’ to the cruelties of capitalism and its innate racism, homophobia, sexism, Islamophobia, ableism and more.

“This conference is for those who are struggling to make sense of this election chaos, who are questioning the establishment, and who need to re-energize after a long year of battle. It will also take up why the multinational working class — our class — must and will prevail.”

Mond, a young African-American activist, told Workers World why he was traveling to the conference all the way from Port Huron, Mich.: “After studying revolutionary politics, I was looking for like-minded people to help me with my fight against fascism. I met Workers World Party and instantly had a direction. The national conference will be a great opportunity to learn from, meet and network with comrades from across the country.”

Conference organizers are planning cultural presentations, plenary sessions, workshops, break-out groups and other forms of discussion. It will be “a revolutionary weekend where we will reclaim our power, bring together the most oppressed, and prepare each other for the battles ahead. We say onward to a revolution, to the abolition of capitalism, and to a world where we decide who we are, what we need, and how we want to live in a socialist society — based on meeting human needs, not corporate greed.”

Please make plans as soon as possible to attend the Nov. 11-13 conference. Go to workers.org/wwp to register and for updates and conference schedule (still in formation). Conference organizers need information in order to arrange for adequate housing, meals and more.

If you cannot attend, please give a donation to help sponsor costs of transportation, food and housing so that young and low-income activists can participate.