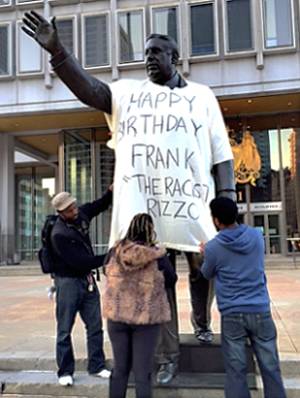 Around 40 people descended on the Frank Rizzo statue in Philadelphia on Oct. 23 on what would have been Rizzo’s 96th birthday. The crowd — organized by the Philly Coalition for R.E.A.L. Justice (REAL = Racial, Economic And Legal) — threw a mock party for the former police commissioner and mayor. The bash was highlighted by activists placing a shirt on the statue that read, “Happy birthday, Frank ‘the racist’ Rizzo.”

Rizzo was Philadelphia police commissioner from 1968 to 1971 and mayor from 1972 to 1980. In both roles, Rizzo targeted Black activists, including the Black Panther Party and MOVE, with harassment, beatings and arrests. A Pulitzer-Prize-winning expose by the Philadelphia Inquirer exposed that rampant police brutality was covered up under the Rizzo administrations.

His statue has been the subject of intense criticism. Many take objection to this homage to a man whose bias against the African, Latinx and LGBTQ communities is well documented. A petition to remove the statue has been created by the Philly Coalition for R.E.A.L. Justice: campaigns.organizefor.org/petitions/frank-rizzo-down