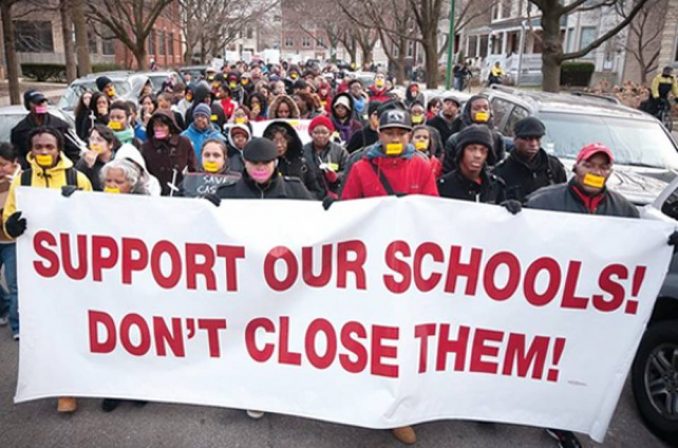 The Chicago Teachers Union and the city reached a tentative agreement overnight on Oct. 11. The union was prepared to strike, but its leadership was satisfied with the agreement.

The tentative agreement must be approved by the CTU’s membership and board. The union got most of what it sought, a striking achievement in the face of the city’s massive budget problems.  Most important, the city will continue to cover the teachers’ 7 percent pension payment.

In addition, the city agreed to smaller class sizes for kindergarten through second grade, built-in salary increases for teachers hired in 2017 who won’t be getting a pension pick-up, and more financial support for tenured teachers if they are laid off.

CTU President Karen Lewis said: “We ended up with something that’s good for kids, good for clinicians, good for paraprofessionals, for teachers, for the community. We’re very pleased we were able to come to this tentative agreement.” (Chicago Tonight, Oct. 11)

The union victory was secured by the threat of a massive strike and support for the strike from parents, students, and community and labor groups.  The CTU was able to take advantage of the weakened position of Mayor Rahm Emanuel’s administration, which has been on the defensive for months after disclosure of its efforts to cover up widespread police brutality and racism.

Teachers have been working without a contract for more than a year and were prepared to strike. A major goal of the strike was to stop an effective 7 percent pay cut being pushed by union-busting Mayor Emanuel and his unelected school board.

Winning these demands helps not only the teachers but also the students, who in Chicago are a majority Black and Latinx, and their communities.

Mayor Emanuel and billionaire Gov. Bruce Rauner contend that city and state budget crises mandate education cutbacks.  But there are numerous means to fix the budget without slashing public education, including a proposed financial transaction tax, ending privatization schemes and directing Tax Increment Financing (a mayoral slush fund) to schools instead of developers.

The school board also could renegotiate toxic bank loans.  Earlier this year, the board approved an additional $725 million in high interest bond debt and is in the process of incurring $850 million more.  The banks get their interest while teachers get shorted and classrooms deteriorate.

As Bill Iacullo, president of International Union of Operating Engineers Local 143, which supports the teachers, said: “Schools are suffering because hundreds of millions of dollars are being diverted every year from the classrooms to for-profit contractors.” (Chicago Tribune, Oct. 3)

Since last January, there have been more than 1,200 teacher layoffs, with 200 more announced in early October. As a result, education is being disrupted, and special education, wrap-around services and bilingual programs have been cut.

The CTU’s House of Delegates met Oct. 5 to review negotiations and discuss the organization of a possible strike. CTU President Karen Lewis told the delegates that solidarity is the key to winning this battle and called on parents to join them on the picket line to educate their children in the importance of fighting for their rights.

The next day, the CTU staged “walk-ins” at selected schools to garner support and protest budget cuts.

The union was joined by members of the Chicago Teachers Solidarity Campaign, a coalition of dozens of parent, labor and community groups that is supporting the teachers and would join the teachers’ picket lines in the event of a strike.

This support has its roots in widespread protests against Mayor Emanuel’s closure of 50 schools in 2013, which hit the Black and Latinx communities particularly hard and failed to produce the educational and efficiency gains promised by the city.

In April of this year, Chicago teachers staged a one-day walkout and held a rally at which they were joined by Black Lives Matter and Fight for 15, as well as an array of other labor and community groups united to fight the austerity program of Rauner and Emanuel.

The CTU recognizes that its members’ fight for justice is part of a broader fight against racism, poverty and social injustice.  A report issued by the union details “the intimate connection of health, housing, jobs, segregation and funding to education” and “demonstrates that challenges in housing, employment, justice and health care relate directly to education [and] require a narrowing of the opportunity gap brought on by poverty, racism and segregation.” (ctunet.com)

V.I. Lenin, in one of his last writings, recognized the “really high calling” of the schoolteacher and urged his Soviet colleagues to “improve [the teacher’s] position materially.” (Pages from a Diary, Selected Works, Vol. III, p.757. Progress Publishers, 1975).

No less today, the struggle of the Chicago Teachers Union for a fair contract was beginning to become a rallying point for social activists at a time when united struggle against austerity and for economic and racial justice is urgently needed.