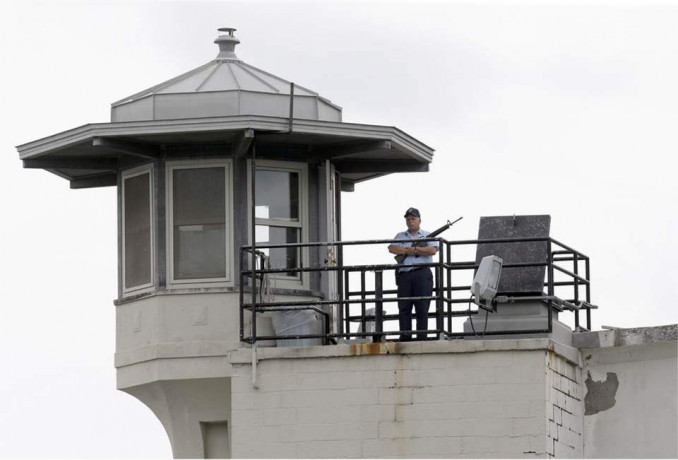 A wave of inmate labor strikes has swept through federal and state prisons across the U.S., preventing business as usual in at least 46 facilities where inmates are forced to labor for little or no pay. This unprecedented, nationally coordinated prisoner action has inspired solidarity protests throughout the country, as supporters have taken to the streets to lift up the prisoners’ voices. Is it possible that even some prison guards are among those taking up the inmates’ struggle?

A Sept. 27 article on Jezebel.com says this is exactly what happened at Alabama’s Holman Correctional Facility. “A group of guards at an Alabama prison went on strike this weekend, out of solidarity with inmates protesting overcrowding and unjust labor practices.”  The article cites a Sept. 26 press release by the prisoner advocacy group Free Alabama Movement which states that “officers have also complained about overcrowding and the need for a mass release, more education and rehabilitation programs, as well as issues with disease and filth.” (tinyurl.com/FAMprisonguards)

However, both the facts and a Marxist analysis of the role of police and prison guards call this account into question. Did Holman Correctional Facility guards actually strike in solidarity with the prisoners’ movement? Unlikely!

Holman Correctional Facility, in Atmore, Ala., has been a focal point of the current movement against mass incarceration and prison slavery. This has included spontaneous prisoner uprisings against deplorable conditions, as well as statewide and nationally coordinated campaigns. Every step along the way, prisoners organizing and fighting have been met with the cruelest repression imaginable by Holman guards.

In 2011, guards stormed a dorm at Holman with riot gear and tear gas after finding a cell phone among an inmate’s personal effects. Prisoners have used cell phones clandestinely for years to document and communicate their conditions to prisoner advocates. Five inmates were injured in the guards’ attack. (blog.al.com, Apr. 5, 2011)

In 2014, during another contraband search, prisoners attacked a guard, causing him to be hospitalized. In March of 2016, some 100 inmates rose up and, taking control of their dormitory, managed to stab Warden Carter Davenport and a prison guard. In a video one prisoner can be heard saying, “We’re tired of this shit, there’s only one way to deal with it: Tear the prison down.” (workers.org, Mar. 14)

Two months later, on May 1, International Workers’ Day, Holman inmates struck to protest prison conditions. Guards retaliated by withholding food and allowing toxic black mold to grow in the showers, which inmates documented with cell phones. (workers.org, May 19) On Sept. 1, an inmate allegedly stabbed a guard, who died two weeks later from the injury. (nydailynews.com, Sept. 18)

It should be remembered that Holman operates the death chamber in which all of Alabama’s executions are carried out.

Most recently, according to a Sept. 21 anonymous report from a Holman prisoner, “Just ten minutes ago, members of the riot team and warden entered c dorm and attempted to confiscate a cellphone from a prisoner and whole c dorm rose up and forced them out of c dorm. The resistance at [Holman] prison in Alabama is strong. Fuck the police! … We were able to force them [out] by showing a collective front of unity.” (itsgoingdown.org, Sept. 21)

Even a cursory glance at Holman’s history of violence and antagonism against prisoners over the past few years should dispel any notion that guards have suddenly changed sides to begin supporting the prisoners’ struggle.

Further, if the guards intended to show solidarity with the inmates’ struggle, why not do it on Sept. 9, when prisoners in Holman and throughout the country launched their historic labor strike? Why wait more than two weeks?

Whatever the reason a handful of prison guards missed work at Holman (and it was the day of a guard’s funeral), the role of prison guards in class society positions them fundamentally at odds with inmates, as well as against all workers and oppressed people. Prison guards, like police, are hired agents of the capitalist class tasked with protecting institutions of capitalism and white supremacy. They ensure the profit of a few at the expense of the many. The long-term interests of the prisoners’ movement can only be realized in disbanding the police and dismantling the prison system.

In their announcement of the Sept. 9 prison strike, inmates liken the prisons today to the slave plantations in the pre-Civil War U.S. South: “Overseers watch over our every move, and if we do not perform our appointed tasks to their liking, we are punished. They may have replaced the whip with pepper spray, but many of the other torments remain: isolation, restraint positions, stripping off our clothes and investigating our bodies as though we are animals. Slavery is alive and well in the prison system.” (iwoc.noblogs.org, Apr. 1)

Like the capitalists they serve, guards’ livelihoods depend on the continued existence of the U.S. prison system and prison slavery. Their interests are opposite and irreconcilable with those of prisoners, workers and oppressed people.

Despite a few sensational headlines to the contrary, Holman guards are just as much an enemy of prisoner justice now as they have ever been.