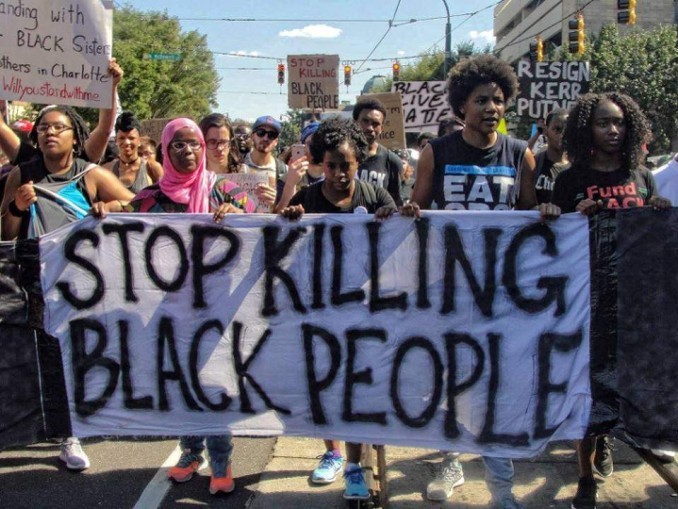 Charlotte, N.C., Oct. 2 — As the righteous fightback against racist police terror continues to hit the streets of Charlotte, the state has been steadily ramping up its attempts to repress and shut down the growing Charlotte Uprising.

Rebellion broke out in Charlotte on Sept. 20 after police murdered a Black, disabled man, Keith Lamont Scott, as he waited in his truck to pick up his child from the school bus. During protests the next night, rubber bullets fired into a crowd by cops killed a 26-year-old Black man, Justin Carr. The police have since framed up another Black man, Rayquan Borum, for the murder. Charlotte Uprising has called for an independent people’s investigation into Carr’s death.

Initially, the police chief and the mayor refused to release any video footage from the police murder of Keith Lamont Scott. But the courageous determination and militant struggle in the streets forced them to release a portion of the videotape. They have said they will release the rest of the tape as well.

On Sept. 30, Charlotte Uprising held a solidarity vigil and rally at Mecklenburg County Jail Central. The demonstration called for the release of uprising arrestees who remain in jail, amnesty for all those arrested, and justice for Keith Lamont Scott and Justin Carr. It expressed broader solidarity with the struggle against racist mass incarceration and the prison-industrial complex, as well as the growing movement of prisoners on strike, who are organizing to tear down the walls.

“We’ve got folks are still in jail, we’ve got folks who are still caged,” Ashley Williams, a Charlotte Uprising organizer, told the crowd. Referring to a court hearing earlier in the day, they said “It was demoralizing to have to sit for an hour to call [Rayquan Borum’s] name , especially for something we know he has no business being in jail for. But it also motivated me to continue to get back out here and remind folks why we’re doing this. … We’re also out here for the millions of incarcerated folks who are resisting the prison-industrial complex by doing a hunger strike for the last several weeks.”

Though the mobilization of the National Guard and state of emergency imposed by the governor officially ended on Sept. 28, a new phase of state repression against demonstrators has begun, particularly against people whom the state has identified as leadership. The Charlotte-Mecklenburg Police Department claims to have issued 95 additional warrants targeting people who have been involved in the rebellion.

Jamal Gill, better known as King Mills, was on the ground the first nights of the rebellion, broadcasting the demonstrations — and the police attacks with tear gas and rubber bullets — to tens of thousands of viewers around the country and the world. His videos have been viewed more than 1 million times.

In a clear targeting by the state for his role in mobilizing people and documenting the rebellion, police arrested Mills on trumped-up charges on Sept. 28, one week after the initial demonstrations. They gave him an obscenely high bail of $320,000, which the movement fought and reduced to a still outrageous $162,000. After being bailed out he was rearrested on new charges just hours later, while eating lunch. Charlotte Uprising packed his first court appearance on Sept. 29 in a show of unity and solidarity.

Police have been following and targeting other activists who have been at the center of the ongoing demonstrations. An organizer was followed after leaving the jail solidarity rally on Sept. 30 and arrested while exiting the car they were traveling in. Another organizer was arrested at a hike with friends the following morning — in a county outside the Charlotte area. The organizer was given a number of bogus charges and issued a flagrantly high bail amount.

It is clear that the state is engaged in a witchhunt against organizers in an effort to demoralize and intimidate the people’s’ rebellion against racist police terror and take the movement out of the streets. The high bails issued by the courts are an attempt to frustrate and drain the resources to bail people out, which have been sustained by an outpouring of donations from across the country.

But Charlotte Uprising has vowed to fight back, stay in the streets, and push back against these attempts by the state to crush the movement. The struggle in Charlotte is entering a critical hour, and the need for the broader movement to come to the defense of the uprising is urgent.

Charlotte organizers have put out a call for a national phone and email campaign targeting the CMPD, Mecklenburg County sheriffs, Charlotte Mayor Jennifer Roberts, North Carolina Attorney General Roy Cooper, and North Carolina Gov. Pat McCrory to demand an immediate end to the repression of demonstrators. More info can be found at charlotteuprising.com. Donations to the bail fund, which are urgently needed, can be made there as well.

Daily actions — including a statewide mobilization and call for solidarity actions around the country on Oct. 4, the two-week anniversary of Scott’s murder — are continuing.

The Black and Brown youth — including many women, queer, trans and gender-nonconforming people — who have been on the frontlines of the rebellion in Charlotte are inaugurating a new period of struggle against racist police terror. The masses of working class and oppressed people in the streets have felt their power, and there is no turning back. The state desperately fears this, and fears the rebellion is spreading. It will do anything in its power to stop it.

The state of North Carolina is also in a position of somewhat relative weakness given the sustained fightback against the anti-trans, anti-worker House Bill 2, which has resulted in huge economic losses. This is especially true in Charlotte — the Wall Street of the South — given its position as the largest city in the state and its immense concentration of capital. Charlotte is the second-largest financial center in the country.

The Charlotte Uprising has additionally inflicted severe economic losses for the ruling class, including the large banks and corporations headquartered here, and has shut down business as usual in the city. Events on the second night of the rebellion, as well as many of the ongoing demonstrations, have taken place in the financial heart of the city.

“The struggle in Charlotte against police terror is no different than the struggle at Standing Rock against the National Guard,” said Lamont Lilly, a delegate to Standing Rock and Workers World Party vice-presidential candidate. “The same repression, the same surveillance, the same terror has been used by the state against not only the Black Panther Party and the American Indian Movement, but against our movements for hundreds of years. Our sense of solidarity, resistance and building unity between and among our struggles will be decisive to fighting back and carrying the struggle forward.”