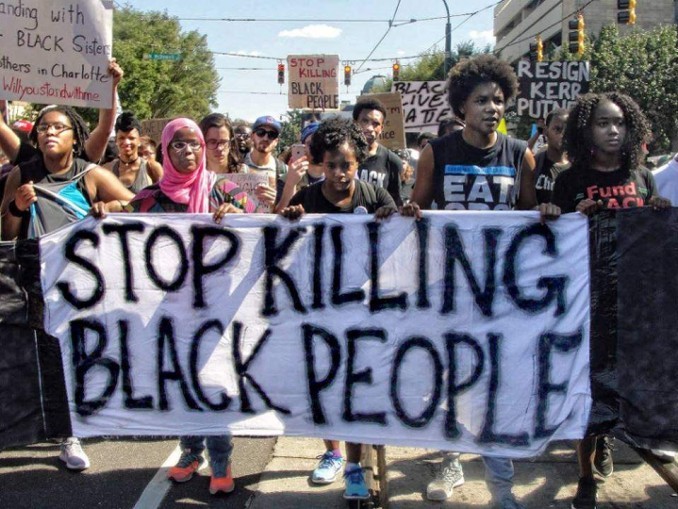 “We are freedom fighters and we must be in the street with our people!” With this powerful statement, Lamont Lilly kicked off the People’s Caravan from Durham to Charlotte, N.C., on Sept. 24. Lilly’s statement foretold of the powerful people’s presence in the national march unfolding that day as part of the Charlotte Uprising.

Lilly is the vice presidential candidate of Workers World Party in the 2016 elections. WWP had scheduled a southern regional conference on socialism, liberation and revolution titled “Hard Times Are Fighting Times” for Sept. 24. After the struggle erupted in Charlotte, organizers decided to cancel the conference and mobilize all participants to join the Charlotte march.

Charlotte Uprising is the movement led largely by The Tribe CLT and the Charlotte Trans and Queer People of Color Collective, which jointly responded to the Sept. 20 shooting of Keith Lamont Scott by the Charlotte-Mecklenburg Police Department. Scott was a Black man with disabilities killed while waiting for his son to be dropped off from school.

Scott’s murder is not the sole police killing Charlotte is rising up to protest. The CMPD has a history of killing people of color and killed only Black people during 2015, according to Charlotte Uprising. During the first night of the uprising, the CMPD killed protester Justin Carr, shooting him at close range in the midst of a peaceful protest in plain view of the marchers.

Charlotte Uprising’s statement calls for the tangible eradication of all forms of oppression. Their list of ten demands focuses on the demilitarization and defunding of the police, as well as justice and reparations for the murder of Keith Scott and Justin Carr (see demands on page 6).

Hundreds of people met Sept. 24 at Marshall Park to begin a march in the streets. Speakers at the rally before the march placed the murders of Scott and Carr in the historical context of the hundreds of years of oppression faced by people of color.

“We’ve been having sleepless nights for a while,” said march organizer Bree Newsome at the opening rally. “This isn’t just about what happened to Keith Scott. This is about what has been happening for 400 years.”

Energy was high and chants strong as over 2,000 people filled the streets of Charlotte with demands for justice and an end to racial oppression. The beats of the percussionists of Cackalack Thunder energized the protesters, while banners and signs spread statements of anti-oppression throughout the city.

Folks marched past the capitalist corporations of uptown Charlotte. Protesters shared water, resources and checked in with one another throughout the march. Many on the march were white allies demonstrating their support for dismantling the racist police system.

In contrast to the love, solidarity and militancy of justice shared among the marchers was the threat from police and National Guard soldiers, large weapons gripped in their hands. They lined menacingly along the sides of the streets and particularly focused on protecting the Bank of America headquarters and the posh Omni Hotel.

The police and military presence, designed to intimidate and deter fighters for social justice, once again demonstrated clearly that the cops’ role is only to serve the capitalist class — to protect the property of the capitalists over and at the expense of the masses of people.

The root of the problem of racist police brutality lies not within individuals, but within the structure of the capitalist system. To survive as an economic system, capitalism needs police to maintain the wealth of the few while maintaining racism and all forms of oppression.

The march wound its way past the major institutions of violence in Charlotte: the courthouse, the jail and police department headquarters. Marchers reconvened at the end of the route in Marshall Park, which has continued to remain a space held for convergence and pre-action unity.

At the post-rally at Marshall Park food was provided for the people. Speakers and musicians were invited to the mic, uplifting the voices of the people. The release of the tapes of Scott’s murder were once again demanded and the crowd echoed the call. Before the event closed, marchers were invited to celebrate and relax after the march and called to reconvene at Marshall Park at 8:30 p.m.

Shortly after the march, the CMPD conceded to the people’s demands and released a clip of the brutal murder of Scott. The clip was missing audio, but it clearly showed the murder of Scott in cold blood.

In response to the incendiary video recording of Scott’s death and the lack of responsibility for Carr’s murder in the streets, marchers again took to the streets that night. The Charlotte Uprising has sustained continued support from the people, and actions are planned through the week to demand justice for Keith Scott and Justin Carr.

For more information on Charlotte Uprising and to sign a petition to police and government officials pledging support for the ongoing struggle against killer cops, go to charlotteuprising.com.

The writers are members of the Durham, N.C., WWP branch.