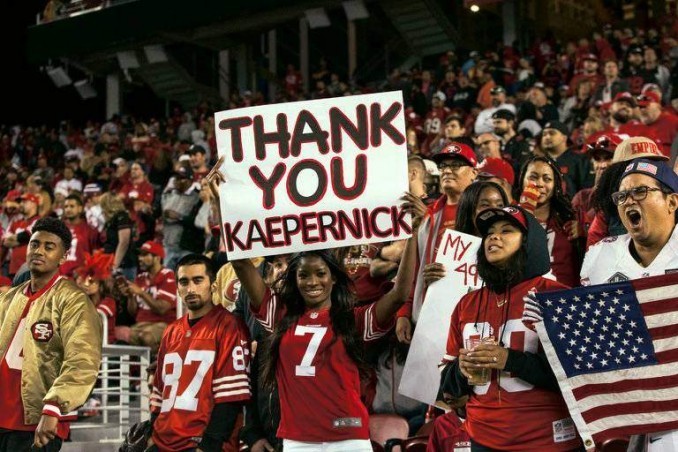 San Francisco 49ers quarterback Colin Kaepernick continued his inspirational protest against racist oppression by kneeling during the national anthem, along with teammate Eric Reid, on Sept. 18.

Although Kaepernick started his protest on Aug. 10 at the beginning of the preseason, he wasn’t noticed until Aug. 26 by NFL.com columnist Steve Wyche at a National Football League preseason game.

When Wyche asked why he was sitting, Kaepernick, an African American, stated he was protesting the police murders of Black people and the general oppression of Black and other oppressed people. 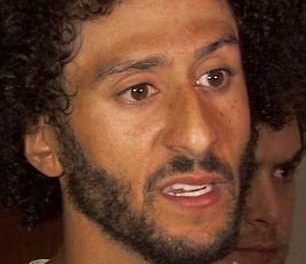 Kaepernick went on to say that he will continue not to stand for the anthem — whether other athletes follow his lead or not — until serious social change is made. Since this statement, other colleagues of Kaepernick’s have either “taken a knee” and/or raised their fists with black gloves. These include players with the Miami Dolphins, St. Louis Rams, Kansas City “Chiefs,” New England Patriots and Denver Broncos; the numbers continue to grow.

This protest has broadened way beyond the NFL. Entire high school football teams at Garfield in Seattle, Mission in San Francisco and Beaumont in Texas, including their coaches, have knelt. The Beaumont Bulls, who are mostly 11- and 12-year-old Black players, knelt for a second week in a row, despite receiving racist death threats.

Harris motivated his team of Black, Latinx, Asian and white youth to kneel, stating, “This is for helping everybody else in the world to understand that Black people and people of color are going through difficulties and they need help. It’s not going to take care of itself.”

Harris’ teammate, Marvin Pusung-Zita, who is Filipino, expressed solidarity with his teammates: “I consider my teammates my brothers, and being that my brothers on the team are Black and oppressed, then of course by all means I’m going to support them and take the knee.” (San Francisco Chronicle, Sept. 15)

High school football players have taken a knee in a growing list of other states.

Many are moved to action

The entire women’s volleyball team at Minneapolis South High School knelt on Sept. 16.  Megan Rapinoe, a white lesbian soccer player, continues to take a knee, despite being ostracized by the U.S. Women’s National Soccer Team. She could face disciplinary charges.

The entire Howard University cheerleaders team knelt at a Sept. 17 game. Two Penn State cheerleaders, Alexus Bazen and Deena Char, knelt and raised a fist before a Sept. 17 game. Brazen said Kaepernick was her inspiration: “I believe that the climate of the world right now is very hostile. All over the news there has been brutality and violence against people of color and I truly believe in … fighting for equality and standing up for what I believe in.” (The Daily Pennsylvanian, Sept. 17)

Many students at the University of Nevada, Kaepernick’s alma mater, sat in the stands during the anthem at a recent game. In the Missouri state Capitol, Sen. Jamilah Nasheed, an African-American representative from St. Louis, refused to stand for the “pledge of allegiance” in Capitol chambers on Sept. 14.

A Kroger store in Springfield, Ohio, sent home Elijah Scott, a 16-year-old African-American worker, after he wore his Kaepernick jersey for the “Wear a Football Jersey Day” on Sept. 11. During his lunch break, he was the only one asked by the manager to change his shirt because it was “disrespectful.” Kroger issued a public apology to Scott.

As the protests continue to grow, Dabo Swinney, the head coach of the Clemson Tigers college team, and Tony LaRussa, the chief baseball officer of Major League Baseball’s Arizona Diamondbacks, have expressed horrible criticisms of Kaepernick on sports shows.

The deputies association (which proclaims itself to be a “union”) has threatened to stop escort security for the players on the way to Miami’s first home game on Sept. 25. The Santa Clara, Calif.,  police also made but rescinded a similar boycott threat against the San Francisco 49ers.

Jumaane Williams, a New York City Council Member, said he will not stand for the pledge of allegiance to protest overtime pay given to New York cop Daniel Pantaleo, who choked Eric Garner to death on July 17, 2014. Garner was captured on video saying, “I can’t breathe,” while several cops threw him to the ground and Pantaleo put him in a chokehold. Pantaleo made over $119,000 in overtime pay in 2016.

Williams stated, “Kaepernick deserves support, not criticism for his actions. What does it say about our country when there is a national outrage over an athlete sitting out the national anthem, but the same outrage isn’t expressed when a young Black man is killed for no reason?”

Leilani Thomas, an Indigenous high school student in Lower Lake, Calif., accused her teacher of lowering her grade in retaliation for her not standing for the pledge of allegiance. Thomas said she has never respected the pledge due to this country’s genocidal treatment of Native peoples.

Kaepernick’s latest protest comes just two days after the fatal police killing of 13-year-old African-American Tyree King in Columbus, Ohio, on Sept. 14. The police claim King was a “threat” because he held a BB gun, similar to the excuse used by Cleveland police to murder 12-year-old Tamir Rice in November 2014.

Just hours before King’s murder, the 330,000-member National Fraternal Order of Police endorsed Donald Trump for president, as did the National Border Patrol Council, in support of Trump’s racist, anti-immigrant views. Kaepernick stated at an Aug. 26 press conference that neither Trump nor Clinton were viable candidates because of their racism.

Moorehead is Workers World Party’s 2016 presidential candidate.  One of her tweets was retweeted by Kaepernick on Twitter to his more than 953,000 followers on Sept. 16. Moorehead thanked him and the Black Lives Matter movement for politicizing young people.