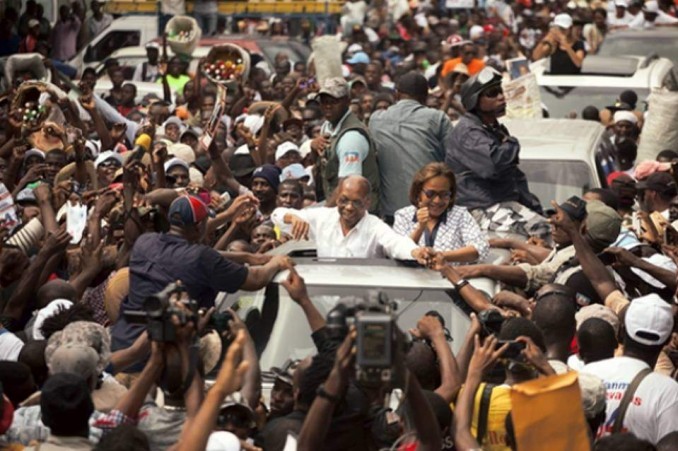 The de facto regime of Haitian President Jocelerme Privert has set Oct. 9 for the first round of presidential elections and January 2017 for a second round, if necessary.

Washington’s power over elections in Haiti was made manifest five years ago when then Secretary of State Hillary Clinton went to Haiti and ordered election officials to put Michel Martelly on the ballot for a second round of voting.

Washington withdrew its electoral funding on July 7. Kenneth Merten, the Department of State’s special coordinator for Haiti, said: “I am confident that Haitians can organize good elections. If the elections are good, the U.S. will not have any problems with the Haitian government.” (Haiti elections blog, Aug. 21)

The arrogance and hypocrisy of the U.S.’s role in Haiti is also clear in Merten’s remark. Think about the reaction in the corporate media in the U.S. if, say, Haiti declared it would accept the results of a U.S. election only if millions of disenfranchised Black U.S. citizens were allowed to vote.

The Provisional Electoral Council has announced that it has cobbled together financing from a number of different government sources and from members of the Haitian diaspora, that is, Haitians living in other countries. Nearly 11 million Haitians live inside Haiti, 1 million in the U.S. and more in Canada, France and the Dominican Republic.

Electioneering began the last week of August. Dr. Maryse Narcisse, the candidate of Fanmi Lavalas (FL), and former President Jean-Bertrand Aristide held a large march on Aug. 29 in Pétionville, a well-off suburb of Port-au-Prince, the capital.

The crowd chanted, “Long live Aristide! There’s our father!” as well as “We’re not here for pay! We’re here for dignity! We’re here voluntarily!” The crowd made it clear that they disputed a public opinion poll putting Narcisse in fourth place.

In a press conference after the march, Narcisse said, “The country is sick in every area, at the political, economic and social levels. We need all the sons and daughters of the nation to be able to cure the disease from which it is suffering. For this, I open my arms to gather all the nation’s children to provide sustainable solutions to the nation’s many problems.” (Haïti-Liberté, Vol. 10, No. 8)

The other major candidates are former Sen. Moïse Jean-Charles, of Dessalines’ Children (PD), a split-off from FL; Jude Célestin of the Alternative League for Progress and Haitian Emancipation (LAPEH); and Jovenel Moïse of Martelly’s Haitian Bald-Headed Party (PHTK).