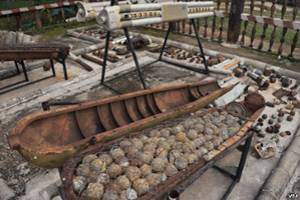 Cluster bomb: A spinning canister sprays 200 bomblets, each loaded with hundreds of metal fragments that explode over a wide area when detonated.

“We flew in real low, in front of that bastard’s house, and I threw the head so it bounced right on his porch and into his front door.” (Anthony A. “Tony Poe” Poshepny, quoted in Asia Times, July 8, 2003)

Tony Poe was a CIA operative who was part of U.S. imperialism’s “secret war” in Laos in the 1960s and 1970s. Not only did he hurl severed heads of Pathet Lao liberation fighters out of aircraft, he also placed their heads on spikes to spread terror.

Poe paid a dollar for every severed ear that his mercenaries collected. He placed them in plastic bags and sent them to the U.S. Embassy in Vientiane, Laos’s capital. For his efforts, Poe twice received the CIA Star — the agency’s highest award.

On a visit to Laos this Sept. 6, President Barack Obama finally acknowledged — but didn’t apologize for — the U.S. “secret war” against that country. “Villages and entire valleys were obliterated,” Obama said. “Countless civilians were killed. That conflict was another reminder that, whatever the cause, whatever our intentions, war inflicts a wrenching toll, especially on innocent men, women and children.” (nytimes.com, Sep. 6)

The “cause” that Obama failed to specify was Washington’s brutal and ultimately futile attempt to stop the liberation struggles in Vietnam, Cambodia and the small nation of Laos, with its population of just 6 million people. In March 1965, after massive numbers of U.S. troops invaded Vietnam, the Pentagon unleashed a devastating bombing campaign on Laos. Some 270 million bombs were dropped on Laos over a nine-year period. Some 580,000 bombing missions were directed at that tiny country — a planeload of bombs every 8 minutes, 24 hours a day, for nine years. (legaciesofwar.org, Sept. 6)

Thousands were killed, whole villages were destroyed, hundreds of thousands of Lao people were driven from their homes, and the country was left desperately poor. 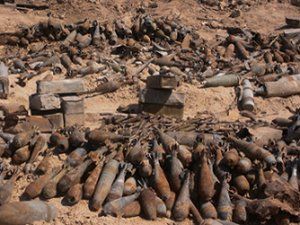 A third of the U.S. bombs did not explode, including some 80 million small cluster bombs. Since the war ended, over 20,000 people have been killed by these bombs, 40 percent of them children, who are attracted by the bombs’ toy-like shape. While the Laotian people have spent decades trying to collect and disarm the bombs, experts estimate that less than 1 percent of the land has been cleared.

On his visit, Obama offered the paltry sum of $30 million per year for three years to help Laos clear the land of U.S. bombs. Experts say that is a fraction of what is necessary to eliminate this deadly threat. The U.S. spent $18 million per day to drop bombs on Laos, every day, for nine years. In 2014, the Pentagon received $600 billion to acquire new weapons with which to wage war.

The U.S. imperialist government’s gesture is not a genuine effort to remove the unexploded bombs from Laos. It is “window dressing” designed to help promote the Trans-Pacific Partnership program, so that workers in Laos, Vietnam, Malaysia and other Asian countries can be intensely exploited by U.S. corporations while the Pentagon keeps control of the Pacific Rim.

The Laotian people see right through this scam. Restaurant owner Dalaseng told a reporter that he is unable to forgive. “The only way the U.S. can make amends is to clear this country, build roads, schools and hospitals,” he said. “Their bombs are still killing our people every day.” (theguardian.com, Jan. 31, 2015)