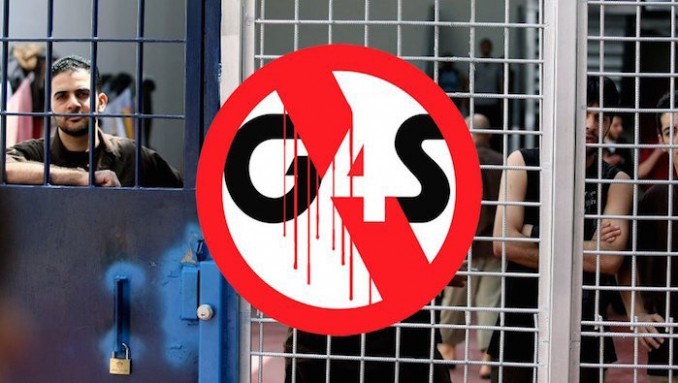 What does Israel’s internment of 7,000 Palestinian political prisoners, including 700 “administrative detainees” held without charge or trial, have in common with the Dakota Access pipeline company’s brutal repression of Native land and water defenders at Standing Rock?

Aside from the support of the U.S. government and an underlying logic of settler colonialism, each benefits from the involvement of British-Danish conglomerate G4S, the world’s largest security company and its second-biggest private employer.

Only three days after private forces contracted by Dakota Access LLC had viciously attacked Indigenous demonstrators with dogs and pepper spray on Sept. 3, G4S confirmed it had deployed “unarmed patrol services” to guard the project. (telesurtv.net)

G4S communications director Monica Lewman-Garcia later claimed the company “had no employees present during the incident on Sept. 3,” but refused to identify the locations or roles of its personnel, or to say if they had supported the attackers. (alternet.org)

“The BNC was dismayed but not surprised to learn that the multinational security corporation G4S has been contracted to provide security services for the pipeline construction on your land by Energy Transfer Partners,” the Palestinian Boycott, Divestment and Sanctions National Committee wrote in a statement to the Standing Rock Sioux tribe on Sept. 9.

“G4S is involved in human rights abuses around the world including in Palestine, where the company provides services to illegal Israeli colonies, to military checkpoints, and to prisons that are infamous for using torture and inhumane treatment against Palestinian prisoners, including children.” (bdsmovement.net)

Three of the Palestinians held in these prisons, Malik al-Qadi and brothers Mohammed and Mahmoud al-Balboul, launched hunger strikes on July 16, July 7 and July 4, respectively, to protest their “administrative detention” orders and demand freedom.

Israeli courts recently “suspended” their detentions, a ruse used in 2015 to convince another “administrative detainee,” Muhammad Allan, to end his hunger strike before his detention was reinstated as soon as he could leave the hospital.

Al-Qadi and the al-Balbouls refuse to end their strikes without agreements for their release.

Each is held under guard in Israel’s Wolfson hospital, where Mahmoud reportedly has “severe chest pains,” while al-Qadi has “fallen into a coma.” (maannews.com)

On Sept. 16, the Samidoun: Palestinian Prisoner Solidarity Network will dedicate a weekly protest of G4S, held at 4 p.m. each Friday outside the company’s New York office at 19 West 44th St. in Manhattan, to the Standing Rock defenders and Palestinian hunger strikers, with the demand, “G4S out of Standing Rock and Palestine!” (facebook.com)

Other actions worldwide in support of each, as well as action alerts and news updates, are posted online at nodaplsolidarity.org and samidoun.net.