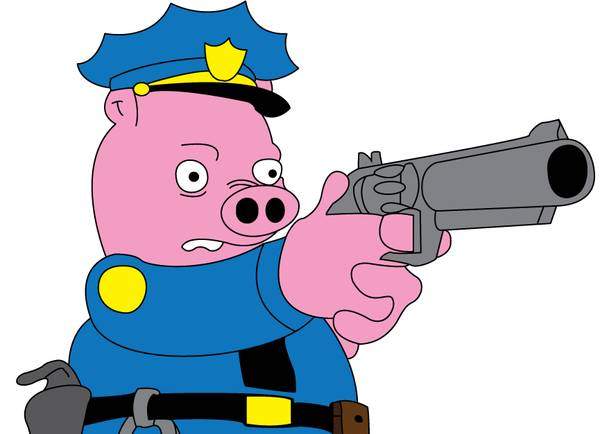 This article is slightly edited and updated from its first appearance in the Jan. 29, 1971, issue of Workers World newspaper. The writer was a founding member and chairperson of Workers World Party.

[Some say] that there are good cops and bad cops, just like there are good capitalists and bad ones. … The truth, however, is that there is objectively speaking not a shred of class identity between workers and the police. The fundamental interests of the workers are diametrically opposed to those of the police and are absolutely irreconcilable with them.

A worker is, above all, a producer. The police officer is a parasite who lives off what the worker produces. No truer words could be said! All the material wealth which is now in the possession of the capitalist class was produced by the workers. When a worker goes out on strike she [or he] is merely trying to retrieve a portion of the wealth which her [or his] labor power produced.

The worker gets back in the form of wages only a portion of what he [or she] produces. The rest is what the capitalist class retains in the form of profit (really the unpaid labor of the workers).

The gross national income of the U.S. last year reached [an] astronomical sum. … It was all produced by workers: Black, Brown, white, men and women and even children. The struggles of all the workers, insofar as their immediate demands are concerned, are merely to retrieve a larger portion of this wealth which they produced for the bosses and which the bosses keep for themselves.

Cops contribute nothing to social wealth

What have the cops contributed to the production of this unprecedented amount of wealth? Nothing at all. In fact, their principal function is to guard the wealth for the capitalists, protect their monopolist profits from the demands of the workers. … That’s the very essence of a cop: to crack the heads of strikers and practice the most inhuman brutality against the Black, Puerto Rican and Chican[x] communities.

A cop is a mercenary hired by the capitalist class through their agent (the city government) to keep the mass of the workers and the oppressed in complete subjection. They utilize all the forces and violence at their disposal whenever the masses rise up in rebellion against the unendurable conditions imposed by the master class.

The police are the most parasitic social grouping in society. When they work — if that’s what it can possibly be called — their labor is directed against the workers and oppressed. Graft, corruption, intimate collaboration with all sorts of underworld figures and enterprises such as gambling, narcotics and a thousand other shady businesses — that’s what cops are really engaged in.

They are utterly inseparable from crime and corruption itself. One could not exist without the other. Both are nourished and supported by the nature of the capitalist system itself. To put the police on a par with the workers is to erase the difference between the persecutors and their victims.

Such incidental operations of the police as traffic control and other related useful functions for society are deliberately tacked on by the government to police control when they in reality should be separate and independent activities of workers apart from the parasitic regular police functions.

What about … ‘Social Democrat’ cops?

The police in every capitalist country are trained in the spirit of civil war against the workers and the popular masses in general. This is so even in the rare cases, like pre-war Austria and Germany, where substantial sections of the police considered themselves “socialists” or “social democrats” because a large section of the populations of these countries were either socialists or communists.

However, at the critical moment when the fascists in Austria made ready to seize power by a coup, the police unanimously and cheerfully lined up with them and opened up a civil war against the workers. In Germany proper, they joined the storm troopers. They played a prime role in Hitler’s attempt to ferret out every militant worker and every progressive person and haul them off to the concentration camps. These same police systematically carried out the torture of hundreds of thousands of socialists and communists, not to speak of the unbelievable atrocities against Jews.

In this country, who does not know that the Klan and the John Birch Society are the most intimate collaborators with the police and in some cities actually control the police?

Who does not know that almost all the strike-breaking agencies in the country work hand in glove with the police? Both are in the service of the industrialists as soon as the workers make an independent move of their own.

Army of occupation in oppressed communities

In the Black and Brown communities, the police play the role of a foreign occupation army and practice a form of cruelty and brutality which differs only in degree from the U.S. occupation army in Vietnam and Cambodia. As a token of the high esteem and affection in which these communities hold the police, they have coined the word “pig” as synonym for cop and this word has passed into the universal language of the oppressed. …

Every cent paid to the police comes out of the hides of the workers. Every cent they get is at the expense of welfare, housing, schools, and other facilities and services that are needed by the people. …

Unlike workers, when police go out on strike [or engage in job negotiations], they are not trying to retrieve money withheld from them for useful work done on behalf of society. Their services are solely and exclusively in the interests of one class of society only: the ruling class. Clarity on this point is absolutely indispensable. If the police find themselves in a controversy with the ruling class over the amount of money they should get as mercenaries, the workers should treat this as an internal struggle in the camp of the enemy and not confuse it with a struggle of their own class.

Of course, there are exceptional cases where police strikers, in a struggle with the capitalist state, have no alternative but to turn for support to the workers. These cases are rare indeed, such as the Boston police strike of 1919, which Calvin Coolidge, then governor of Massachusetts, broke. In such cases it is the duty of the workers’ leaders to adroitly intervene in the struggle.

In doing so, they must make clear that their intervention is not motivated by any class solidarity with the police (who on the morrow of their victory will again proceed to club the heads of striking workers) but out of motives of working-class expedience — that is, to help the police undermine the capitalist state structure. The longer a police strike lasts, the more it undermines capitalist law and order. In that task, a revolutionary worker should help, while helping even more to build workers’ self-defense groups.

The various parasitic elements which constitute the capitalist state are always in conflict with each other on how to divide among themselves the juiciest portions of the city, state and federal treasuries. Like thieves, they are invariably at each other’s throats, each seeking a greater share of the loot. These parasitic elements comprise the police, detectives, prison officials, executioners, various state and local anti-subversive squads, and the judicial bureaucracies. These are not to be compared to firefighters, sanitation workers or other workers who have been co-opted by the government into the capitalist state apparatus so as to keep their wages in check. These workers perform useful tasks and will continue to do so even in the highest form of socialist society. …

Will there be cops when classes are gone?

One way for a Marxist to judge whether a specific social group in the present capitalist state setup is parasitic or really performs socially necessary and useful work is to ask whether such groupings would be needed in a socialist system after the abolition of all class rule. Clearly police will not be needed. With the abolition and disappearance of all vestiges of class privilege, the need for a coercive special force, even a workers’ militia, becomes superfluous.

However, men and women who work to make a more sanitary social environment and make it free from all sorts of hazards, such as fire, will of course be needed. If even in a socialist society the need for a coercive force such as police continually diminishes as the socialist system develops to a higher and higher form, then all the less do we need police in a capitalist society. Here its fundamental function is to suppress the working class and in particular use the most brutal violence against the Black, Chican[x] and Puerto Rican people.

It is to be noted that the current wave of police insurgency comes after a considerable period when they have been engaged in actual civil war against the Black and Brown communities. The ruling class has felt itself more and more indebted to the police precisely because of this. Having been highly flattered for their brutal role in the recent period, the police are now demanding extra privileges and remuneration for their stormtrooper role in those communities and on the college campuses as well as in the recent strike struggles throughout the whole country.

The police have also become more vociferous in denouncing the so-called lenient judges and demanding that the government “take the handcuffs off the police.” This cry is nothing but a fascist demand for the right to unrestricted use of force and violence against the civil population. It is in this context that we must view the police strikes [and job negotiations] as well as the general historical role that they play in the class struggle.

That the working class needs no capitalist police to secure and defend them was never more clearly demonstrated than in the first great proletarian revolution more than a hundred years ago — during the Paris Commune. Scarcely had the Paris Commune been established (the first truly working class government had just begun to survey the tasks ahead of it) when the world had its first vision since the dawn of class society of what would happen to the entire capitalist police establishment on the day of the proletarian revolution.

“No more corpses at the morgue, no nocturnal burglaries, scarcely any robberies,” says Karl Marx about the Paris Commune in his celebrated book, “The Civil War in France.”

“In fact, for the first time since the days of February 1848,” he remarks, “the streets of Paris were safe and without police of any kind.”

Is there a capitalist government anywhere in the world that can make such a boast even for one day? Is there any large city anywhere in the capitalist world which is free even for a single day of any crime and could do without any police of any kind as was the case with the Paris Commune? Merely to ask the question is to answer it. To put an end to crime it is first of all necessary to put an end to the thoroughly criminal rule of the bourgeoisie. It is their very existence which breeds not only crime and corruption but virulent racism, imperialist war and genocide.

To infuse the working class with a revolutionary attitude toward the police is at the same time ideological preparation for the overthrow of the capitalist class.