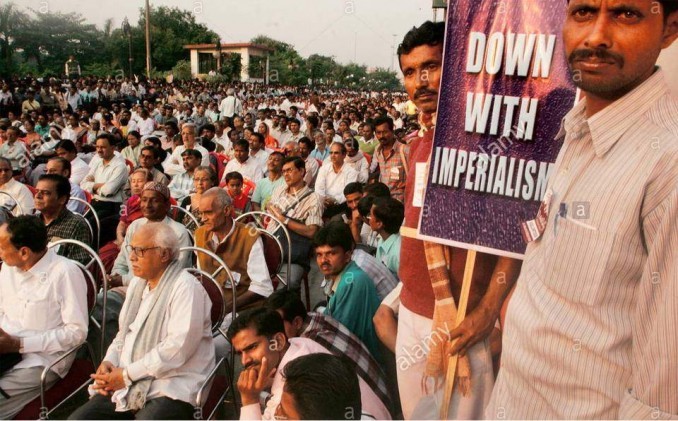 WW reproduces this statement from an important anti-imperialist organization in India.

The All India Anti-imperialist Forum (AIAIF) is viewing with great concern the signing of the Logistic Exchange Memorandum of Agreement (LEMOA) between India and USA, which will allow mutual use of military bases, though both parties are circumspect about its wider implication, promptly qualifying its ambit by mentioning its application on a case-by-case basis.

The ruling imperialist bourgeoisie of India has since long cherished a dream to appear as a powerful military power in the Asian region to boost its economic engine and to this end it has anchored with USA. Similarly USA has a strategic interest to augment its presence in the Pacific region to counter the rise of China.  The U.S. Navy has a plan to deploy 60% of its surface ships in this region.

The USA wants to prop up India to meet a rising China, and it has already emerged as India’s second biggest supplier of defense equipment. The Agreement will also give the USA the opportunity to use the Indian bases if the situation develops for launching military attacks in Afghanistan and Central Asia as well as Middle East and East and Southeast Asia.

Both the countries’ industrial-military-bureaucratic complex, being faced with ever-deepening recession pervading the entire globe, with no hope of its ending, has opted for this agreement to stimulate the economy through militarization. It has nothing to serve the interest of the toiling millions of our country.

In the name of national interest and progress, a smoke-screen to befool the common people, this pact will serve the industrial-military-bureaucratic  complex of our country and they have no qualms to sell the integrity and sovereignty of the country to further their interest. We appeal to the people of India to build up powerful, united protest movements against the anti-people Logistic Exchange Memorandum of Agreement.