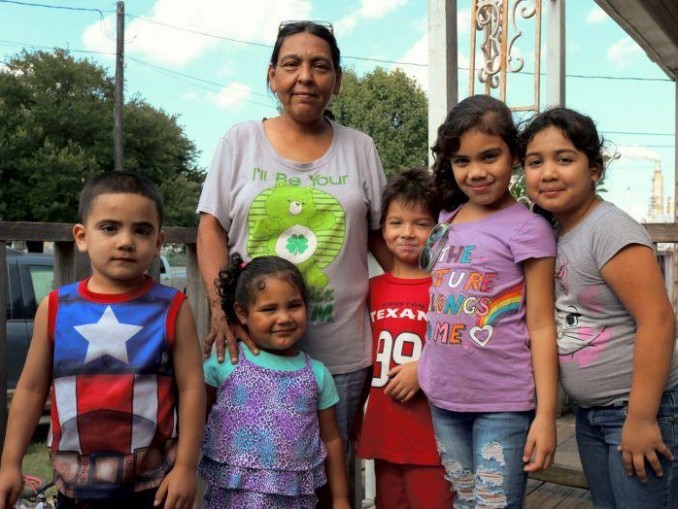 Paula and her family on the porch across from the Valero “toxic waste” refinery.

The smell in the Manchester neighborhood of Houston is like hot coffee — nutty, bitter and sweet. This smell isn’t coffee, though. It’s the smell of benzene spewing from the nearby Valero oil refinery at 1.5 to 4.7 parts per million. This is the threshold at which most humans can begin to smell the chemical, and what the Centers for Disease Control calls a possible indication of “acutely hazardous exposure.”

Across the street from the refinery is Paula’s house, sparsely furnished with brightly painted walls. There are heavy drapes over the window. Despite the bright sun outside, it’s dark and cool inside. The television flashes in the background on mute as her grandchildren crowd together in the living room. The oldest grandson complains he has a splitting headache.

Paula tells me the family has been living there for about four years. Six children and four adults live in the three-bedroom house. When asked about the neighborhood, she sighs: “It’s okay. It’s peaceful. It’s quiet. Except all the chemicals that are around. But that’s about the only thing that concerns us.

“Sometimes we see something that happens, and we get scared, and there’s been times that they have shut down the roads and they don’t let us know what’s going on. We have to go and ask. And they tell us: ‘There’s nothing to worry about.’”

Paula says activists, scientists, journalists and even politicians have visited the neighborhood to ask about the situation. But nothing has changed.

“We’re planning to move as soon as we get a little bit more money together.” The house was the best available that they could afford. The family has three adults working and $700 a month to spend on rent. That $700 gets them a house next to a toxic waste factory.

“My daughter, she works at a dry cleaner. My son, he works at a pharmacy, at CVS. And the step-dad, he cuts yards.”

She frets about the children not performing well in school. She does not mention that the children live, sleep and eat in pollution that may be damaging their ability to learn and putting them at risk for degenerative brain illnesses.

Paula tells me she’s never voted in her life. “It wouldn’t change anything.”

Poisoned in the neighborhood

According to my own assessment of the Manchester neighborhood’s air monitoring data, in 2015 there were 4,325 hours that exceeded the EPA guidelines for safe air. That amounts to roughly 180 days of air that was poisonous to breathe.

On Oct. 18, the air monitoring station half a mile from the plant entrance measured 6,073.4 ppm at 6 a.m., the highest count for the year.

In the 1990s, local Latinx activists fought to keep the city from opening a new high school nearby. After all, was it fair that their children would be forced to study, eat and play in this poisonous environment?

The city of Houston cynically responded to the community’s concerns by opening the high school in 2000 and naming it after Cesar Chavez. Now, through a specially tailored “environmental magnet” program, the students have the chance to learn how little the ruling class values their lives when it placed their school among an oil refinery, a tire plant and a toxic waste dump.

Houston is notorious for its lack of zoning. A friend who grew up here said he attended a daycare center next to a strip club. Hunter S. Thompson wrote, “Houston is a cruel, crazy town on a filthy river in East Texas with no zoning laws and a culture of sex, money and violence.” (Common Dreams, Aug. 6, 2014)

But tens of thousands of families live in Houston in the midst of environmental racism caused by more than lack of zoning and a supposed focus on “sex, money and violence.” According to the census, the Manchester neighborhood in Houston is 97 percent Latinx. Thirty-six percent live beneath the poverty line. Of the 1,630 residents, 43 percent speak English “less than well.”

Families in Manchester retire to bedrooms yards away from tankers of explosive chemicals running by on train tracks. According to the area air monitor, major spikes in air pollution often happen at night or in the early morning hours, while both elders and youth alike are dreaming.

How well would the families of the oil barons who run Texas sleep if they faced the same situation?

The answer is: Not well at all! The slow massacre would be a scandal. The national media would raise hell. Blockbuster films would be made about the activists who put the polluters in jail and made them pay reparations to the local community.

But wealthy white families are not being poisoned. These are working-class people of color.

While Texas politicians continue to receive millions of dollars in campaign contributions from companies like Valero, while the U.S. continues to run on capitalism that relies on Black and Brown bodies for fuel, the residents of Manchester are expected to accept their fate and die in silence.

Nevertheless, resistance to environmental racism continues, as in 2012 when local residents coordinated with Indigenous activists in other parts of the United States to blockade trucks entering the Valero refinery and stop the Keystone Pipeline, rallying behind the banner asserting “Valero Kills.”