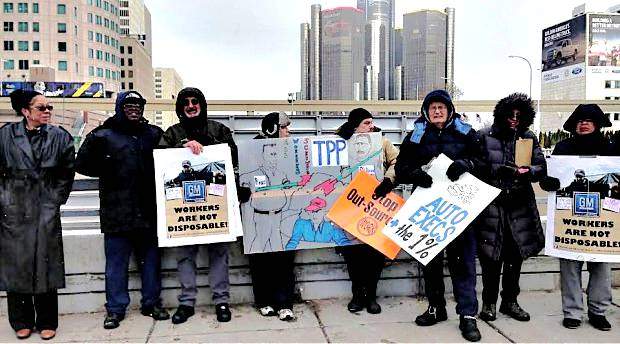 Rank-and-file autoworkers and supporters of the Autoworker Caravan protest the “gigantic profits” of auto companies Jan. 10 outside the North American International Auto Show in Detroit.

“Constant revolutionizing of production,” Karl Marx and Frederick Engels wrote in 1848, “uninterrupted disturbance of all social conditions, everlasting uncertainty and agitation distinguish the bourgeois epoch from all earlier ones.”

These words, written almost 170 years ago, are truer today than ever before, with the auto industry a prime example. Whenever the bosses at General Motors, Ford, Chrysler or their overseas rivals announce some new restructuring, the end goal is always the same: higher profits, fewer workers.

Only a month ago, the CEO of Fiat Chrysler Automobiles (FCA), Sergio Marchionne, said of that corporation: “I think we will be de-carred in the U.S. by [the first quarter of] 2017.”

After being “de-carred,” FCA will build only trucks and sport utility vehicles in the U.S. By assembling products with the highest profit margin, FCA can “close the operating [profit] margin gap with our competitors.” (Detroit Free Press, July 28)

FCA’s major product reshuffling, which members of the United Auto Workers were told of during last year’s contract negotiations, involves taking the Dodge Dart out of Belvidere, Ill., and the Chrysler 200 out of Sterling Heights, Mich. The upheaval will move the Jeep Cherokee from Toledo, Ohio, to Belvidere, and the Ram truck from Warren, Mich., to Sterling Heights. The Warren plant would get a low-volume, high-priced Jeep Wagoneer. The Dodge Viper would be discontinued, costing 150 jobs.

Workers had assumed then that the Dart and the 200, less profitable to build than trucks and SUVs, would be moved south of the U.S. border and be assembled by low-paid workers. But, by getting out of the small and midsize car business altogether, FCA has taken an even more drastic step.

Since July 5, when a shift at the Sterling Heights Assembly Plant (SHAP) was eliminated, 1,420 workers have been on indefinite layoff by FCA. Most had already been on intermittent layoffs during the first half of the year. After 20 weeks on layoff, they cannot collect state unemployment benefits. Union-negotiated supplementary unemployment benefits run out after 13 to 52 weeks, depending on years of service.

Supposedly, all of these workers should be called back when the next generation Ram truck is launched at their plant, but how do they pay their bills now?

Even when SHAP is back up to full speed, employment at the Warren Truck Assembly Plant is projected to fall from 2,400 to 1,000 when it loses the Ram. Only a portion of these workers will be picked up by SHAP. Technological advances will, as Marx put it, “revolutionize” the process to require fewer hands.

Overall, the FCA’s profit-driven overhaul is expected to cause a net loss of 900 jobs in metro Detroit — even at current sales levels.

In 2013, the Canadian Auto Workers merged with the Communications, Energy and Paperworkers of Canada to form Unifor, now in contract negotiations with the Detroit auto companies. With no new product commitments from GM as yet, Unifor members in Oshawa, Ont., are worried about their plant closing. The chant on the floor is, “No product, no contract!”  Oshawa already experienced the closing of GM’s truck plant in 2008. Now, Unifor has just 23,000 hourly workers at all three companies.

The future of FCA’s Brampton, Ont., plant, which produces the full-size 300, Charger and Challenger, is also uncertain. CEO Marchionne has stated that the 300 could be produced in Windsor, Ont., alongside the minivan.

Across the Atlantic, the impact on the auto industry of Britain’s exit from the European Union is the subject of speculation. Ford and GM have 25 percent of the British market and GM’s British Vauxhall division produces for export to the Continent. Now import tariffs could make vehicles more expensive, impacting sales and jobs.

Vauxhall’s Ellesmere Port plant, with 2,000 workers, could be on the chopping block. “GM indicated cost cutting” — read job-cutting — “was on the cards as the effect of Brexit could cost it up to $400m [million],” the BBC reported July 21. GM’s Opel division, which closed a plant in Bochum, Germany, in 2014, might also shutter more plants. Already Opel workers’ hours have been cut, with GM blaming Brexit.

Ford has no plants in the U.K., but exports from the EU to Britain. The Brexit vote pushed down stock values at Ford, GM and even FCA, which has only 2 percent of the British market.

Ripple effect of a multiplier industry

Mass layoffs in auto are said to cost eight jobs indirectly for every job cut directly — in parts-supplier plants, steel mills, tire companies, restaurants and bars around the plant, and public jobs affected when the tax base drops. Unifor-commissioned studies estimate over 30,000 jobs would be lost indirectly if either FCA’s Brampton or GM’s Oshawa plant closes. In Detroit, suppliers affected by restructuring include Martinrea, which has already announced it will close due to the axing of the Chrysler 200.

The possible job loss projections are based on current sales, which in the U.S. have surpassed sales in 2006 — before the auto recession sent sales tumbling. Since then, tens of thousands of UAW jobs have been eliminated.

Over the decades, auto plant closings have had a racist, disproportionate effect on Black autoworkers, whose ranks were decimated when plants in Detroit and Flint were closed while newer suburban plants stayed open.

The new rounds of layoffs will have a similar racist impact. Sales rebounded after the auto industry bankruptcy — in no small part due to relaxed credit terms and loans to buyers that stretched payments out over up to eight years. The companies made record profits by hiring workers for less, under the two-tier pay structure. Thousands of oppressed youth were able to get union jobs that, even with a lower wage, paid more than double minimum wage. Now they will be the first to be laid off in the latest restructuring.

Around the world, jobs are being cut even in the midst of record sales and profits. Another crisis of capitalist overproduction, accelerated by unpayable loans, would devastate autoworkers and their communities.

The labor movement worldwide must revive the demand for a shorter work week.