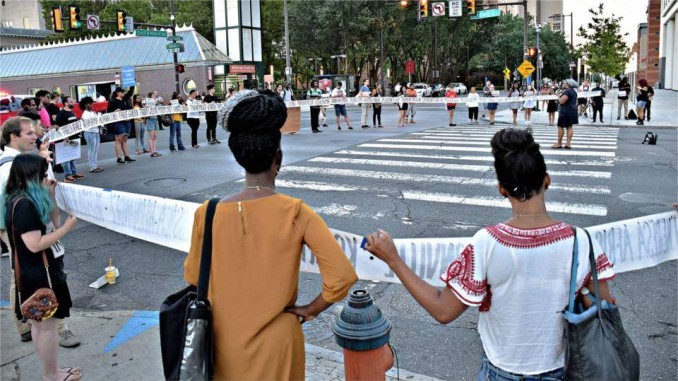 Over 100 demonstrators gathered at North Broad and Cecil B. Moore Avenue near Temple University on Aug. 3 to pay tribute to three Black women who were victims of state violence and “misogynoir.” (Misogynoir is the word created by queer Black feminist scholar Moya Bailey to describe the racist and sexist hatred directed at Black women and girls.) All three women were killed within the same week.

Korryn Gaines was murdered by police in Baltimore County, Md., on July 31 during a shootout when police used a militarized SWAT team to deliver a warrant to her home. Gaines was killed and her 5-year-old son was injured. Police also scrubbed her social media accounts after the incident, removing the video she had posted of the confrontation.

The body of the young Black trans woman Skye Mockabee was found in a parking lot in Cleveland on July 30. She was the seventeenth trans person killed in the U.S. in 2016. The average life expectancy of trans women of color is 35 years. Mockabee was only 26.

Joyce Quaweay was murdered at home in Philadelphia on July 29 by her boyfriend Aaron Wright, a former Temple University police officer, and his friend, Marquis Robinson, who is still on the force. She was beaten to death with fists and a police baton after Wright decided she wasn’t “submissive enough.” Her murder was witnessed by her children who were home at the time.

All the speakers at the rally were Black women and trans women of color.  Toward the end of the rally, a long scroll with the names of dozens of women of color who were victims of state violence was carried into the intersection, which was blocked by demonstrators as the names were read.