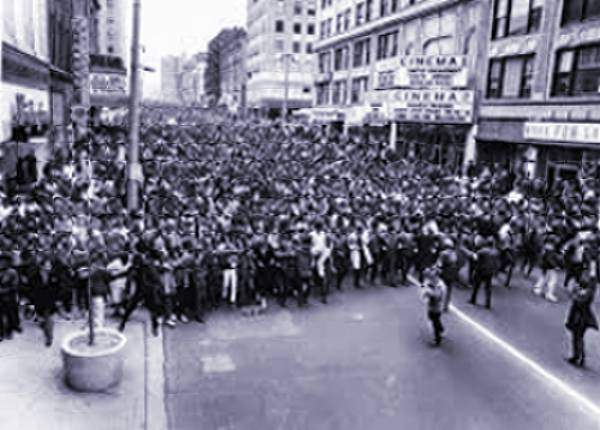 On Christmas Eve in 1974, Black teenager Jerry Brookshire was killed by white Milwaukee policeman Raymond Marlow. The cop claimed his gun fired — by accident — as he fell because Brookshire resisted arrest.

Eyewitness Ola Mae Davis said that Marlow deliberately shot Brookshire as the unarmed 16-year-old was climbing a fence. For telling the truth, “Davis had her house firebombed, along with the motel she moved into, and she also received countless threatening phone calls.” (“Black Panthers in the Midwest” by Andrew Witt)

That same December two African Americans were killed during a police raid on an apartment building. Cops claimed they were looking for a murder suspect — who wasn’t found. As a result, Johnnie Starks was shot to death by police, and Mary Pendleton died of smoke inhalation from a fire ignited by police tear gas canisters.

Two years before, Jacqueline Ford — a 22-year-old Black woman — was shot and killed in her own home by Snead Carroll, a white detective who claimed he had slipped on the stairs. (New York Times, May 28, 1972)

But no cops were ever jailed for these killings.

Milwaukee was the last big manufacturing center that the Great Migration of African Americans from the South to Northern cities reached in large numbers. In 1940, the city had just 8,821 Black people, 1.5 percent of Milwaukee’s population.

The small size reflected the deliberate racism of Milwaukee’s capitalist class. During World War I, only 11 out of the city’s 2,000 factories employed any African Americans.

In 1923, three detective squads arrested 39 African Americans for “vagrancy,” meaning they were unemployed. Twenty-seven were sentenced to 90 days of slave labor by Judge Michael Bienski, who also said Milwaukee had no use for “their kind.” (“Black Milwaukee, the Making of an Industrial Proletariat 1915-1945” by Joe William Trotter Jr.)

What made this discrimination all the more repulsive was that Milwaukee then had a so-called socialist mayor, Daniel Hoan. This Milwaukee type “socialism” was called “sewer socialism” by genuine revolutionaries like those in the Industrial Workers of the World.

Hoan was proud of the city’s new public baths and sewage plant. But he said nothing about racist landlords that confined African Americans to the city’s 6th Ward.

While Milwaukee had a strong labor movement, many unions in the American Federation of Labor in the 1920s and 1930s prevented Black workers from joining.

“Workers of All Countries, Unite!” was emblazoned across the letterhead of Milwaukee’s Brewery Workers Union, yet no African Americans were hired in the city’s breweries until 1951.

During the labor upsurge of the 1930s, communists and other activists organized some of Milwaukee’s big plants. They fought racism in hiring and promotion. Albert Stergar and Earl Plaster — both of whom joined Workers World Party — fought alongside Communist Party members to force the Nash car body plant to hire Black workers in 1947. Nash was later merged into American Motors.

Boycotts led by Assemblyperson Lloyd Barbee shut down the city’s segregated schools in 1964 and 1965. When Dr. King was assassinated in 1968, 25,000 people marched through downtown.

In that period, the Allen-Bradley company — whose owner Harry Bradley was a founder of the racist John Birch Society — still refused to hire Black workers. When Father James Groppi led a sit-in there in 1968, less than 1 percent of the plant’s 6,000 workers were African American.

Today, almost nobody works at Allen-Bradley. The Bradley family sold the company to Rockwell Automation in 1985 and used the dough to expand its Bradley Foundation, an $800 million slush fund for right-wingers.

Milwaukee continues to be grossly segregated. The City Council voted down fair housing bills introduced by Vel Phillips — the council’s first African-American member — until the Black community rebelled in 1967.

The A.O. Smith, Allis-Chalmers and American Motors factories have shut down. Deindustrialization and joblessness went hand-in-hand with mass incarceration. One out of every 25 African Americans in Wisconsin are locked up.

Ernest Lacy was beaten to death by three members of the Milwaukee Police Department’s “tactical squad” in 1981. Derek Williams died in police custody, “gasping for breath and begging for help,” in 2011. (Milwaukee Journal Sentinel, Oct. 27, 2012) No cops were charged.

Police racism and homophobia allowed the notorious Jeffrey Dahmer, who actually ate his victims, to kill 16 people, almost all youth of color. Police officers John Balcerzak and Joseph Gabrish turned 14-year-old Konerak Sinthasomphone back to Dahmer despite the pleas of two women who were trying to help the youth. Later that night the Laotian immigrant was tortured to death and dismembered by Dahmer, who was finally arrested in 1991.

The cops were fired after tapes of their homophobic “jokes” about “reuniting the lovers” were revealed. Judge Robert J. Parins, former president of the Green Bay Packers football team, reinstated the bigots.

Gabrish is now a captain in the Grafton, Wis., Police Department. Balcerzak was elected president of the Milwaukee Police Association in 2005 and served until 2009.