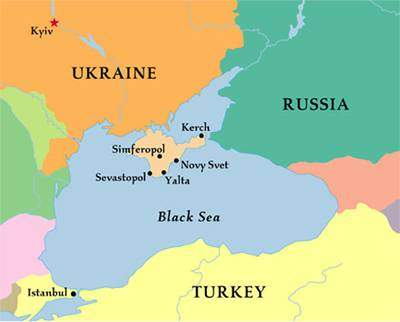 While millions of people around the world have suffered under a brutal heat wave this summer, one of the most dangerous hot spots on the planet has nothing to do with the weather.

Over two consecutive nights on Aug. 7 and 8, Russian government personnel thwarted a series of attacks aimed at sabotaging the important tourism industry in Crimea, among other targets. These assaults are planned by groups crossing the border from Ukraine. A Russian soldier and a Federal State Security (FSB) agent were killed during these actions. Russians call the attackers “terrorists.”

The events in and around Crimea must be seen in the context of the ongoing, multilayered campaign by Washington and its junior partners in the NATO military alliance to whip up war fever against Russia.

Several attackers and a large cache of weapons were captured, including explosive devices, anti-personnel bombs, grenades and standard-issue Ukrainian armed forces weapons. The FSB reported that the terror ring planned to “target critically important infrastructure” and “destabilize the situation in the region as preparations for elections of federal and regional authorities are underway.” (Tass, Aug. 10)

The FSB says the attempted attacks were organized at the highest levels of the Ukrainian Defense Ministry’s intelligence service. Russian television broadcast a video confession by Yevgeny Panov, reputed leader of the Ukrainian operation, an employee of the UDM who previously fought in the war against the independent Donbass republics. Panov gave extensive information on the operation’s locations, methods and chain of command.  (DONi News, Aug. 12)

At first, Ukraine denied knowing who Panov was, accusing Russia of kidnapping a random person and forcing him to make a false confession. That story didn’t hold up for long, though; residents of Panov’s hometown in Ukraine’s Zaporozhye region reported seeing him leave home the day before his capture in Crimea. Kiev then changed its story and claimed that Panov was merely in Crimea to check on property he owned there when he was caught up in the FSB operation. (Colonel Cassad blog, Aug. 12)

At a press conference after the attempted attacks were publicized, Russian President Vladimir Putin said, “I would like to turn to our American and European partners” — the backers and financiers of the Ukrainian regime. “I believe it is already obvious for all that today’s Kiev authorities are not seeking to solve problems through negotiations but are switching to terror. This is a very alarming thing.” (Tass, Aug. 10)

Besides the incursion in Crimea, Putin cited the Aug. 6 assassination attempt against Igor Plotnitsky, head of the Lugansk People’s Republic. He was seriously wounded by an explosive device in his car. (RT, Aug. 6) After surgery to remove shrapnel threatening his liver and spleen, Plotnitsky was expected to recover.  But many political and military leaders in Donbass have been killed or seriously wounded in similar attacks since the beginning of Ukraine’s “Anti-Terrorist Operation” in 2014.

At the Aug. 10 press conference, Putin discussed a planned meeting of France, Germany, Russia and Ukraine, the Normandy 4, on the sidelines of the G20 meeting in China Sept. 4-5, to discuss the Minsk ceasefire agreement between Kiev and the Donbass republics.  He said it was now “pointless,” since the Ukrainian government had demonstrated it was not interested in negotiating a political settlement.

This was a notable change in tone for the Russian government, which had previously bent over backwards to keep the Minsk negotiations alive despite more than a year-and-a-half of constant ceasefire violations by the Ukrainian side.

Russia also shored up its defenses on its western border with Ukraine and tightened border security in Crimea. In response, Ukrainian President Peter Poroshenko ordered the Ukrainian armed forces on high alert near the Crimean border and along the entire front with Donetsk and Lugansk. (Associated Press, Aug.11)

The Crimean peninsula, located between Russia and Ukraine on the Black Sea coast, is renowned for its scenic views, beautiful beaches and therapeutic waters. It was part of Russia before and after the 1917 socialist revolution. In 1954, during post-war economic reorganization in the Soviet Union, Crimea became part of the Ukrainian Soviet Socialist Republic and remained part of Ukraine after the USSR’s breakup in 1991, although many residents still identified with Russia.

On March 16, 2014, weeks after a U.S.-backed and -financed coup overthrew the legitimate Ukrainian government and installed a junta of oligarchs, pro-Western neoliberal politicians and fascists, the people of Crimea voted overwhelmingly in a referendum to leave Ukraine and return to Russia.

The Crimean people’s quick mobilization and Russia’s securing of the region’s borders scuttled one of Washington’s key goals in the coup — to seize and occupy the large Russian military base on the Black Sea, leased by Ukraine to Moscow in perpetuity.

The U.S. and European Union have used the so-called Russian annexation of Crimea as a pretext for NATO’s military buildup in the region and for anti-Russian sanctions.

On Aug. 18, major U.S. media — which had scoffed at Russian reports of the foiled attack in Crimea — publicized Poroshenko’s unsubstantiated claim that a “full-scale Russian invasion” may be in the offing.  “The probability of escalation and conflict remains very significant,” the Ukrainian president said in a televised speech to military personnel in the Lvov region of western Ukraine. “We don’t rule out full-scale Russian invasion.” (Chicago Tribune, Aug. 18)

Poroshenko continued, “If the situation escalates in the east and in Crimea we don’t rule out the possibilities we will be forced to introduce martial law and announce a [further] mobilization [military draft].” (Reuters, Aug. 18)

Coming just days after Kiev’s sabotage teams were captured in Crimea, and Ukraine’s more than two-year brutal war against the population of Donetsk and Lugansk, these charges stood reality on its head.

Since the destruction of the USSR 25 years ago, the domination and breakup of an independent capitalist Russian Federation has been a primary goal of Wall Street, the Pentagon, and Republican and Democratic party leaders.

Over the past decade, Russia’s international prominence has increased as an alternative source of aid and trade for countries struggling to withstand U.S. military and economic power.  Moreover, Washington has found its attempts at internal subversion in Russia stymied, so pressure has grown for a more direct military solution to the “Russian problem” via accelerated NATO expansion into eastern Europe and the former Soviet Republics.

In June 2016, NATO staged its largest war games since the Cold War. Dubbed Anakonda-16, this mobilization of 30,000 troops from 20 countries on Polish territory was a provocation against Moscow. (The Independent, June 6)

Anakonda-16 set the stage for the NATO conference in Warsaw July 8-9, where the imperialist military alliance pledged to increase troops and weapons throughout eastern Europe, build ballistic missile systems in Romania and Poland and provide a “complex package” of additional aid to the far-right junta in Kiev. (DONi News, July 10)

Meanwhile, Kiev was escalating the already tense situation in the military zone bordering the Donetsk and Lugansk People’s Republics, pouring in fresh troops and weaponry, and accelerating daily, bloody attacks against civilian targets.

During the week of July 9-15, Ukrainian shelling in the Donetsk People’s Republic killed eight people. (DONi News, July 15) The United Nations reported that 9,500 people have been killed in Ukraine’s war with Donbass.

As early as July 8 — when NATO officials gathered in Poland for their war conference — Alexander Lukashevich, Russian ambassador to the Organization for Security and Cooperation in Europe, warned of “a dangerous buildup of military activities of Ukrainian armed forces in different parts of the contact line in Donbass. There are reports about cleansings carried out by Ukrainian forces in settlements near the contact line — Maryinka and Schastye.” (Tass, July 8)

Lukashevich also pointed to reports of “deliveries of foreign military equipment, including unmanned aerial vehicles” — that is, drones which help target attacks.  The Ukrainian military used them immediately.   So on July 15, drones aided a daylight artillery attack outside Donetsk, the capital, which targeted Alexander Zakharchenko, head of the Donetsk People’s Republic.  He was unharmed. (DONi News, July 15)

Week after week, Donbass and Russian officials’ warnings of growing Ukrainian aggression have been ignored by Western officials and gone unreported by the corporate media. Meanwhile, Ukrainian troops have targeted homes, schools, water pumping plants and other vital civilian infrastructure.

After the NATO conference, fresh supplies of U.S. weapons and war materiel poured into Ukraine. Donetsk intelligence reported that on July 13, the “Partnership for Peace” of the U.S. military command in Europe delivered 2,500 rifles, machine guns, grenade launchers and other weapons to the International Center for Peacemaking and Safety in Starichi, western Ukraine. (DONi News, July 29)

At the end of July, the U.S. Air Force, under cover of a “humanitarian cargo” of medicines, also delivered 16 tons of ammunition. (Russia Insider, July 29)

The U.S. Embassy in Kiev announced July 28 that dozens of Ukrainian soldiers had just finished training on the use of surveillance drones at a Pentagon facility in Alabama. That day, the embassy reported the delivery of “72 hand-launched surveillance drones” to “transmit live video images and location data to ground control stations.”

U.S. Marines staged a provocative amphibious landing operation on the Black Sea coast in Ukraine’s Odessa region on July 27, timed to coincide with Sevastopol Navy Day celebrations in Crimea. The war games, with more than 220 U.S. and Ukrainian troops and 15 amphibious vehicles, were unreported in the West. (DONI News, Aug. 2)

In the U.S., anti-Russian propaganda spiked as the Democratic National Convention took place in Philadelphia July 25-28. Damning emails were leaked showing how Democratic nominee Hillary Clinton’s supporters conspired against the Bernie Sanders campaign.  Her backers attempted to deflect attention by accusing Russia’s government of spearheading the leaks and seeking to influence the U.S. presidential elections.
The people’s armies of Donetsk and Lugansk are on the highest alert, as informed sources anticipate a Ukrainian offensive starting at the end of August — before cold weather sets in, and with plenty of time for propaganda effect before the U.S.’s November elections.

No one believes Ukraine can conquer the republics militarily on its own. But as the Kiev regime and its masters in Washington have repeatedly shown, they are more than willing to sacrifice the lives of Donbass civilians and soldiers on both sides, to escalate the international war fever against Russia.