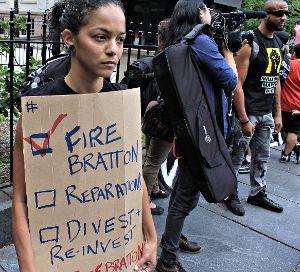 Abolish the police! A revolutionary concept has sprouted organically from the intense ferment and combative spirit of the Black Lives Matter movement.

Grassroots encampments in three cities challenge the vicious defenders of racism and class rule at the roots.

They renamed City Hall Park here “Abolition Square” and focused the occupation on a world without police and state terror. They have kept this territory liberated since Aug. 1, defying an extreme heat wave.

This occupation is part of a national effort, including Chicago and Los Angeles, that focuses on the current and historic role of systematic police terror in maintaining white supremacy.

Colin Ashley, a People’s Power Assembly organizer, has since Day 1 been part of the logistics team, which helps pull together food supply, cleanups, nightly housing on park benches, workshops and cultural programs. Ashley was helping to set up the daily dinner at Abolition Square on Day 12 while filling in WW:

“Activists are continuing to engage in a conversation dedicated to the question of abolishing the police and prisons and what it legitimately takes to get this. We are discussing strategic ways of doing community outreach, as well as ways of maintaining links with the multiple groups that have shown solidarity with Abolition Square.”

Ashley summarized three major accomplishments of the occupation: “First, activists have created a solid foundation for a coalition of grassroots organizations dedicated to Police Abolition as a radical vision.

“Second, groups and individuals have created workshops on self-defense, cop-watch and know your rights. Third, the occupation has also become a center for historical and political workshops on such varied topics as the History of White Supremacy, Black and Native Solidarity, Immigration and Imperialism, Global Political Prisoners, Queer Liberation As an Anti-Police Movement. The workshops held here at Abolition Square can be reproduced around the city.

“In undertaking this occupation we have tapped into what is seemingly a national Black Lives Matter movement’s desire to diversify tactics as well as escalate demands.”

Flyers handed out at the occupation are headlined “Abolish White Supremacy, Abolish the Police.” They proclaim: “If we are serious about ending white supremacy, then we need radical change. It is time to re-imagine security in our communities.”

“The demands of the occupation are:

3. Reparations for all victims of police violence from the NYPD budget.”

On Day 2 of the occupation, hated Police Commissioner Bill Bratton announced he was stepping down. But no announcement was made ending the vicious police policies known as “broken windows” that he initiated.

An Orientation Guide explains why the action was called and why raising demands for abolition and not reform of the police and prison system is the way forward for the Black Lives Matter movement. The guide explains that no amount of body cameras or retraining will change the racist, violent nature of the police. Such fake reforms further increase the budget and the power of racist NYPD, it says.

The guide lists principles that give examples of how people are able to organize themselves socially without police intervention. These principles include no cooperation with or involvement of NYPD or any law enforcement entity and no closed-door discussions with politicians. No physical or mental harm to others. Sexual violence, including harassment, will be dealt with swiftly.

Nate Peters, a People’s Power Assembly organizer, who has been a daily presence at the encampment, told WW: “#AbolitionSquare has drawn a line in the sand: The police are an inherently racist and brutal institution. If we want to abolish police brutality, then we must abolish the police.”

This revolutionary demand and the courageous activists who have raised it deserve broad support from the entire Left and workers’ political movement.

Many different kinds of active support are urgently needed. Spending time at the encampment during the day, especially morning shifts, is especially helpful. Also bringing food and supplies and participating in workshops and classes.

Supporters everywhere can spread the word and share the message — Abolish the Police.