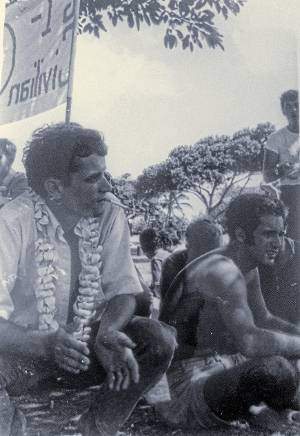 One thousand people hushed as Airman 1st Class Louis “Buffy” Parry announced his act of conscience.  He would end his “complicity with the U.S. military and its crimes against humanity” in the war against Vietnam, then at its height, and take sanctuary at Honolulu’s Church of the Crossroads.

It was Sunday, Aug. 10, 1969. Parry and I were keynote speakers at the Nagasaki Day anti-war rally at Waikiki Beach Park in Honolulu.

Even had it remained an individual act, Parry’s stand was powerful. But following the rally at Waikiki Beach Park, seven other service members left the military for the sanctuary. It was becoming a mass action.

For the preceding two years, I had been working in the GI anti-war movement. The Honolulu protest’s rapid growth presented an opportunity to stop the Pentagon in its tank tracks.

A mile east of Waikiki Beach Park was Diamond Head Monument, a volcanic crater and symbol of Honolulu with views of all of Oahu island. Volcanic eruptions had given birth to all the islands.

The park was filled with palms and 12-foot-wide Banyan trees whose many trunks, intertwined like great serpents around a central column, support one tree’s branches and leaves. The anti-war civilians and GIs sought similar mutual support.

We marched parallel to the Pacific beaches along Waikiki and Ala Moana parks, and then another two miles through Honolulu’s city center, quiet on Sunday, to the Church of the Crossroads. That evening, we counted eight service members in the sanctuary. We all slept at the church.

The next day, we learned that Black Marines at the nearby Kaneohe Marine Corps Air Station had torn apart the mess hall to protest prejudicial job assignments and racist harassment. This rebellion added another dimension to volcanic movements shaking the military.

An accident of timing put me on Oahu. The anti-war movement in Hawai’i, urged by a student at the University of Hawai’i, had invited Andy Stapp, the chairperson of the American Servicemen’s Union, to speak. Stapp’s spouse, Deirdre Griswold, was about to give birth, so he sent me from New York in his place.

The ASU was an anti-war and anti-racist organization of low-ranking GIs. As of mid-1969 it had some 8,000 active-duty members. Tens of thousands of GIs read its monthly newspaper, The Bond.

I had nothing like Stapp’s charisma to keep an audience spellbound, nor his skill with media. My realm was the union office, writing letters to GIs on a manual typewriter, doing headquarters and logistics work as circulation manager for The Bond. Now suddenly I was on point at the front lines and the only ASU organizer on site.

The Hawai’i Resistance, the church elders and the ASU had a tiger by the tail. The tiger was growling. My job as ASU organizer was to make the tiger grow.

To the Marine officers at Kaneohe MCAS, what the Black troops did was a mutinous riot. To the ASU it was a righteous uprising. The rebellion presented a challenge to the anti-war movement.

Could we unite the military resistance at the Crossroads church with this outbreak of the Black Liberation struggle that was sweeping the U.S. in 1969, in this case right nearby at the Marine base?

After a night sleeping on the church floor with some 50 young anti-war people who might have been at home at the iconic Woodstock, N.Y., concert that took place a week later, I proposed we hold a demonstration picket at the gates of Kaneohe in solidarity with the Black Marines.

The night after this symbolic action, a group of Marines from Kaneohe brought food they had liberated from the mess hall to the church to help feed those taking sanctuary.

These Marines were not yet willing to risk open resistance and disobedience, but they still donated under the table something we could put on the table at the Crossroads.

Maybe my vision was too optimistic, but the seeds of a widespread rebellion were there. To even conceive of it now, 47 years later, you have to recreate the mood of August 1969. You also have to know what a military center Oahu was.

Leading to this struggle

As early as January 1968, the Tet Offensive of the Vietnamese National Liberation Front inflicted heavy casualties on U.S. troops, demoralized U.S. government leaders and began to turn the U.S. population against the war. Democratic President Lyndon Johnson, identified with the war, was forced to withdraw from the 1968 election.

In June 1969, Nixon announced plans to gradually remove U.S. troops. The U.S. forces were to be replaced by expanding the puppet army of South Vietnam in a plan known as “Vietnamization.”

Anti-war resistance also grew within the military. For the GIs, the war was an immediate life-and-death issue. The troops’ hostility mounted year by year. Some Pentagon officers worried the war machine would fall apart.

Marine Col. Robert D. Heinl Jr., a military historian, described this development: “As early as mid-1969, an entire company of the 196th Light Infantry Brigade publicly sat down on the battlefield. Later that year, another rifle company, from the famed 1st Air Cavalry Division, flatly refused — on CBS-TV — to advance down a dangerous trail.” (“The Collapse of the Armed Forces,” Armed Forces Journal, June 7, 1971)

Hawai’i: Pentagon in the Pacific

Ever since a 1893 planters’ uprising led to the U.S.’s illegal annexation of the Hawaiian nation in 1898, the Hawai’i Islands and especially Oahu have been a center for the U.S. military in the Pacific.

It is 30 miles from Haleiwa, on the northern coast of Oahu, to the Church of the Crossroads in central Honolulu. On the island of lush tropical forest and superb beaches, five major military bases of the U.S. Army, Navy, Air Force and Marines were located.

On our 30-mile drive to Haleiwa to pick up leaflets, my host pointed out the warships in Pearl Harbor, which housed 60,000 sailors, and nearby Hickam Air Force Base. He pointed out the gap in the mountains where the Japanese planes first appeared beyond a cloudbank before bombing Pearl Harbor in December 1941 in the battle of two imperialist powers for the Pacific.

We continued along the Kamehameha Highway past Wheeler Airfield and Schofield Army Barracks, which housed 15,000 Army troops. And then to the east of Honolulu, on the windward coast of Oahu, was the Kaneohe Marine base.

In 1969, tens of thousands of U.S. troops, among the more than half a million doing a year’s service in Vietnam, were rotated out for “rest and recreation” in Hawai’i. If you wanted to reach out to U.S. troops, including those in Vietnam, the place to do it was Oahu, Hawai’i.

The American Servicemen’s Union had a friendly working relationship with the anti-war movement in Honolulu, known as the Hawai’i Resistance, and shipped them hundreds of copies of The Bond each month to distribute to the troops.

The Church of the Crossroads congregation itself resolved to “provide moral support and such other assistance as may be appropriate to persons whose conscience is in conflict with requirements of the state,” including “sanctuary for those who engage in nonviolent forms of resistance as a matter of conscience.”

It’s with that background that the Hawai’i Resistance announced and promoted the GI-Civilian Walk for Peace set for Sunday, Aug. 10, 1969, to commemorate the atomic massacres of Hiroshima and Nagasaki. The American Servicemen’s Union co-sponsored the action.

“Leaflets urging men to ‘Break the Chains of Military Injustice’ were distributed on bases and in Waikiki and emphasized the ASU’s demands, focused on winning a bill of rights for GIs, especially the right to refuse orders to participate in the illegal war in Vietnam.” [Source of quotes, unless otherwise noted, is Hawai’i Resistance report, 1969]

As the sanctuary movement grew, the ASU approach was to define the gathering of GIs at the church as a “union meeting.” In the vision of the ASU organizers, none of the actions of the rebellious GIs should be considered illegal. It was the war that was illegal, unconstitutional, had never been declared, and its prosecution meant further Pentagon war crimes against the Vietnamese people.

The GIs were like other workers, who had the right to come to the Church of the Crossroads simply as an act of forming their own organization.

Based on my reports of the initial few days, the ASU office in New York, with the support of Workers World Party, sent a delegation of four organizers to Honolulu, including two AWOL soldiers who joined the GIs in sanctuary. I reluctantly returned home to less dramatic support tasks with The Bond.

On Sunday morning, Aug. 17, the 18 GIs then in sanctuary received a standing ovation from 350 people at the church. The church elders, however, acted worried that Parry’s act of conscience had expanded to become an open confrontation with the U.S. Armed Forces.

The ambivalent church elders enforced a moratorium against seeking new sanctuary members. Nevertheless, the number of GIs in sanctuary grew to 35 in the next three weeks.

Meanwhile, the military surrounded the sanctuary with police and intelligence units that prevented GIs from entering and arrested those who left the church. Unless the movement could be constantly expanded, it would be weakened by the constant confinement and tension among the GIs and their civilian supporters.

Finally, on Sept. 12, about 40 military police stormed the grounds at Crossroads, kicking in all locked doors including those to the church. Many GIs had already slipped out. The MPs found and arrested only eight of the men, but the police action ended the sanctuary.

Throughout the five weeks, the focus of the ASU delegation was this: “How can we continue to expand this movement until it affects the entire Armed Forces, from Western Europe to Vietnam?” To move in that direction one needed to have the attitude and the ideology that looked upon the collapse of the U.S. imperialist Armed Forces as both positive and possible.

The Crossroads was another chapter in this struggle, even if it fell short of its apparent potential.

The Hawai’i Resistance continued its work with anti-war GIs for the next six years. The ASU’s AWOL Pvts. John Lewis and Greg Laxer avoided being sent to Vietnam and continued organizing at Fort Dix, N.J. Both later became leaders at the ASU office.

Susan Steinman, a student at the University of Hawai’i who initiated the invitation to the ASU, became the Hawai’i organizer for the ASU and later a national field organizer working out of the ASU national office in New York City. Later, she became a lead organizer for the Communication Workers; her work led to union representation for 18,000 women telephone operators.

While continuing to bomb Vietnam, Laos and Cambodia for the next six years, the Nixon administration kept withdrawing U.S. troops. On April 30, 1975, the Vietnamese liberated their country.

Based on a chapter in Catalinotto’s forthcoming book, “Turn the Guns Around: Mutinies, Soldier Revolts and Revolutions.”