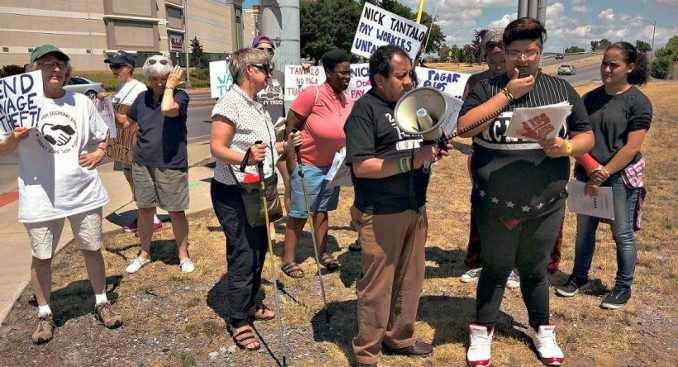 The Workers Center’s of Central New York scored another big win in an ongoing series of confrontations with employers who steal wages from temporary, low-wage and immigrant workers. Earlier WCCNY actions have returned pay to workers in construction, food service and janitorial services. (Workers World, March 27)

Andrea and Lourdes were hired by a subcontractor to clean at the Cheesecake Factory in upscale Destiny Mall in Syracuse. The Latina women said: “We cleaned bathrooms, swept, mopped, picked up chairs, cleaned the windows, dusted tables. We worked at night. We did what no one else wanted to do.”

But when paycheck time came, the subcontractor which hired them disappeared, ignoring phone calls and owing the women almost $400 — the equivalent of a month’s rent. (WAER Syracuse Public Radio) 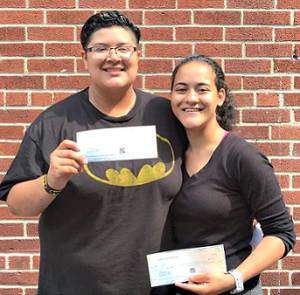 Andrea and Lourdes celebrate victory in winning back their stolen wages.

The women joined the WCCNY and led an organizing campaign that culminated in a loud, bullhorn rally outside the mall on July 28. Then a forceful delegation got past security to present demands at the Cheesecake Factory and to the temp agency it employs, Majestic.

WCCNY organizer Rebecca Fuentes wrote on Facebook: ”One day after the action the workers have been paid! We will continue to do outreach to uncover these injustices and organize to end wage theft and unfair labor practices in our communities.”

Low-wage and immigrant workers are most frequently targeted by unscrupulous employers in wage-theft schemes. Because subcontracting is now so prevalent in all industries, temporary workers find it almost impossible to figure out which employer is legally liable for unpaid wages.

WCCNY organizer Nikeeta Slade emphasized the importance of the Center’s organizing directly with workers to demand their rights and demanding wages directly from businesses that benefit from their work. “A lot of people are not familiar with the term ‘wage theft,’ which is what happened to these two workers,” Slade said. “They need to know that it is illegal to not be paid.” (WAER, July 27)