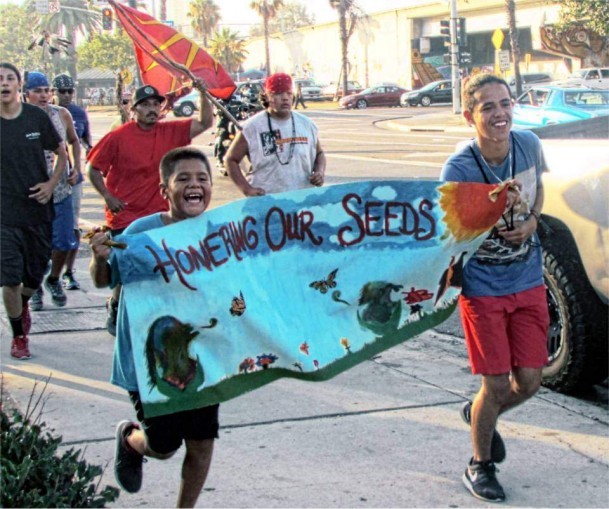 Many people gathered in beautiful Chicano Park in San Diego, Calif., awaiting the arrival of the Peace and Dignity Journey runners on July 23. These journeys are spiritual runs which start in Tierra del Fuego, Argentina, and Chickaloon, Alaska. Runners then travel for six months through hundreds of Indigenous communities, joining in their traditions. The journeys began in 1992 and take place every four years.

The 2016 theme is running for the “Seeds of Our Future” — the seeds planted in the ground and the seeds that are the future of communities.

The Border Tributary Route runners journeyed through Tijuana, Mexico, and San Ysidros’ militarized borders between Mexico and the U.S. Then the runners made several stops in San Diego County, including in Chula Vista, National City, Logan Heights and Barrio Logan. Their route joined the main route and runners at the Centro Cultural de la Raza and World Beat Center in Balboa Park. United, all runners journeyed to Chicano Park for the Closing Circle and community celebration.

Runners were scheduled to arrive at 6 p.m. A little after 5 p.m., word circulated that they were just leaving Balboa Park and would be late. San Diego Peace and Dignity organizers were busy preparing delicious food, including fresh fruits and vegetables donated by the community. On the stage the Danza Azteca Dancers and Drummers were preparing spiritually for the Closing Circle ceremony, while other attendees anxiously waited. First came the motorcycle escort that signaled the runners were in sight, and then the runners appeared carrying a banner that read “Honoring the Seeds.”

The purpose of the Journeys is to unite Indigenous peoples with all peoples. At the Circle’s closing, all the runners laid down their staffs that represent prayers collected from all the communities, groups and individuals runners met during the journey. These staffs will be carried by runners for the duration of their journey. All runners will come together at the Kuna Nation in Panama City, Panama, where the many Indigenous nations from North and South America will unite.

The runners meet in the center of the two continents to fulfill the prophecy of the Eagle and the Condor. It states that then all Indigenous Peoples in the Western Hemisphere shall be reunited spiritually in order to “heal our nations so we can begin to work toward a better future for our children and generations to come.”

On July 27, runners on the Calipatria Tributary Route are scheduled to journey to Calipatria State Prison and arrive by 1:30 a.m. They are “Running for Justice for Orlando Watley and all Political Prisoners.” Watley, a Chickasaw Native and Bantu African from Corcoran, Calif., was charged with crimes he did not commit and has been held captive for 23 years.