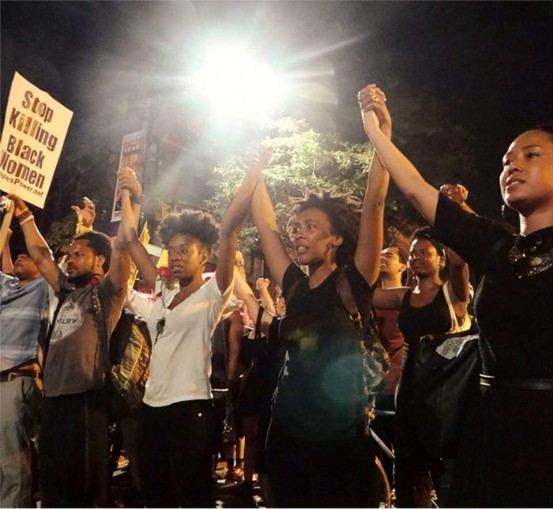 Statement issued by the People’s Power Assemblies of New York City on Dallas and the future of our movement, which was reaffirmed after Baton Rouge, La.

As #BlackLivesMatter activists, we are always being asked to condemn violence.

Let it be clear: We have consistently condemned violence.

We have condemned the violence of police brutality that has unapologetically and without punishment robbed Black women, trans people, children and men of their lives.

We have condemned the whole of a system for its complicity in housing discrimination, the school-to-prison pipeline, media stereotypes about Black people, political and legal forms of institutionalized racism and the system of unfettered capitalism that has always been dependent on the exploitation of Black lives.

We have condemned environmental racism and forms of state neglect that have poisoned the health of our children. We have condemned transphobia, ableism, sexism and homophobia as additional and intersectional systems of oppression that dismantle the lives of the most marginal of Black people.

We have condemned this country for its historic, continual and multiple forms of violence that it has waged on Black people … and we will not leave. … This battle is ours to win … and you will be made better for it.

And our voices have gone unheard.

In the face of our condemnation, we have been told all lives matter, as if our pain, our grief and our anger somehow represent a denunciation of your lives. They do not.

In the face of our condemnation, we are told to speak in soft tones, be polite and be nondisruptive. This is about our lives! Our children’s lives. Our lovers’ lives. Our family members’ and friends’ lives. Our Black lives.

This is how the NYC mayor, Bill de Blasio, responded to the attacks in Dallas. His response to us and our condemnations was to increase the size of the police. We continue on — unheard.

Let it be clear: It is you who must condemn. Condemn racism. Condemn this history of racial oppression: its continuation, its persistence.

When you say “All lives matter,” mean it! Speak the words: “Black lives matter.” Engage in action to make it so. Or are we not a part of your “all lives” that actually matter?

Let it be clear: We do not believe in this system that tells us to wait and have patience. That speaks of incrementalism and reform while we die. That speaks platitudes about violence and peace while we are killed.

We believe in a people’s movement for Black lives. All lives will matter when Black lives matter.