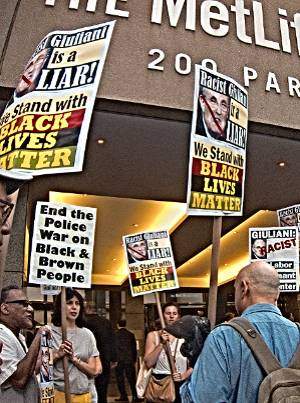 Rudy Giuliani’s July 18 speech to the Republican National Convention is rumored to be his audition for the post of secretary of Homeland Security, if Donald Trump were to become president.

Giuliani began his political career by presenting himself as a U.S. attorney crusading against corruption and organized crime in New York City.  He ran for mayor of New York in 1989 and lost to David Dinkins, the first Black person to become mayor of the city.

He ran against Dinkins again in 1993 and won, later winning a second term against Ruth Messenger.

Giuliani’s campaign against Dinkins, who lives in Harlem, got brutal in 1992, when he egged on a rally of 10,000 cops at City Hall as they were protesting Dinkins’ plan to institute a civilian review board to rein in police brutality. The media noted that all the cops were armed and some were drunk.

After he became mayor, he appointed Bill Bratton as police commissioner. The two began a policing policy of “zero tolerance of broken windows,” which is just another name for mass incarceration.

MSNBC knew all this when they invited Giuliani to spew his racist claptrap on the air on July 8. On air, he called Black Lives Matter “inherently racist” and “the reason there’s a target on police officers’ backs.”

About 50 people gathered July 14 in Grand Central Station and marched from there to protest Giuliani’s racism at his office in the Metlife Building. It was covered by TV channels 11 and 47 as well as the New York Daily News.